The revolver shown in the attached photos was brought home from WW2 by my grandfather. I know it is Japanese, but I don’t know too much other than that. I have figured out how to open it for cleaning. Isn’t this a great system! I just open the top, push the triggerguard forward, pivot the side open, and lift out the left grip. How about ammo? I don’t know the caliber, and nothing I’ve tried seems to fit properly. 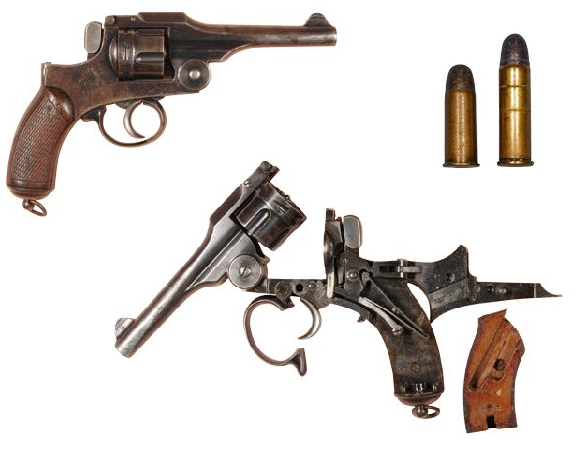 You have a Japanese Military Revolver developed in the 26th year of the reign of Emperor Meiji. Collectors call it the Type 26. These were made between 1893 and 1935 in the Tokyo Arsenal, and about 59,000 were produced. I’m sure you noticed that you can’t cock it by hand; it is double-action only.

The cartridge for this revolver is 9 x 22 mm centerfire; it is unique. Original cartridges are quite scarce. I have added a photo of an original 9 mm cartridge from my collection alongside a .38 Special cartridge for comparison. I have some modern cartridges headstamped “Midway 9 mm Jap Rev.” I don’t know if this ammunition is still available.

You can learn pretty much all there is to know about this revolver in “Japanese Military Cartridge Handguns 1893–1945,” Atglen, PA: Schiffer Military History, 2003, 384 pages, by Harry Derby and James D. Brown.

The letters are C.G.H., standing for the Citizens Guard of Hawaii.  The C.G.H. was a volunteer militia that saw combat when it aided the National Guard of Hawaii in putting down the Rebellion of 1895. The volunteers were primarily armed with Winchester Model 1876 muskets and Model 1886 rifles, such as yours.

This is a difficult collecting specialty because the members of the C.G.H. could also carry their personal weapons in addition to, or instead of, the issued rifles. And, not all of the issued weapons were stamped C.G.H. Some records are extant in the State Archives listing the guns by serial number, but at least one of the ledgers is missing. And to make matters worse, the late John A. Bell — a recognized authority on weapons of Hawaii, reported that there have been instances of fake C.G.H. stampings.

However, your rifle is in the correct serial number range, and the style of the letters on the buttstock is correct. It is correct for the rifle to have a round barrel and factory-installed swivels.

Question:  from H. Mull, The Netherlands

Enclosed is a photo of a small Russian pistol that came out of the Soviet Union a few years ago. I can see from the printing on the barrel that it is caliber 5.45 x 18 mm. It is very flat. The grip panels are no wider than the slide, and they seem to be made of aluminum. There are a few other marks, but they don’t tell me much. There is an 85 by the serial number on the frame, could that be for 1985? What exactly is this little pistol? 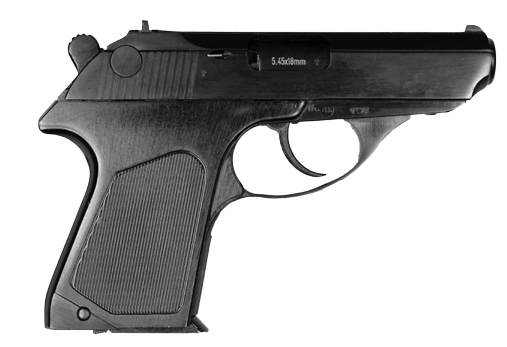 You have a pistol called the Model PSM, after the Russian designation Pistolet Samozaryadniy Malogabaritniy (pistol, self-loading, small,). This pistol was introduced for use by the Soviet military and police about 1975, and the 85 on your pistol does indicate manufacture in 1985. These pistols are manufactured by the Izhevsk arsenal.

This pistol has about the same overall dimensions as the Walther PPK, but is about a third of an inch thinner. Supposedly this small, flat, thin pistol was designed for carry by high-ranking military and police officers, and undercover officers, so that they wouldn’t be burdened with the size and weight of the Makarov. Because the bullet will penetrate the standard 20-layer Kevlar police vest, some people claim this is a KGB or assassin’s gun.

I had some business with the Soviet Police about twenty years ago, and during a visit to their headquarters at Petrovka 38 in Moscow, I was allowed to fire the PSM at a couple of American-made Kevlar vests they had. I can personally attest that the bullets easily penetrated the vest. I fired the complete magazine of eight cartridges at two different brands of vests. Also shown is a photo of two 5.45 mm cartridges from my collection alongside a 9 mm Parabellum round.

Attached is a photo of the left grip on a Colt Model 1862 Police revolver, serial no. 45600 with post-1868 small London proof marks. You will see a quatrefoil figure stamped into the grip. This four-leaf emblem is found in heraldry, architecture, military, and other decorative uses. Have any of your readers seen this mark on other firearms? What might it mean? 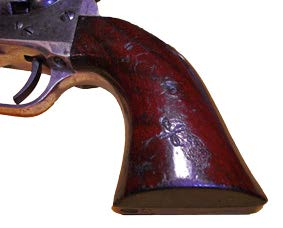 We have not seen this mark on other firearms. In the U.S. Marine Corps, quatrefoil refers to a four-lobed decoration on the top of a warrant or commissioned Marine officer’s dress and service caps. Perhaps some of our worldwide readers can comment on this mark as used on a Colt revolver.

For many years I have had this exquisite little carbine in my gun collection without really knowing much about it. Overall length is 27-1/2” and the barrel is about 14 inches. The caliber seems to be about .69.

You can see the lock is marked Brescia 1862, but that is about all I know. 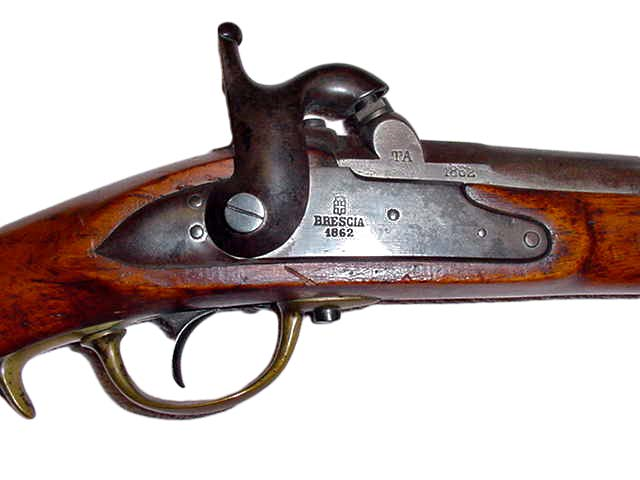 The designation of this Italian carbine is Pistolone da falegnami di fanteria modello 1860 according to Luciano Salvatici in his excellent book “Pistole Militari Italiane 1814 – 1940.”

This translates to pistol for carpenters of the infantry. These would probably be the soldiers called sappers or pioneers in other armies. This short carbine was manufactured in the government arsenal in Brescia, Italy.