Much of the lore of Colt early rearms is made of conjecture rather than documented fact, so when additional facts emerge, a whole new part of the story is revealed. The Colt Dragoon revolver is a popular piece with collectors and always elicits interest as new facts are presented, especially so since many records were lost in the factory re of 1864. Here is a little bit of the Colt story.

One particularly small batch of Late rid Model Dragoons were those marked “C. L. Dragoons'' on the last of the barrel. By small, I mean approximately 105 guns, only one percent of total production of what has become called the ird Model Dragoons. Of these, collectors know of fewer than twenty ve survivors. My personal database, assembled over many years, records twenty one serial numbers and descriptions.

Figure 1 - My 8" barrel civilian Dragoon with its original holster.

The C. L. Dragoon is a standard ird Model Colt Dragoon, .44 caliber, 6 shot revolver, most made with seven and half inch barrels with a few having eight inch barrels. Most seven and a half inch barrel guns are of the four-screw version (i.e. set up for a removable buttstock and having a folding rear sight). A single specimen (#17136) still is mated with its original matching number buttstock. they all have standard brass grip straps and trigger guards-- the frame, hammers and lever assembly are color-case hardened and the barrel and cylinder are blued. As might be expected from a batch of guns rounded up by an agent

to ll a Southern order, the “C.L. Dragoons exhibit a variety of styles. Some are 7-1/2” barrel guns, cut for shoulder stock and having rear leaf sights, some are 8” barrel guns without any military markings and some have the “US” marking on the frame.

I have reports of three additional revolvers but haven’t seen them so I can’t substantiate their authenticity.

they were all manufactured in Hartford, Connecticut in 1858-- the last production year for the Dragoon series. Besides the Dragoons, there is a single Colt Model 1851 (#94981) Navy known with the “C. L. Dragoon” marking on the le barrel at. Interestingly, it was that gun that initiated my research into the meaning of the “C. L. Dragoon” marking and was instrumental in solving the mystery. Until 1989 the collecting fraternity generally believed that the marking represented “Connecticut Light Dragoons”.

The Model 1851 Navy was advertised in a Norm Flayderman catalog. In addition to the “C. L. Dragoon marking, the name “S. McIver” was scratched into the brass back strap. Research led to identifying McIver as a member of the Alabama Confederate Cavalry Company. From there the true story unraveled.

As we know, on April 12, 1861, the ring by Confederates on Union Fort Sumter in Charleston Harbor socially started the Civil War. The Union quickly decided that an effective way to stop foreign intervention and aid to the Confederacy was to blockade all shipping to Southern ports.. is also cut o exports of cotton and other goods to Europe and severely curtailed reciprocal trade in dry goods and wartime material.

One of the Union’s first actions was to take control of Ship Island off the coast of Mississippi. Alabama, and especially the port city of Mobile, feared that the next move would be the North’s invasion of the Gulf States. e governor of Alabama, A. B. Moore, received an appeal from Mobile’s Confederate Commander, General J. M. Withers for more troops to protect the coast. Several wealthy Alabamans lowered their resources to man and equip a resistance force. Robert W. Smith, a retired commission merchant and veteran of the Seminole Wars and Mexican War offered a company. His oer was immediately accepted, but the men arrived in Mobile with horses but no suitable arms. Governor Moore had previously confiscated nearly all weapons in the state to arm earlier conscripts so Smith had to turn to the blockade runners. Another wealthy Dallas County, Alabama patriot, John J. Crocheron, came forward with the funds to equip the mounted company. e revolvers were purchased in January 1862 and each was hand 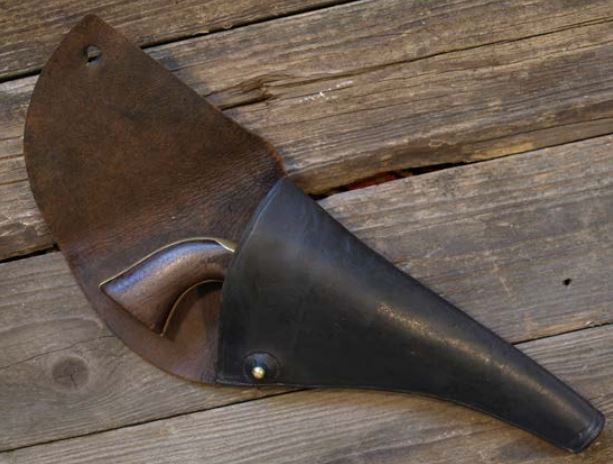 engraved “C.L.DRAGOONS” (Crocheron Light Dragoons) on the le barrel at. While Colt Archives have no formal record of the shipping of those guns, it is supposed that they went to a New York agent where they were purchased by a Southern agent or protester who ran them to Mobile. There is no record of what Crocheron paid for the guns but, as semi-obsolete weapons, they are not what the Confederate military might have preferred , but were accepted with thanks.

e Crocheron Light Dragoons endured a short two months of routine scouting patrols around Mobile Bay. Smith grew restless with guard duty and arranged to be attached to General Bragg’s command that was headed for the front. In early April 1862, the Crocheron Light Dragoons were in Corinth, Mississippi and fought in the battle Shiloh. Bragg cited the unit for personal gallantry and intelligent execution of orders, frequently under the heaviest re”. 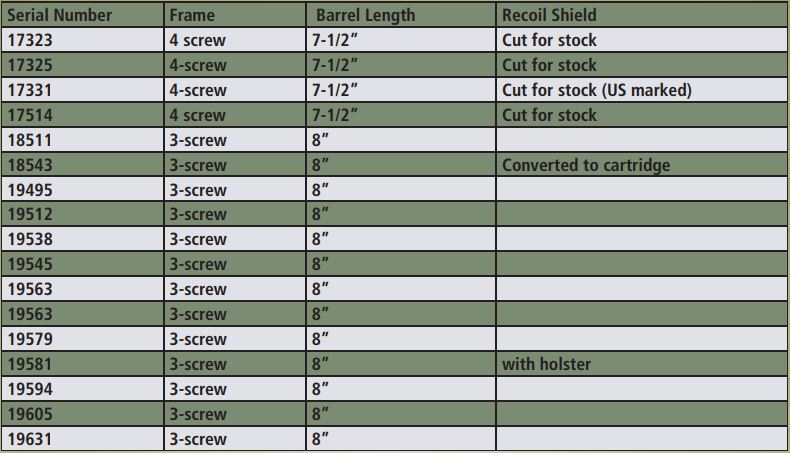 *Matching shoulder stock accompanies #17136- stock is numbered 17136/17137 e only known “C.L.Dragoon” marked Colt Model 1851 Navy is a three-screw frame gun, serial number 94981 e “C.L.Dragoon” marking is in italic script with upper and lower case letters. anks to the following for their help in this research: Bobby Vance, Herb Glass, Jr., Derek Povah, Dr. Will Noyes, Damon Mills, John Blickham, Bob Owens, John Gangel and the late Frank Singer. Serial Number 19561 along with the only known holster is in my collection.