There are not too many airgunners out there who will ‘fess up to a lucky shot. Usually such a shot will be explained away through some tall, trash-talking tale referencing years of experience, amazing intuition, and copious amounts of higher intelligence. Not that I think this is some modern phenomenon.

I’m fairly convinced such nonsense has been encountered around airgunners for quite some time. No doubt German airgunners from a century ago were bragging in just such a manner as they sat around enjoying their lager and spending  their evenings and wages gambling with this tavern airgun shooting game. And shooting skill had nothing to do with it. 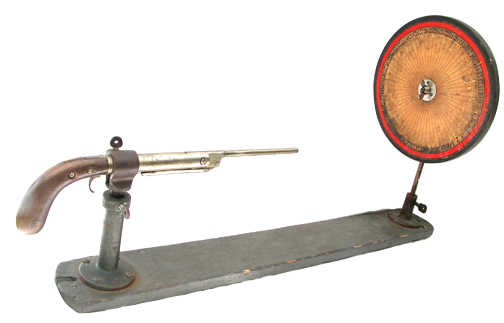 Figure 1: This Tell roulette game made by Oscar Will of Germany, was an early, novel use of air pistol for gaming purposes. The sightless Tell I was mounted to a fixed post, which served to keep most darts into their intended target.

The basic apparatus as seen here consists of a large, break-barrel air pistol affixed to a stationary post while sighted towards a rotating target face. This target face is marked with a series of  pie-shaped sections which are numbered in a similar fashion to a dart board. Indeed, this target is a dart board, as it receives the air gun dart projectile fired from the air pistol. I have heard several explanations about the games played on these dart roulette wheels.

One has the participant paying the house for each shot taken, in the hope of winning a prize of some sort, most likely involving an adult beverage. This would be very similar to a carnival type scenario. The second game would involve the participants betting against one another in some fashion, perhaps like throwing darts. My understanding is that these shooting games were purchased both by carnival type operations as well as tavern owners who sought to increase the number of patrons and revenues by offering the novelty of the shooting game to their customers.

In our present day litigious world, it is almost inconceivable to imagine having customers shooting “live” rounds in a local bar, even if it was only from an air powered pistol. 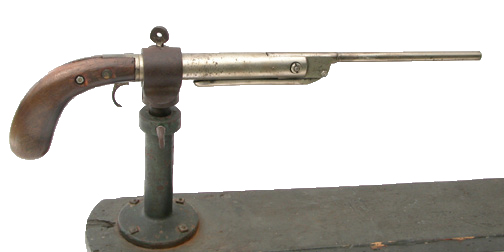 Figure 2-The pistol was mounted in a collar which allowed the gun to be cocked without removing it from its post. The roulette version of the Tell I had no trigger guard, nor was the grip ever drilled for one.  Another distinguishing feature of the roulette gaming version of the Tell I is that it had no sights, nor  was the barrel ever cut for sights.

The removeable target face is mounted to a spindle, which is attached to a fixed post. It freely spins as the operator sets it into motion. The pistol is mounted upon its own post which has only slight, limited lateral movement...not enough to threaten the obnoxious bully beside you at the bar. The pistol post also has an adjustment for vertical movement, which the proprietor can use to position the pistol to fire at a fresh area of the target as needed.

This target face can be reversed to give more use from the target on the back side. The whole unit is only 40 inches long, so we’re not talking about long range shooting here. The huge air pistol deserves special mention because it is quite unique in its own right. It is a  specially designed Tell I from Oscar Will of Zella St. Blasii, Germany. Will’s factory, founded in 1844,  was called Venuswaffenwerke, and was one of the premier airgun makers of Germany for almost a century. I have never encountered any early pneumatic airguns made by Will, but he was quite prolific as a maker of spring piston gallery airguns. His early airguns include crank cocking rifles and pistols, with either attached or detachable cranks/levers. Later, he made trigger-guard cocking rifles, commonly known as Bugelspanners, literally by the thousands and these are the most widely encountered antique gallery airguns today.

Surprisingly, the Bugelspanner was still being offered to the shooting public in the 1930’s on a limited basis. But by the turn of the century, Will was producing a large number of more conventional spring piston airguns. The Tell tradename as used by Will began appearing on his airguns around 1905. The Tell I pistol as outfitted for  this shooting game is a little different than the normal Tell I, which is itself a scarce collectible. One can see from the photos that the gaming Tell I has no sights, nor was the barrel ever machined for the front and rear sights (though this feature is present in Tell I models destined for regular carnival use).

The gaming Tell I also has no trigger guard, as it would not have been necessary to help steady the post-mounted pistol. The unwieldy long weight of the standard Tell created the need for a trigger guard which would have been used to help steady the piece. In the old movie “The Thin Man”, we see the hero trying to manage the size of his Tell I by steadying it across his leg. Another feature difference is that the gaming Tell I has a round barrel with full nickel finish, whereas the standard Tell I has an octagonal to round barrel that is blued in contrast to the nickel receiver.

This gaming pistol is stamped with the serial number 72. Although it is unmarked as to its maker,  it is unmistakably a Will Tell I. In fact, the standard model shown in the photos for comparison is also unmarked. A few Tell I’s are marked “Tellow” on the top barrel flat ( Tell O.W.), but I have never encountered a specimen marked “Tell I”.The tavern Tell  seen here is a huge pistol by anyone’s standards. It is a full 21 ½ inches in overall length. The smoothbore barrel is .21” caliber and is 10 inches in length. Of course, darts were the proper diet for this beast. 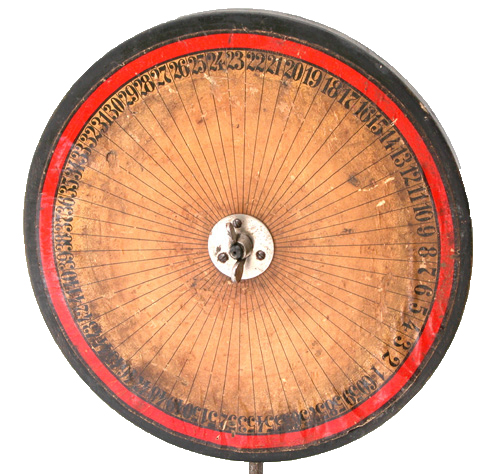 Figure 3: The rotating target is constructed of wood and is overlaid with a paper face printed with the scoring sections.  The target face may be quickly replaced from the game with the removal of the wing nut from the front of the spindle.

The wooden grip appears to be oak, but much of the German Black Forest walnut is very light in color without much grain, so perhaps that is the type of wood used. The bottom of the receiver is threaded to accept a triggerguard screw as seen on the standard Tell I. This indicates both variations came from the same production processes, at least to a point.

The post that holds the pistol features a collar that holds the receiver of the pistol firmly. A recessed area in the bottom of this collar is relieved with a channel that provides clearance for the cocking arm as it comes back during the cocking sequence. A long, flat wire spring provides the energy to push the leather-headed piston forwards during the firing cycle.

I believe this type of shooting game fitted with an air pistol was made from the early 1900’s through the 1920’s in very limited numbers. In a 1911 German ALFA arms catalog, we find a very similar unit offered for sale, though the air pistol appears to be a different unknown air pistol called the “Hasard”. But the same general features of the pistol, target, and overall design principles of operation are nearly identical. In a 1927 Gustav Genschow catalog from Berlin, advertising under the familiar GECO tradename, we see the Tell I version that is seen on these pages.

GECO even offered what looks like a blowgun version of the rotating target game. In actuality, it may be a spring-loaded air tube that is cocked and released manually. This second explanation is definitely more palatable in my opinion, as the thought of swapping spit with a burly beer drinking gent next to me at a tavern  would not be my idea of fun.

The wooden base and support posts on this game are painted a dull green color. Most of the mountings associated with this unit are cast iron. The 12 inch target face is made of wood, and covered on both sides with a colorful paper label that shows the scoring. When one side of the target face is hopelessly mangled from all the dart punctures, the target can be quickly flipped to the other side. This specimen in fact came with an extra, well shot up target face that looks like it tangled with a psychotic beaver on a carousel. Fortunately, the original concessionaire that operated this specimen couldn’t bear to throw anything out, which gives us present day collectors a little better insight as to how this shooting game was well used and enjoyed by shooters of yesteryear. 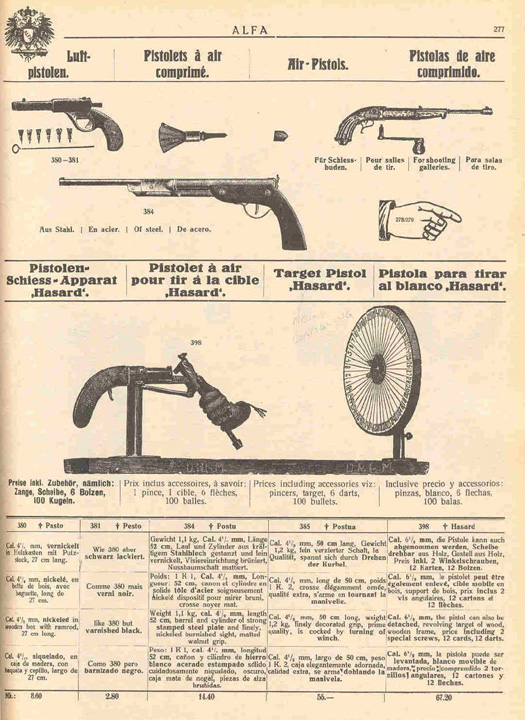 Figure 4 -A page from a German 1911 ALFA catalog shows a simliar “Hasard” air pistol in a roulette shooting game.

There do not seem to be too many of these sets floating around among collectors, though I’m sure more exist in German airgun collections. Its rarity is without dispute, but value is anybody’s guess. My friend Wes Powers discovered this nice specimen some years back, and he was adamant about demanding at least an above average Red Ryder in trade for it. Though the trade seemed a little one sided to me, I really wanted it and decided to go ahead and bite the bullet and do the trade. After all, I figured that sooner or later, I could find another Red Ryder.