AMMUNITION OF THE REVOLUTIONARY WAR

AMMUNITION OF THE REVOLUTIONARY WAR

The chronic problem facing the Colonies throughout the American Revolution was a shortage of ammunition. Each of the thirteen colonies competed for munitions, both for their own needs and to help supply the Continental Army. Attempts to amass and stockpile arms, powder and lead were stifled by the redcoats continually raiding and attempting to confiscate those caches. Indeed, it was one of those raids that touched off the War itself.

Citizens were encouraged to attempt to manufacture gunpowder, mostly unsuccessfully, as noted in an article in the Virginia Gazette dated December 1775.

“as many people have attempted to make Gunpowder, and some may have failed for want of knowing the proper proportions of the several ingredients, I have sent you that which, from a great number of experiments has been found to be best and is copied from the New Chymical Dictionary, translated from the French.....”

A basic formula follows, but although the proportions are correct, the mere combination of ingredients does not produce a usable granular gunpowder. Here is a method that gives the reader an idea of what aspiring powder makers of the day were up against.

“To make powder by hand, take 14 ounces of saltpeter, 3 ounces of sulphur and 4 ounces of well burnt charcoal (pine is best). Powder each separately, very fine, and mix them together in a mortar after moistening for 12 hours. To grain it, have a sifter with a sheepskin bottom, burnt full of holes with a fork, the size you will have the grain. Make the paste into balls the size of walnuts and put them in the sifter with a wooden ball of about a half-pound in weight, which being mover to and fro will force the powder through to holes and form the grain. Dry it well on a linen cloth or clean plank” 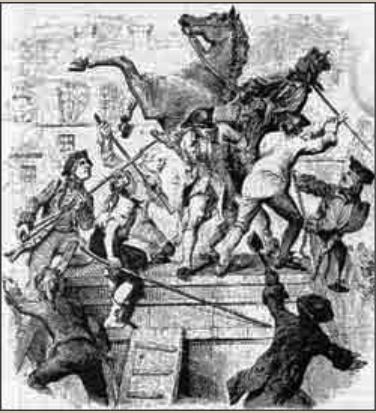 Figure 1 - A solid lead statue of King George III, erected in New York City, was pulled down by patriots and promptly converted into musket balls.

Colonies were encouraged to develop lead mines but efforts usually failed-- the few attempts generally met with little success. So desperate was the situation that the Connecticut Assembly appointed a committee to strip lead from clock weights and leaded windows. In New York, to celebrate the Declaration of Independence, an equestrian statue of George III, made entirely of lead, was famously pulled down 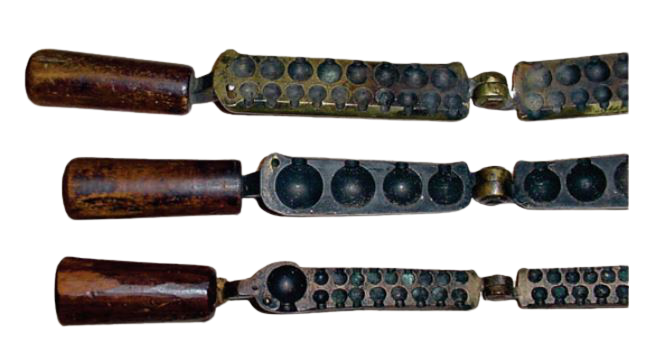 Figure 2 - One of the commercial bullet mold makers was Josiah Miller. These are several of his standard offerings. Note that the wooden grips on two of the molds are the originals. 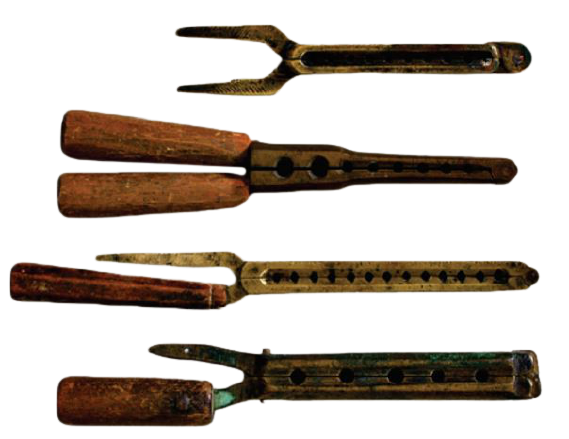 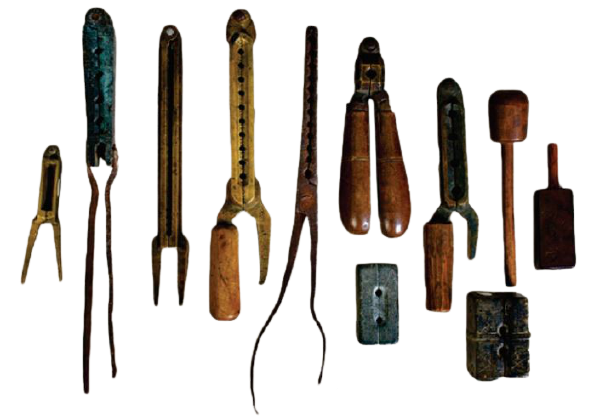 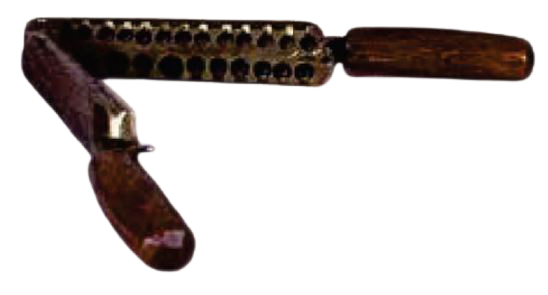 Figure 9 - When real molds were not available, soapstone could be carved into a crude mold.

Figure 10- This shot mold is very interesting. Note that the handle form closely resembles a modern set of pliers.

and converted into musket balls. “to assimilate with the brain of our infatuated adversaries, who to gain a peppercorn, have lost an empire” Someone said.

The colonies turned to Virginia where the only productive lead mines were operating. Virginia tried to ratchet up production but there were competing demands from the frontier where an Indian war was raging. The Virginia mines remained under private control until October 1776 when they were taken over by the State. Priority was then given to the Continental Army. As with gunpowder, competition for lead between the thirteen colonies and Washington’s army existed throughout the war.

In the end it was tobacco that saved the day. Europe’s insatiable appetite for tobacco resulted in steady supply of gunpowder and lead. In spite of this supply, stores were always low and reports of inadequacies abounded throughout the balance of the war.

In Colonial America a gun, be it a musket, a rifle or a pistol, was a necessity. It provided both a means of self-protection and, in rural areas, a tool for filling the family larder. In order to provide the bullets and shot for these weapons it was necessary that the householder have the means to cast the projectiles.

The molds for the balls and shot took a variety of forms-- from the primitive home-made soapstone types to commercially produced brass or iron molds. It was common for a single mold to cast both a solid ball and a variety of shots. Different loadings for different purposes, yet all usable in the same smoothbore musket.

The Brown Bess, the standard weapon of most Colonial homes, had a 70 caliber (+/-) bore. For most military purposes it fired a single ball although buckshot loadings were not uncommon. In general , the British were supplied with ready-made cartridges consisting of measured charges of powder and ball wrapped in paper or newsprint. Colonials were more likely to use loose powder and ball or buckshot.

The molds used for home production were many and varied. Some typical examples are shown in Figures 2 through 11.

A complete and detailed story entitled “Ammunition Supply in Revolutionary Virginia” (In three parts) is available on-line at the “THE BLACKPOWDER JOURNAL” website, Issues: Volume 2, Nos. 2, 3 and 4.