A Primer on Ancient Arms and Armor

Collectors of antique militaria prize objects for a variety of reasons. Considerable appeal lies in the appreciation of precision craftsmanship. Another factor is the historical significance of a piece. These qualities determine the desirability of an antique weapon. The value of a piece is driven by rarity and the degree of preservation. This holds true whether an object is one hundred or one thousand years old. Collectors often widen their horizons over time to include pieces from a broader range of periods and cultures. Acquiring older pieces adds depth to a collection as one comes to appreciate the long trajectory of technological innovation that has led to the present. With that in mind, let us consider the furthest reaches of militaria collecting – the arms and armor of the ancients – specifically the Greeks and Romans.

Warfare is as old as humanity. Weapons were among the first tools created by modern humans, and their material remains are found among the earliest finds in the archaeological record of mankind. Throughout all human history, conflict has given rise to invention. The antecedents of all modern militaries and weapons systems are to be found in the Classical civilizations of the ancient Mediterranean. The Greeks are rightly credited for their important contributions in the areas of science, literature, philosophy, and political thought. They advanced the arts in a way that no culture had done before them, producing realistic statuary in marble and bronze. Greek architectural principles are still in use today. The far-flung trade networks of the Greeks were facilitated by their mastery of shipbuilding and navigation. Coinage as currency came into being first in ancient Greece. The very idea of understanding the universe free of strict adherence to religious dogma was central to ancient Greek thought. All these notions have formed the identity of modern mankind. However, the Greeks also transmitted a less celebrated legacy to the modern world. Greek militarism changed the world. In order for the ancient Greeks to have had the freedom to invent democracy, build the Parthenon, and carve the Venus de Milo, they had to be secure from outside domination. This was achieved by military supremacy. Greek freedom of thought and technological know-how were applied from the earliest period to the necessity of defense. The threat was not just external. Greek city-states were in an almost constant state of conflict with one another. This continuous state of war drove military technology far ahead of anything that had been achieved earlier under the great civilizations of Mesopotamia and Egypt.

By the 6th century BC, Greek military technology far exceeded anything else that existed in the world at that time. Iron offensive weapons like swords and spears were produced to the highest standards in countless workshops. The ancient Greek armor industry was A Primer on Ancient Arms and Armor By Randall Hixenbaugh especially advanced. Copper extracted from mines in Cyprus was combined with tin from mines in Iberia to produce high quality bronze that was then cast and hammered to form helmets and breastplates. Whereas metal armor was reserved for only the highest ranking members of society in other ancient civilizations, it was accessible to an entire middle class of Greeks. These men formed the militia hoplite class at the core of Greek society. They were free, land owning, literate, politically represented individuals. They armed themselves in technologically advanced gear with their own means to protect their own way of life. Their successes over existential outside threats like the Persians and Carthaginians reaffirmed the notion of Greek exceptionalism. With Alexander the Great, this Hellenic worldview was spread through the Middle East as far as India. With the rise of Rome, the achievements of the Greeks were spread further into Europe. The Romans adopted Greek strategy, tactics, and military technology. They also were quick to take on technology from the adversaries that they encountered as they subdued Europe and North Africa. The Romans copied the warships of the vanquished Carthaginians, they adapted the Iberian short sword to become the Roman gladius, and they copied the bridles and stirrups of the Gallic cavalry. They combined all of this into the Roman legionary system, which proved to be a fighting force unrivaled in the ancient world for hundreds of years. The Romans excelled at administration and communication, establishing a network of roads and forts as far north as Scotland. These accumulated military achievements were transmitted first from the Greeks to the Romans and ultimately to the modern countries of Europe and the United States.

The Greeks and Romans both produced a great deal of military gear. Ancient weapons and armor are often overlooked by militaria collectors who might suspect that they are excessively rare and expensive. It is also assumed that all ancient artifacts are housed in museums and are not available to private collectors. However ancient weapons and armor can be found in all price ranges, and a great deal of pieces owned by private collectors are available in the marketplace. The most accessible objects are those that were made in great quantities in antiquity – arrowheads and sling bullets. Finely made ancient Greek arrowheads are quite common and can be obtained for as little as $50. Likewise cast lead sling bullets, often bearing inscribed designs or even insults, have been found at many ancient battlefields and can be purchased for $100 or so. Larger weapons are readily available as well. Ancient bronze spearheads range from a few hundred to a few thousand dollars depending on quality and size. Iron weapons are a bit harder to come by as iron is much more prone to corrosion and loss than bronze. As such many ancient iron swords have simply rusted away to nothing in the ground. Nonetheless, in certain circumstances they are preserved. Ancient Greek, Persian, Macedonian, Celtic, and Roman edged weapons can be found with some frequency in the antiquities market. The Roman sword and dagger, the gladius and pugio, are especially sought after by collectors. The blades sell for several thousands of dollars. Examples that retain their bone or ivory hilts sell for tens of thousands. Other offensive weapons that one can find include, catapult balls, darts, javelins, axes, maces, and even early hand grenades that exploded with so-called Greek Fire.

Ancient armor is perhaps the most interesting collecting field. The Greek helmet is iconic as a symbol of martial prowess. The first helmet was surely conceived soon after the first human was struck in the head by an adversary. More so than any other piece of armor, the helmet increased both the combat effectiveness of the soldier and his likelihood of survival in battle. The helmet allowed the combatant to sustain a blow and remain conscious, enabling him to fight back or run and fight another day. The helmet remained essential military gear from the Bronze Age through the advent of iron, and continues to remain in use long after the introduction of firearms. Of all of the great variety of weapons and armor that have been introduced over the millennia, the helmet is virtually the only one that remains as ubiquitous on the modern battlefield as it was in antiquity. The helmet came to represent the hoplite class – the central pillar of Greek society. Ancient Greek helmets were made in a variety of basic forms. The closed form Corinthian helmet is the most readily recognizable type. It is also the most sought after. The later and more open form was the Chalcidian type. It varies from elegant heavily decorated forms to more rudimentary types. The Illyrian type had a completely open face and was produced on a large scale. The exceedingly rare Attic type helmet was the only Greek helmet produced in iron rather than bronze. The Pilos type was a simple conical form. The Boeotian type was designed for horsemen and had a broad visor. Factors that contribute to the value of an ancient Greek helmet are rarity, quality and condition. A finely made Corinthian helmet in perfect condition can 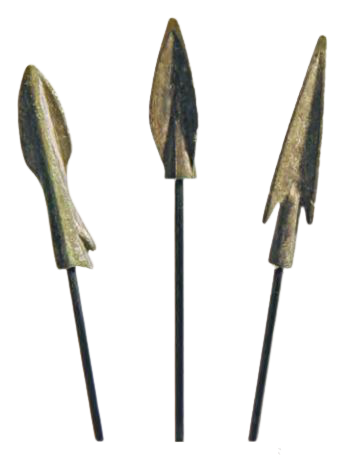 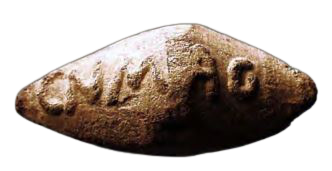 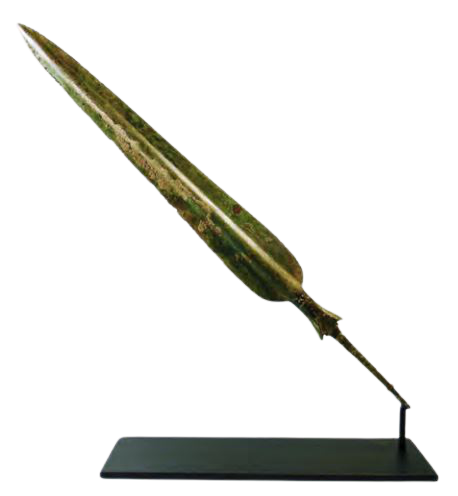 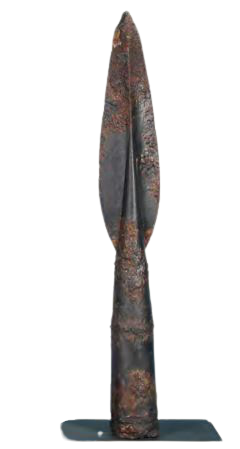 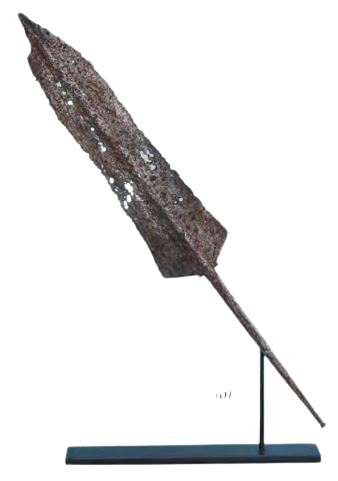 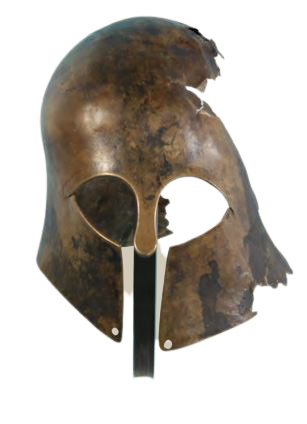 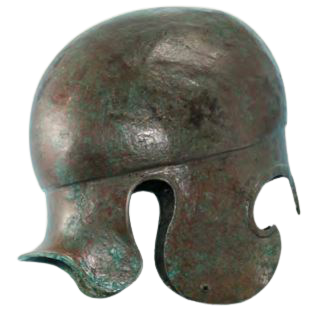 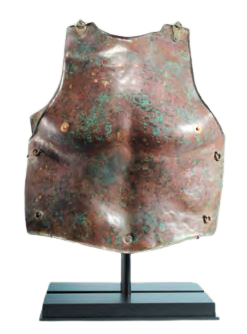 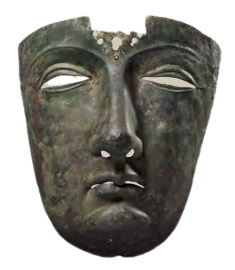 sell for hundreds of thousands of dollars. Other high quality ancient Greek helmets can be had for $20,000 to $75,000. An Illyrian helmet from a provincial workshop that is compromised by corrosion and repaired, may sell for less than $10,000. Interesting fragments of ancient helmets can be obtained for much less.

Greek body armor comes primarily in the form of bronze breast and back plates. These are quite rare but they do come on the market from time to time. Depending on period, size and condition they can range from several thousand dollars for fragmentary examples to hundreds of thousands for beautiful specimens in choice condition. The finest Greek breastplates were artistically designed to mimic the bare muscled chest of the hoplite. Other pieces of Greek military gear include ankle guards or greaves, quivers, and scabbards. These all appear with some frequency. Shields are much more rare, with most of the few surviving examples now housed in museum collections. Roman body armor is more common. Pieces of Roman iron plate armor, lorica segmentata, and chain mail, lorica hamata, are found with some frequency. Large pieces of ancient Roman armor are harder to find. The Romans generally did not inter soldiers in armor, as the gear was often owned by the state rather than by the individual. So Roman burials are much less likely to yield weapons and armor than Greek tombs. Furthermore Roman helmets and armor were, more often than not, constructed of iron which is much less likely to survive in the ground for centuries as is bronze. For these reasons, intact Roman helmets are very difficult to find and generally command high prices. Whereas an early Roman Republican bronze helmet might sell at auction for $25,000, a well preserved Roman Imperial iron legionary helmet might sell for ten times that amount. The most prized Roman helmets are the cavalry parade helmets. These were extremely elaborate helmets that featured a realistic bronze mask that covered the face, with openings for the eyes, nose, and mouth. They must have been very intimidating to adversaries on the ancient battlefield. An extraordinary Imperial Roman cavalry helmet was found by a metal detectorist at the site Crosby Garrett in England in 2010, it subsequently sold at auction for over $3.5 million.

Collecting ancient arms and armor is a field that any military enthusiast must consider. There are thought provoking entry level objects that one can acquire for a few hundred dollars. At the price level of several thousand dollars, one might acquire more substantial Greek, Roman, Persian or Celtic weapons including swords, and spear blades. The next step up is ancient armor. Surprisingly one can own an intact ancient Greek or Roman helmet that was worn on an ancient battlefield over two thousand years ago for the relatively modest price of ten to fifty thousand dollars. The more serious collector can find unique and important pieces for over $100,000. At all price levels, collecting ancient arms and armor is a safe investment. If one deals with a reputable dealer or auction house, they can be assured of the authenticity of their purchases. The amount of material on the market is finite and prices have risen steadily for decades without any dips in the market. Apart from the investment side, one who collects ancient art becomes an important custodian of these thought provoking antiquities. They become a link in the chain that preserves the past for the future.

Randall Hixenbaugh is an appraiser of ancient art and is one of the world’s leading dealers of antiquities. He specializes in ancient arms and armor and has placed many important objects with private collectors and museums in the US and Europe. His book, Ancient Greek Helmets, a complete guide and catalog, will be published this fall.