The period from the mid 1830’s to the mid 1860’s was probably the most significant period in arms development since the invention of gunpowder. That thirty-odd year stretch saw the rapid leap from the flintlock system to the cartridge era.

Within that time span inventive genius ran rampart. The V.D. Stockbridge book, A DIGEST OF U.S. PATENTS RELATING TO BREECHLOADING AND MAGAZINE SMALL ARMS1 shows that literally hundreds of inventors developed mechanical systems to accomplish their own visions of how that progress should be made and how they might profit from the opportunities presented. The vast majority of those inspirations died on the vine-- some because they were impractical, others because they were poorly marketed. Very few systems persevered to extend in popularity beyond those development years.

One small niche in arms history was the apparent obsession by the Ordnance Department with developing automatic priming systems that could be applied to a variety of both muzzle loading and breech loading arms. This preoccupation is especially puzzling for two reasons-- firstly, the traditional reluctance of the military to try anything new and secondly when one considers the benefit of the application to muzzle loading guns. The priming of a muzzle loading pistol, musket or rifle was the least of the loading process yet by the early 1850’s significant attention was focused on automatic priming devices adapted to muzzle loaders. The adoption of the Maynard tape priming system added significantly to the cost of the gun and required another type of primer to be inventoried and distributed. Other inventors followed suit and before the fad had passed, Sharps carbines and rifles using the Lawrence pellet primer and Perry tubular primer mechanism had been purchased and an automatic priming system of some type was a virtual requirement for consideration by the Federal Government.. The good news was that alternatively, guns so equipped could also still use conventional primers.

If automatic priming systems made little sense for muzzleloaders, their use on breech loaders was a significant factor in increasing the rate of fire. 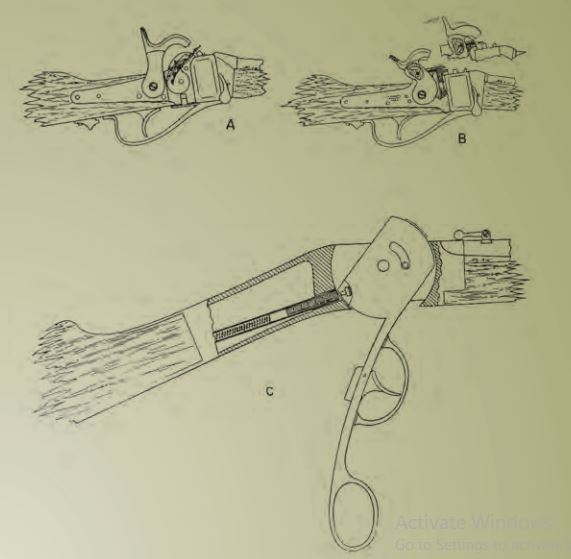 So here’s the puzzle- Well after the fascination with automatic priming systems for muzzleloaders had faded, why were so many inventors still working on complex and impractical applications to percussion muzzle loaders? In this article we’ll look at the many ideas developed by various inventors who all utilized surplus Model 1836 and Model 1842 single shot martial pistols as their design platform. Note especially the dates of those systems that were actually patented - the late 1850’s and note also that almost all would require yet another proprietary primer type.

It was probably the Ordnance Department’s fascination with Edward Maynard’s tape primer system that encouraged inventors to exercise their own ingenuity in the direction of automatic priming. Starting with the Nippes musket conversion to the Maynard system modifications as applied to Model 1840 Muskets, the Ordnance Department began insisting on the application of the Maynard tape primer system to all new arms, up to and including the Model 1855 Springfield pistol carbine and Model 1855. 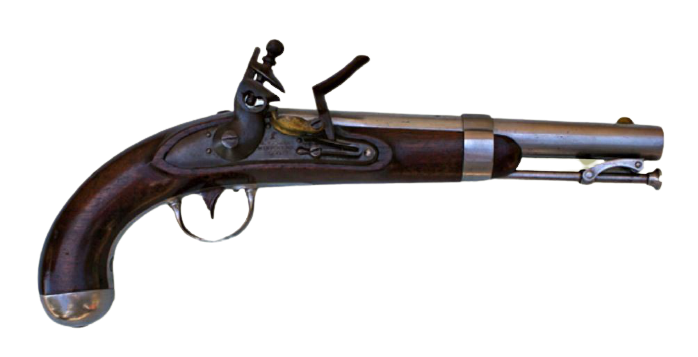 2. The Model 1836 Martial Pistol- obsolete and available in quantity for modification.

3. The Model 1842 Martial Pistol- obsolescent and a perfect plaything for ingenious modification.

4. An early version of the Maynard Tape Primer applied to a Model 1836 pistol 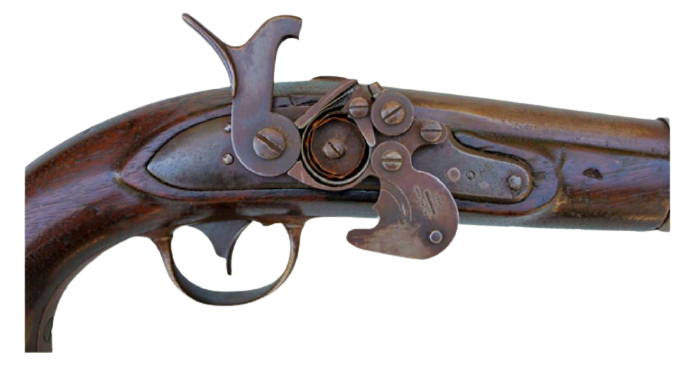 4a. A detailed view of the Maynard mechanism

5. The Gedney Patent (1859). A disc priming system with a tube of primers located inside the head of the hammer. 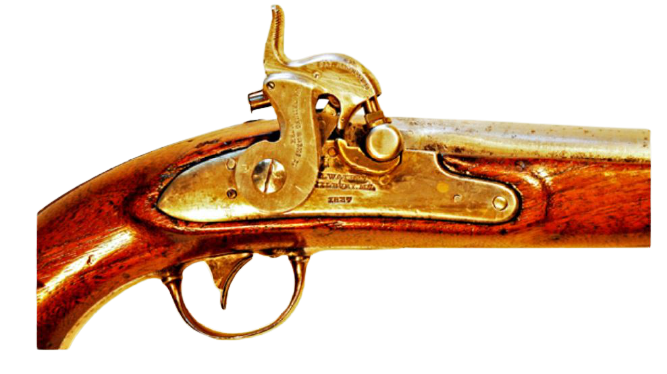 5a. A closeup of the Gedney System was mounted on a surplus Model 1836 pistol.

6. The Rupertus System (1859). A roll of tape primers located inside the head of the hammer. 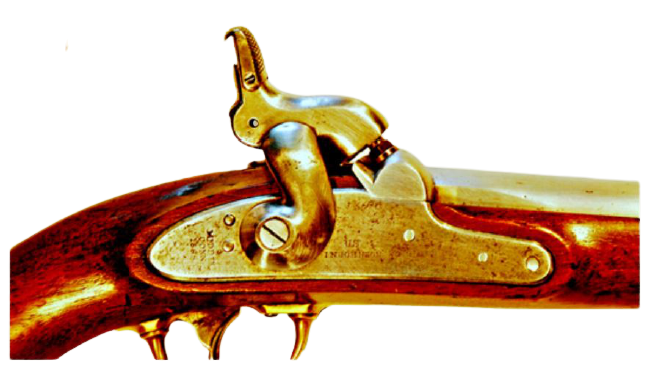 6a. Closeup of the Rupertus mechanism, note that the host gun is a Johnson Model 1842 pistol.

7. An unknown system with a tube of disc primers inside the hump between the hammer face and the nipple.

7a. The inside of the lock of the gun shown in Figure 7. Note the mechanism that lifts the primer into position. 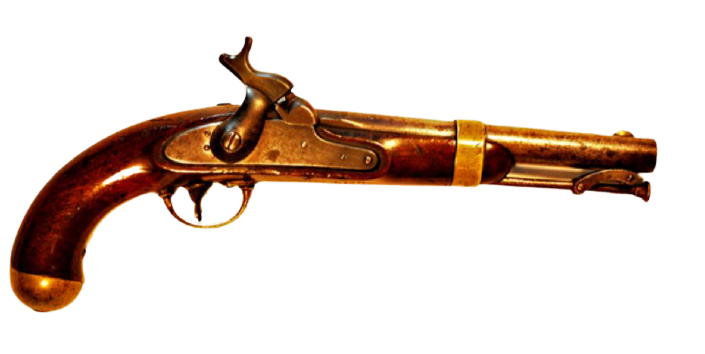 8. An unknown system with a disc primer device built into the hammer. Perhaps a version of the Rupertus System shown in Figure 6.

9. One of a trio of strange conversions. This Model 1842 pistol has a rotating drum which is primed with loose fulminate. See Figure 9a for details.

9a. The tube primer fits into a groove behind the hammer. After the hammer is cocked the shooter pushes the "nail head" with his thumb, forcing loose fulminate into a hole in the drum. As the hammer falls the drum rotates such that the hammer strikes the primer compound. Note that should the remaining fulminate in the primer explode, the entire primer tube would fly toward the shooter, possibly taking out an eye.

10. Another version of the gun shown in figure 9. 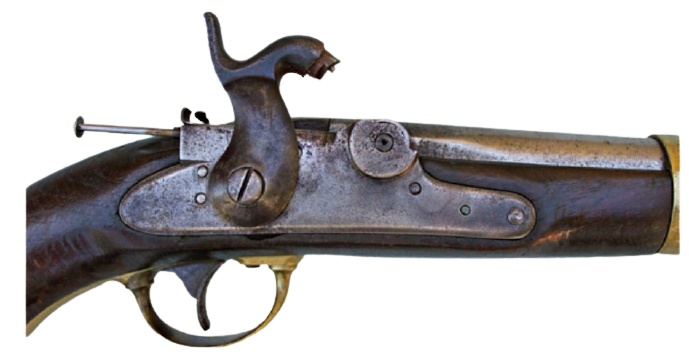 10a. The "nail head" feature can clearly be seen in this view 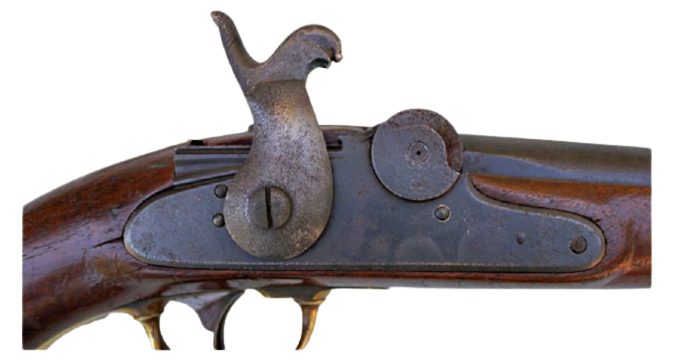 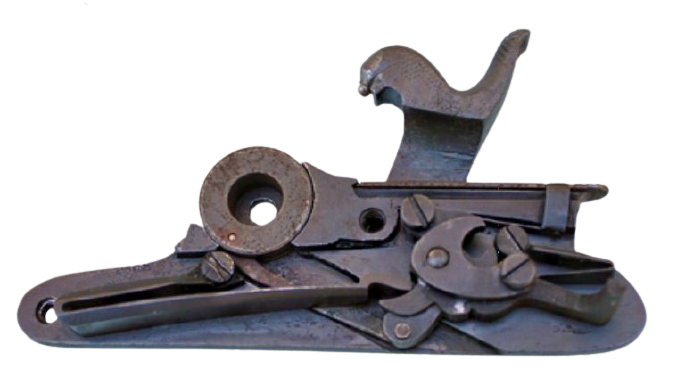 11b. The complex activating mechanism of the gun shown in Figure 11.

12. The Springfield Arsenal was also working on a self-primed martial pistol, probably much earlier than those shown above 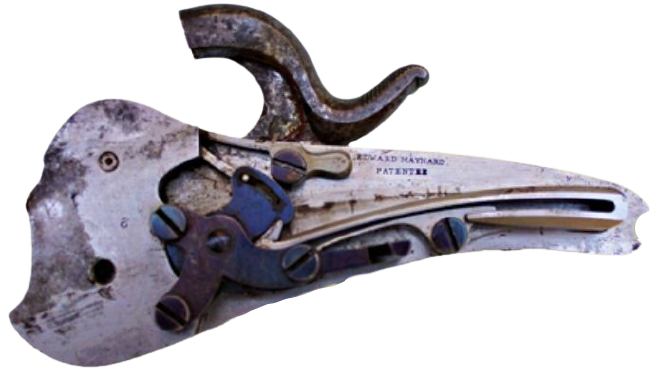 12a. The inside of the Springfield Arsenal lock. 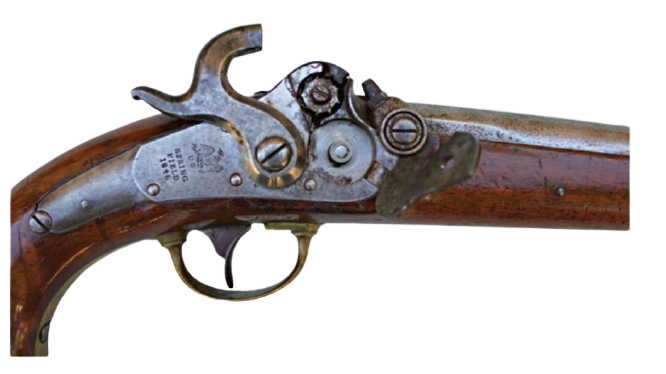 12b. A closeup of the Maynard System on the Springfield Arsenal pistol. 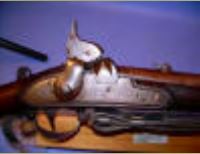 applied as far as we know

only to longarms used a

tape primer inside the 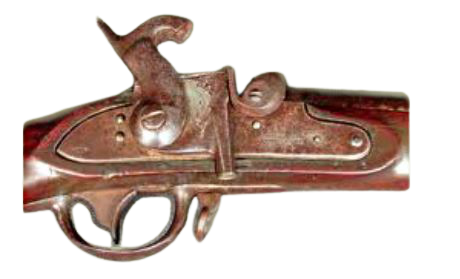 14. The Butterfield System used disc primers in a vertical magazine. It was applied to muskets, revolvers and a few derringers.

Rifled Muskets. When Ambrose Burnside submitted his first model Burnside carbine to the Ordnance Board, for example, it was initially rejected until he applied an “afterthought” version of the tape primer system. Burnside, however, had the last laugh since he made the tape feed slot too narrow for the then standard Maynard primers, necessitating the purchase of his own proprietary primers.

But in the meantime, ordnance warehouses were full of obsolete Model 1836 flintlock pistols and obsolete Model 1842 percussion pistols. These became a playground for inventors to develop their own, often bizarre, ideas for automatic priming systems. Many of the automatic priming systems we will discuss here were applied to those weapons. It is surprising that so little research has been done on these rare and interesting guns. What we have is little more than the few surviving specimens that are left to speak for themselves.

I had considered titling this article “Bad Ideas- Well Executed” since the ingenuity of design is apparent but the resultant execution was often somewhere between useless and dangerous.

One is tempted to conclude that tool room employees must have had a lot of time on their hands to play with weird and wonderful mechanical concepts. Many of the systems covered in this article are probably one of-a-kind experiments that went nowhere. A few, such as the Gedney and Rupertus Systems were produced by established firms and, at least in the minds of their creators, had market potential. The Gedney System seems somewhat unique in that the complicated hammers were mass produced by a contractor, the AMS PRIMING & ARMS Co. of New York. Although few finished guns were produced, complete hammer assemblies are frequently found with the tumbler hole unfinished.

We may never know or understand the thinking that went into these inventions- they took place at a time when strange and fascinating patents were being requested and granted in virtually every field imaginable. For the purpose of this article we’ll let the guns speak for themselves.

All of the unusual handguns shown in this article are from the collections of Rick Starbuck and Bob Sadler.

RELATING TO BREECHLOADING AND