BLADES OF THE WORLD

A Newly Discovered Will and Finck Dress Dagger

There are still treasures out there yet to be found, this was one of them but sadly for me, some other guy was the beneficiary of good luck.. This knife is the culmination of years of experience in the knife making industry by the San Francisco firm of Will & Finck. It was likely made in the 1880’s. There are very few American knives sporting gold embellishments. This one is clearly a dress knife with it’s gold plated brass mounts (cross guard, ferrule & pommel). As you can see, the finish is still intact and remnants of the gold remain on the mountings (figures 2 & 3), the cross guard still has a good amount of gold in the protected areas where it would have been seated against the sheath. To my knowledge Will & Finck only used walrus or marine ivory for their handles. It is said that some California cutlers used elephant ivory, yet to date, I have not seen one and it is basically illogical. So while it is possible that there could be a knife out there made by the California cutlers that incorporated elephant Ivory, it is more likely that most of their work was done with the materials at hand. I am speculating, but this is backed up and alluded to in the knife experts book ,“Knifemakers of old San Francisco” by Bernard Levine where he states that, “respectable San Franciscans …could select walrus ivory or abalone shell handled dirk(s)” (from a card in the windows of Will & Finck).

Mr. Levine also points out that California was so far from the rest of civilization that they had to essentially produce whatever they needed. To have elephant Ivory shipped to California when walrus and other marine ivory was so plentiful would have been cost prohibitive. They literally had the supplies they needed at their feet. Not to mention the fact that walrus and abalone were just as, if not more, beautiful.

Adding gold to an already beautifully made knife 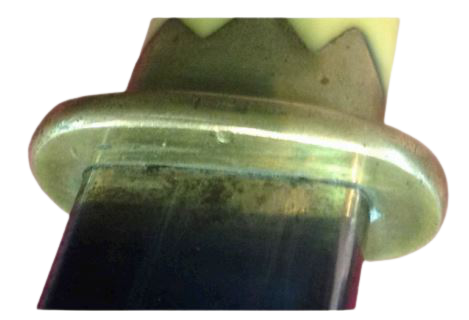 Figure 2: A closeup of the cross guard shows the reflection of gold in the minty mirror finished blade.

was the icing on the cake, the knife in these figures was the epitome of a dress knife. Every Gentleman should have one. It was likely made circa 1880. A few of the clues that lead us to date the knife are the circle in-a-circle design of the stamp, a heavier screw clasp and that it has a nickeled, heavier gauge sheath. All of these attributes point to a manufacturing date, cin the 1880’s. There are very few nickel sheathes and still fewer Bowies with gold trim.

So what is the history of this knife? Not much is known about it. We can ask many questions but in the end we will likely never know, and that allows us to speculate.

Was it carried by a gentleman of high order, who perhaps also carried a gold-plated, ivory handled Colt? What we have heard is that it is storied to have come from the San Diego, CA area, and was walked into a gun shop by a picker. So maybe it didn’t stray too far from its original point of origin in San Francisco. 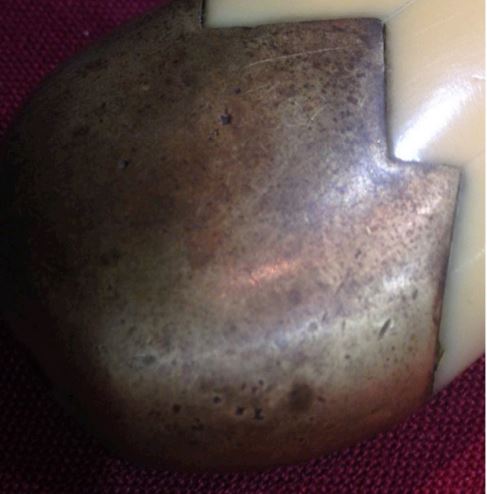 View figure 3 and you will see brass showing through the pommel. You can also clearly see traces of the gold that still remains. This is a Gentleman's Dress Bowie, in a beautiful form that is beyond the norm. It is a very pleasing design and feels great in the hand. A true one-of-a-kind masterpiece from the Masters- -Will and Finck. Notice the joint where the walrus ivory meets the brass and that the ivory has absorbed (discoloration of the ivory) minerals from the metal. This aging does not happen overnight. This is one small key to judging age when purchasing knives. It takes over 100 plus years to see this kind of patina.

Note in figure 4 the finish on the sheath is nickel. I have collaborated with a few experts on the subject of both Colts and Bowie Knives and we all agree that this sheath is nickel over tin. Also, that the gold was likely electro-plated onto the mounts of the knife. The mounts were most likely electro-plated prior to assembly which brings up another point. This knife has a serial number on top of the crossguard and on the lip of the sheath. It could also have a serial number on the tang under the pommel , however it would appear that it has never been apart, so to take it apart to check would likely damage the condition. Condition of any 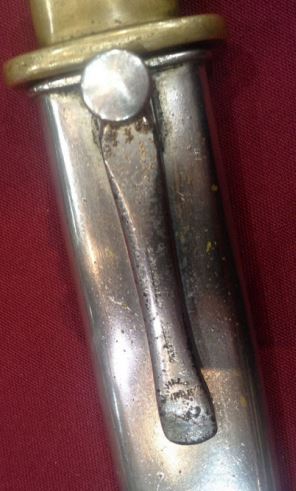 a knife shouldn’t be compromised just to see the inside and/or search for serial numbers.

Employing a system of applying serial numbers was not only done to help reassemble the knife, but it also begs the question… is there a Will & Finck inventory book out there somewhere that has a list of Bowies and their features? It would be quite a find to discover that “inventory book”. This knife is in minty condition with a mirror finish on the blade. There is another Bowie by Will & Finck known to exist with a similar serial number. That Bowie has 80 silver studs and also is a dress knife.

In doing further research, you can also view a few other San Francisco Dress Bowies in the book “California's Best” by Brian and Brad Witherell. See top of page 121 of that book to view a gold-tipped, studded sheath knife. See page 130 (middle of page) to view a Will & Finck knife with a gold or gold plated cross guard. It is surmised that the heavier clasp on the sheath was developed over time and is therefore a later feature. Also, note the circle-in-a-circle mark which would appear to be a later feature on Will & Finck knives. You can view one of the few Will & Finck knives with this feature on top of page 123 of the aforesaid book. That knife also sports a heavier clasp. 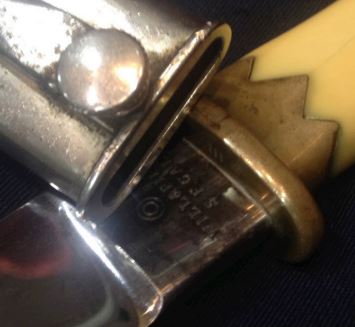 There are several Bowie Knives by San Francisco makers that sport precious metal embellishments such as gold and silver escutcheons, tips, cross guards etc. Brass was also used by Will & Finck. What I find most interesting about this knife is that it came into the collector world recently. I first saw this knife “fresh out of the wood-work” so to speak in the spring of 2014. I absolutely love (as most of us do) the chase and hunt to find that next collectible. I love the stories that they ultimately tell not only through their methods and materials of construction but that are also evidenced by the romance, aura and good vibes that each “emits”. Enjoy and keep looking, there is gold in them thar hills. There are still treasures out there.

Collaboration and discussions on finer points and attributes of California Knives.