This narrative will step through the history of the early phases of development of the Colt automatic pistol. The key points of development will highlight the important sequences of this evolutionary process.

The development of Colt Automatic Pistols would not have been possible without three men of history, Samuel Colt, John Moses Browning and William Crozier. Each of these men had the vision and the drive to pursue different but shared objectives.

While Sam Colt was not directly associated with the development of the automatic pistol the company he founded and the manufacturing policies he initiated were vital. Sam is remembered as the American inventor and industrialist that built the Colt’s Patent Firearms Manufacturing Company. Applying the newest manufacturing techniques and philosophies of the mid to late 19th century made mass production of the firearms commercially viable. 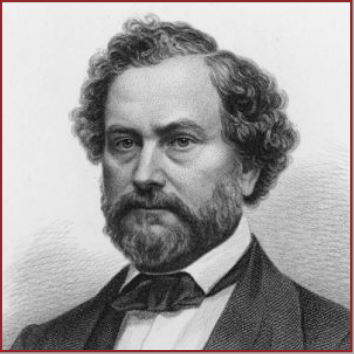 The company that Sam built had a positive and aggressive attitude toward product development and working directly with the customers. Colt Firearms had a strong well established relationship with the United States military 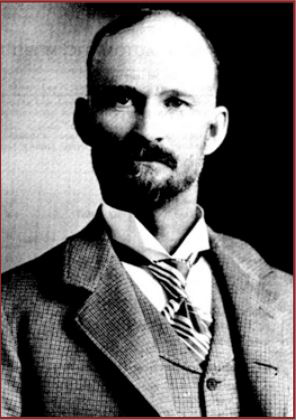 John was born in Ogden, Utah Territory in 1855. At the age of seven John started working in his father’s Ogden gun shop.

John Moses Browning is remembered worldwide for his creative ability to develop all types of firearms, both military and commercial. In addition to the wide variety of military and civilian firearms he designed many of the cartridges for those weapons.

John Browning worked for and designed firearms for Winchester, Colt, Remington, Savage, Stevens, and Fabrique Nationale de Herstal of Belgium. In later life he was associated with the founding of Browning Arms Company. 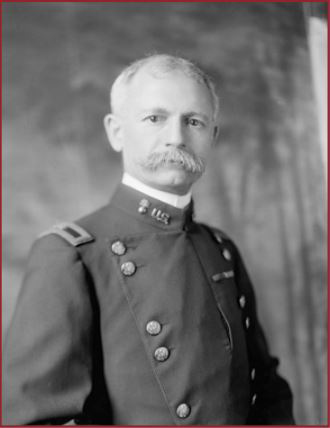 General William Crozier was a West Point graduate. He was also the Chief of Ordnance for the United States Army from 1901 until 1918. His service record includes the Indian War campaigns, the Spanish-American War and the PhilippineAmerican War. In these campaigns he had first hand experience with the weapons of the day.

His vision was the U.S. Army to be equipped with modern reliable weapons for the battle field.

In the Philippine-American War, also called the Philippine Insurrection, Gen. Crozier was very aware of the limited effectiveness of bullet size and stopping power. As Chief of Ordnance, Gen. Crozier instituted the Thompson-LaGarde Tests in 1904. The purpose of these tests was to compare the effectiveness of different bullet diameters and the relative stopping power. The Thompson-LaGarde Tests were referred to as the cadaver tests.

In the early 1890s John Browning designed an air-cooled, belt-fed, gas-operated machine gun. The gun was accepted and built by Colt. The Colt machine gun the M1895 was nicknamed the “potato digger.”

Browning introduced Colt to the semi-automatic pistol designs that he had developed. On July 24, 1896 John Browning agreed to license his designs to Colt for manufacture and sales in the United States, its territories, Great Britain and Ireland. This started the long productive relationship of Colt-Browning.

In April of 1897 John Browning was issued a patent for an automatic pistol. The following drawing illustrates the functional operation of the pistol patent. The illustration shows a swinging barrel design. Two swinging links connect the barrel to the frame, one at the muzzle and one at the chamber. The two swinging links keep the barrel parallel to the slide at all times. Cartridges are carried in a removable magazine inserted through the grip. The illustration depicts the top end of the magazine with an empty shell case being ejected by the reciprocated slide.

A Colt fabricated prototype of Browning’s 1897 patent was submitted to the U.S. Army Chief of Ordnance for tests in 1898. The 1898 comparison tests included Colt, Bergmann, Borchardt, Mannlicher and Mauser semi-automatic pistols.

Compared to other automatic pistols of the period the Browning 1897 pistol design is a very simple system. The system is easy to disassemble and to maintain. As a comparative example, the Borchardt design is a very awkward intricate mechanism and the Mannlicher was a blow forward system.

The principle of simplicity and ease of servicing the Browning 1897 pistol were carried into subsequent Browning-Colt pistol designs. 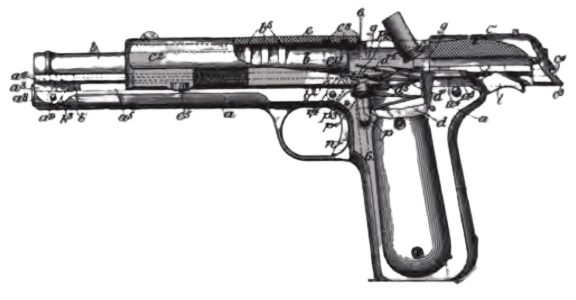 The following close up drawing illustrates the locking lugs on top of the two swinging link barrels. The barrel lugs lock into groves in the slide when advanced to full battery.

This first commercial Colt pistol of Browning’s design was the “Colt Automatic Pistol.” Collectors have labeled this the Model of 1900 Sight Safety. 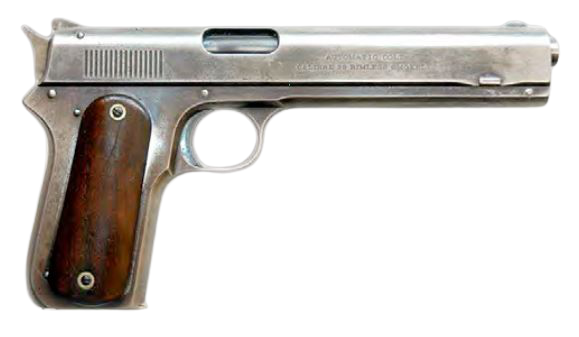 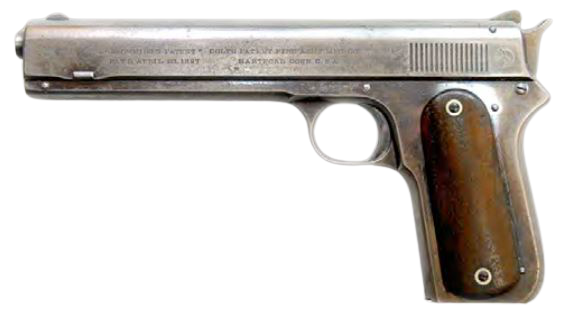 The standard U.S. Army handgun cartridge at the time was the .38 caliber revolver cartridge. Browning invented the .38 ACP (Rimless Auto) cartridge for smoother feeding in an automatic pistol. 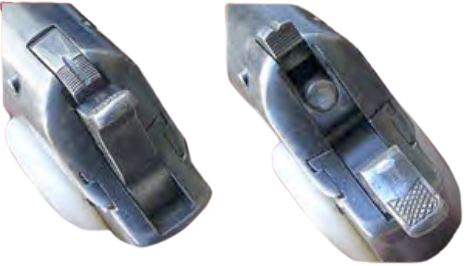 The sight safety feature had very short field usage. Many of the “Colt Automatic Pistol” sight safety pistols were modified during manufacturing or the guns were returned to Colt for modification. 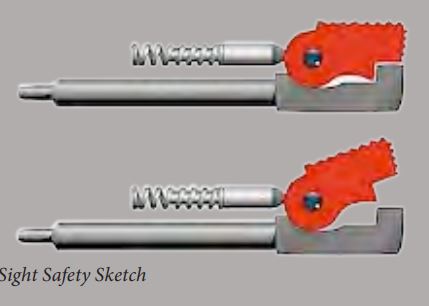 The original magazines issued with the “Colt Automatic Pistol” were nickel plated and marked PAT’D SEPT. 9 1884. The patent US-304712-A was issued to Louis I. Diss of Ilion, New York for new and useful improvements in Magazines for Firearms. 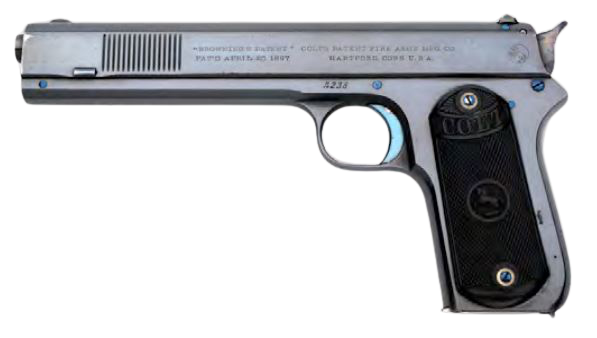 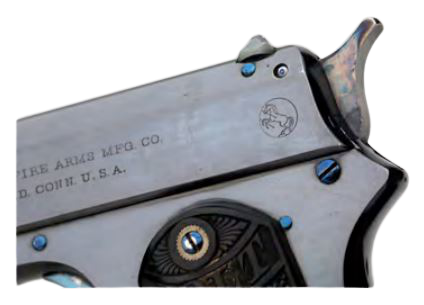 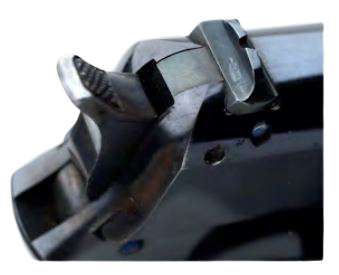 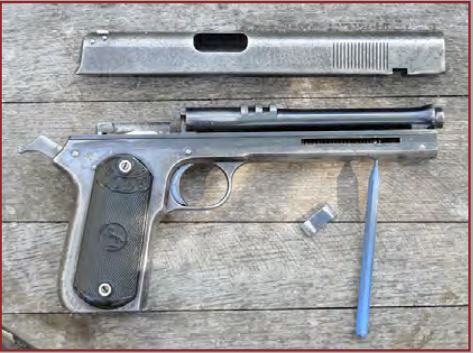 There were variations of the Model of 1900 Sight Safety tested by the U.S. Navy and the U.S. Army. The Navy purchased and tested 250 pistols. The U.S. The Army had two orders, the 1st order was 100 pistols and the 2nd order was 200 pistols.

The “Sporting Model” was sold only on the commercial and contract market. This pistol is chambered for .38 ACP (Rimless Auto) with a 7 round magazine. The barrel length is 6 inches and fires from a locked breech. The “Sporting Model” years of production were from 1902 until 1907 with a total production of 6,910 pistols. 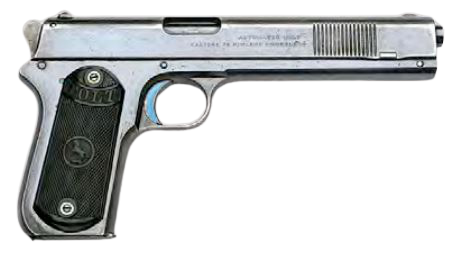 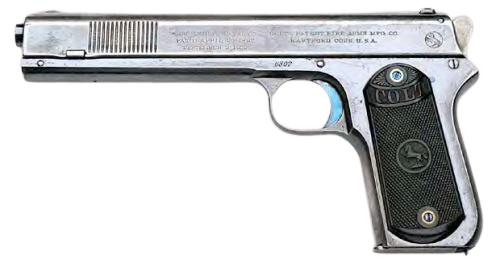 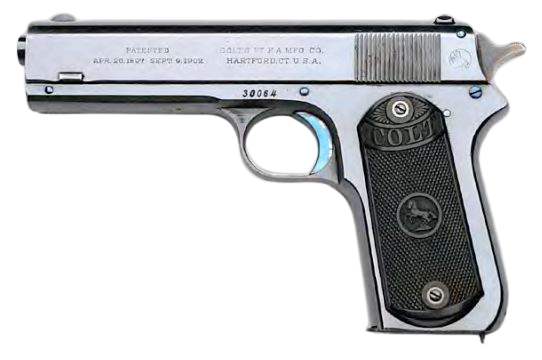 The U.S. Army Ordnance Department was encouraged by the result of the “Colt Automatic Pistol” competitive tests and field tests. The U.S. Army requested that Browning and Colt add some features to the “Colt Automatic Pistol” design. The requested features include an increased magazine capacity, a slide hold open device, an improved takedown plug and a lanyard swivel. In 1902 Colt produced the first “Military Model” initially for the U.S. Army.

The first “Military Model” incorporates the two swinging link barrels. This Colt “Military Model” is chambered for .38 ACP (Rimless Auto) with an 8 round magazine capacity. The 6 inch barrel length was retained and fired from a locked breech. The requested additional features of a slide hold open device, an improved takedown plug and a lanyard swivel were incorporated in the pistol.

The “Military Model” serial numbers began from the “Sporting Model.” The pistol was produced for commercial and military sales. The U.S. Army Ordnance Department issued a contract to Colt on July 15, 1902 for 200 “Military Model” pistols.

Similar to the “.38 Automatic Pocket Model” the “Military Model” was produced for a relatively long period. The years of production were from 1902 until 1928 with a total production of 18,068 pistols. 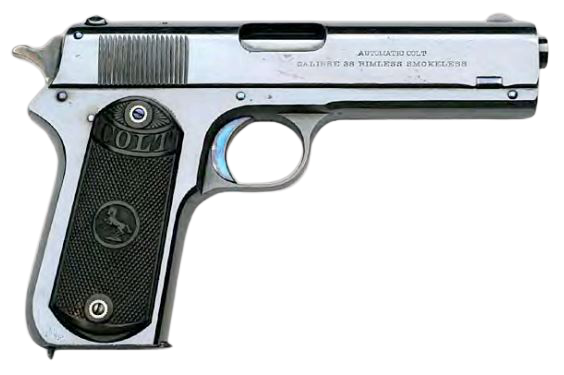 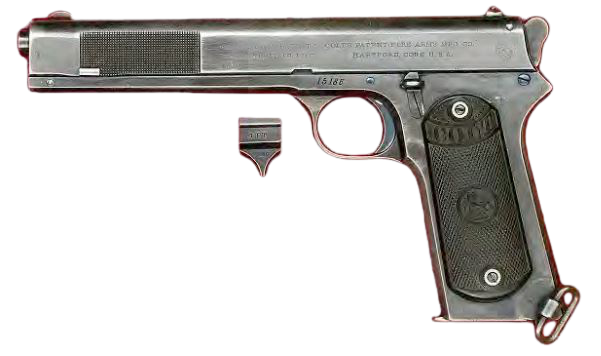 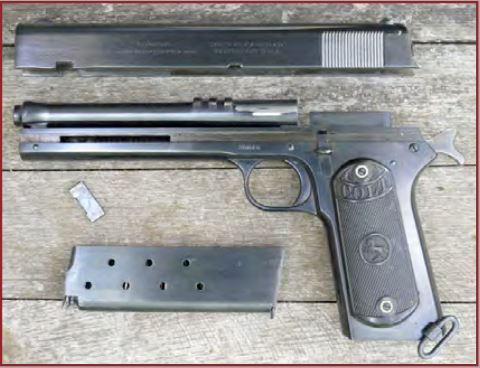 In 1903 Colt produced a new Browning design, the Model M pocket pistol. The following illustration depicts significant design features that appeared with this pistol. The Colt ``Model M'' incorporates an internal hammer. The sear mechanism is located in the back grip strap. The pistol incorporates a grip safety and an external thumb safety. The magazine is inserted through the grip and trigger yoke for activating the seer. The recoil spring is guided by an internal rod. The muzzle of the barrel is guided by a removable bushing mounted in the slide. All of these features are important for subsequent Browning pistol designs. 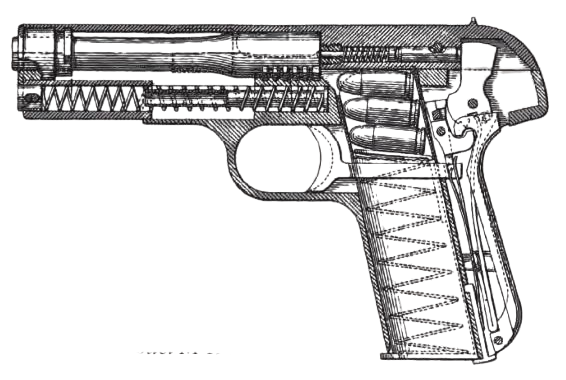 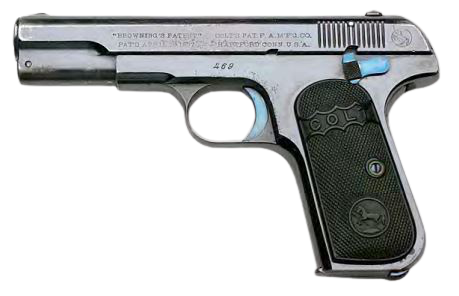 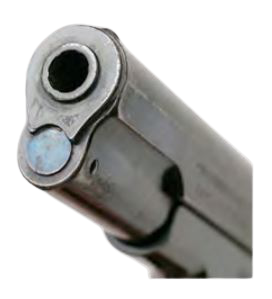 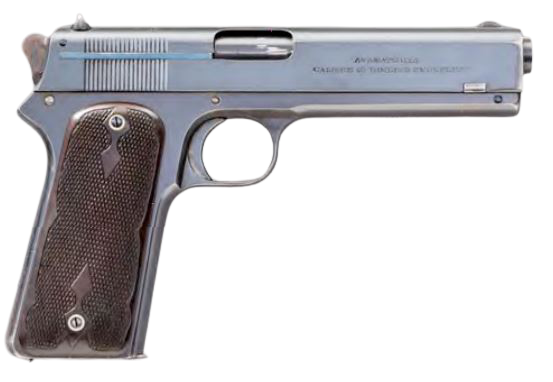 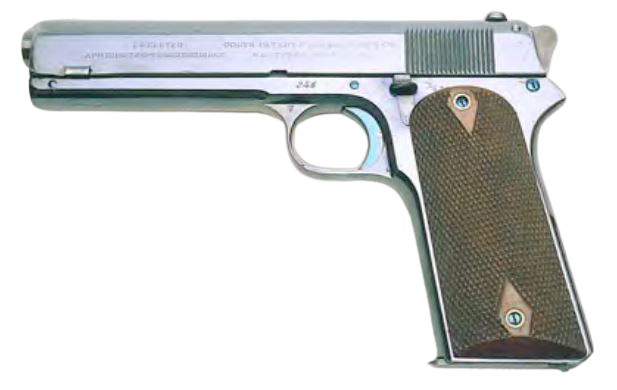 This “Military Model” is chambered for the .45 ACP (Rimless Auto) cartridge. The pistol incorporates a 7 round magazine with a 5 inch long barrel. The slide hold open device and the improved takedown plug were included on this “Military Model.” As with the Browning swinging link barrel system the “Military Model” fired from a locked breech. 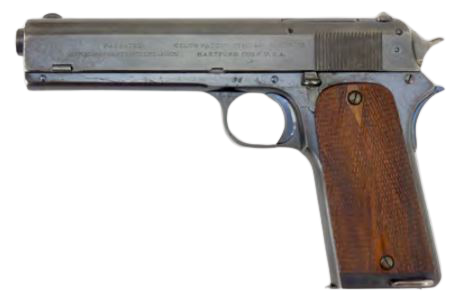 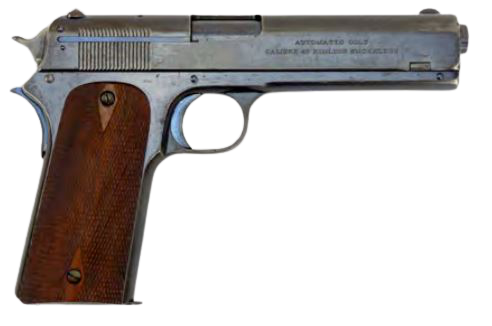 The 1907 Contract Government Model modified “Military Model” of 1905 utilized the new .45 ACP (Rimless Auto) cartridge. For test and evaluation purposes the U.S. Army Ordnance requested the following modifications to the “Military Model” of 1905. The pistol was to include a grip safety, a slide hold open device, a smaller hammer spur, a large vertical ejection port, an automatic loaded indicator and a lanyard loop.

The 1907 Contract Government Model for military test incorporates the .45 ACP (Rimless Auto) with a 7 round magazine. The pistol fires from a locked breech with a 5 inch long barrel. There were 207 pistols for the 1907 Contract Government Models produced. For the US Army Cavalry there were 200 pistols. Seven pistols were given to select individuals.

Field test results for the 1907 Contract Government Model were less than satisfactory. In service there were some pistols that experienced sear breakage, uncontrolled full automatic fire, firing pins breaking and incessant jamming.

In 1908 Colt brought to the commercial market two new Browning designed pistols. The Colt Model M in .380 ACP and the Colt Model N in .25 ACP.

The Colt Model M 1908 is chambered for the .380 Military Model of 1905 1907 Contract Government Model 1907 Contract Government Model Military Model of 1905 ACP cartridge. John Browning designed the .380 ACP cartridge in 1908. The 1908 Pocket Hammerless had a barrel length of 3-3/4 inches with a 6 round magazine. The pistol incorporates a grip safety and an external thumb safety. The pistol utilizes the cartridge blow back for operation. The Colt Model M 1908 Pocket Hammerless was primarily sold on the commercial or contract market.