Entry Point- A Guide To Collecting

Back around the turn of the last century owning a gun was pretty much considered a rite of passage if you were a rural young man.  Most gun manufacturers turned out simple single-shot .22 and .32 caliber rifles that were inexpensive to acquire and easy to operate.  The better manufacturers like Winchester, Remington, Stevens, Hamilton, Hopkins and Allen, Savage, Quackenbush and a few others produced guns of respectable quality.  Other manufacturers like Meridan, Clive, Hoban, and Durand made guns that were barely functional and probably dangerous to use.

For many of us older collectors, our first introduction to guns was a handed-down piece from a grandfather, father or uncle.  Many were originally obtained as premiums for selling merchandise.  A typical 1920 period ad reads:

…we give it free for selling only 30 packages of Bluline at 10 cents per package.  Send us your name and address.  We trust you. Return our $3.00 after the sale of our Bluline and we’ll send the rifle at once” (Pictured was a Hamilton takedown model)

Any boy (or girl) who wanted a rifle could have one by simply putting in a little effort.  The profusion and availability of these guns cannot be overstated.  Hamilton Rifle Company, for instance, made 700,000 boy’s rifles between 1900 and 1911.  They made at least eight basic models.  Today, assembling a complete collection of Hamilton’s would be a challenge, but not to the pocketbook. 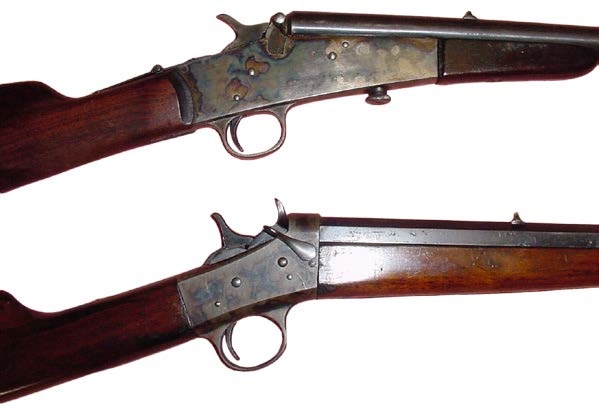 Figure 1 – A pair of Remingtons:  Their No. 4 Rolling Block Take-down Model (the lower rifle) is probably the top of the field for boys rifles, the early versions had beautifully case hardened frames.  Above the No.4 is shown the Model 6, Remington’s entry into the low-priced market.  Again, early guns had case-hardened, riveted-together frames.  Later they transitioned into forged, blued frames.

Figure 2 – Davenport’s Brownie was another quality firearm.  It was made in both .22 and .32 calibers.  The “ripple” style of case hardening color is quite unique.

These guns are frequently found at gun shows, gun shops and pawnshops.  Prices range from under $100 to $350 for better quality and condition pieces.  Oddly, the low quality guns are the hardest to find simply because they were not deemed worth saving.