We never expected to designate Lugers as a candidate for Entry Point collecting but the recent influx of several large dispersals of collections has provided what will probably be a temporary price drop and an opportunity to get into this fascinating specialty at relatively bargain prices.

Lugers, it has been said, are the world’s second most collected type of gun, right behind single-action Colts. Whether true or not, they have every characteristic we normally associate with collectability -- historical significance, quality, number of variations, appearance and sources of reference. The look of a Luger is somewhere between beautiful and sinister, depending on your point of view.

At this writing, common specimens in reasonably good condition can be obtained for under $1000. The on-line auction houses abound with extensive offerings that hammer down in that range.

Lugers were made by six basic manufacturers -- In

KRIEGHOFF (though not all at the same time) and 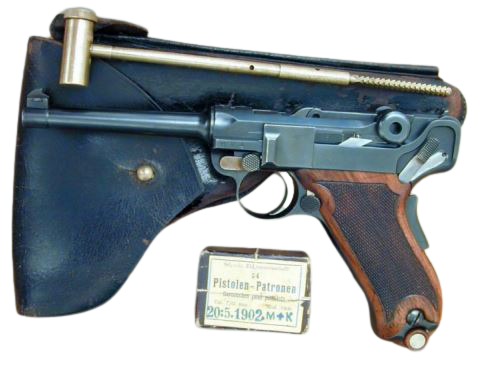 by WAFFENFABRIK BERN in Switzerland. Also, some were assembled from parts in England and bear VICKERS LTD. markings. Assembling a collection of all seven markings is an attainable goal. As an entry point, acquiring your first Luger can also lead in related directions--possibly as a start to collecting handguns of World War I or II.

The variations are nearly endless, 1400 by some counts -- manufacturing evolutions, country markings, styles, assignments to armies, police, navies and air forces along with civilian models are among the distinguishing characteristics. Pistols sold to foreign governments often carry national emblems and unique features. The accompanying accessories will keep the collector busy for a lifetime. And best of all, dozens of authoritative books have been written on the subject. Those who have invested in Luger books as they were published have found that their investment has paid double dividends-- first in the knowledge acquired but also in the increase in value of the books on the secondary market. 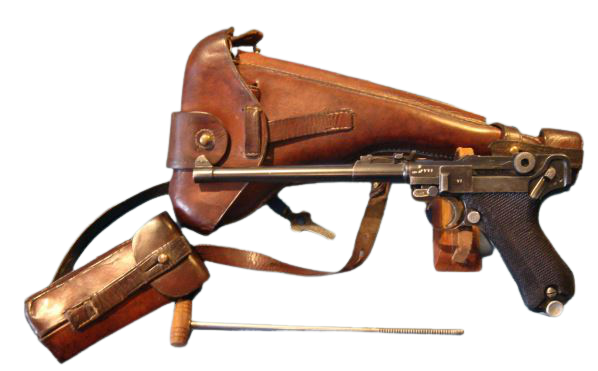 Figure 3a- DWM- The first Lugers evolved from the Borchardt pistol. DWM was the first maker and their first military contract was with the Swiss in 1900. They always had a close business relationship with Mauser and in 1930 Mauser assumed all Luger production from DWM.

Figure 3b - Erfurt was a state-owned arsenal that produced Lugers exclusively for the German Army. They operated only between 1910 and 1916 when their pistol production ceased to enable concentration on rifles for the War. Their tooling for the Luger was ultimately passed on to Simson.

Figure 3c - After World War I, in 1918, Simson & Co. was chosen by the Allies as the sole firm to produce and supply Lugers to the small German army allowed by the Treaty of Versailles. Using tooling acquired from Erfurt, they produced about 25,000 Lugers. They were a private firm with Jewish ownership and eventually fell foul to Nazi anti-semitism.

Figure 3d - Lugers were basically only assembled by Vickers using parts supplied by DWM. Most of the production went to the Dutch market where they were used in Indonesia

Figure 3e - Mauser began producing Lugers from 1930. As a major producer, they made over one million Lugers between 1934 and 1942. Many Mauser-made Lugers were sold to foreign governments and exhibit a fascinating array of national symbols.

Figure 3f - Krieghoff began production in 1935 , probably using tooling from Simson. They remained in production until 1945. Many were supplied to the Luftwaffe but they proved unpopular because of the cramped space in cockpits of the ME109. Most pilots preferred Walther PPs or PPKs.

Figure 3g - Waffenfabrik Bern was the only non-German maker. The Swiss established their own capability when World War 1 halted the supply of Lugers from Germany