I Have This Gun issue 1

I Have This Gun

Attached are photos of an interesting style of percussion lock. As you can see, the hammer is partially enclosed within the lock. The lock is marked Grierson Patent, Bond Str. London. Can you tell me anything about this Grierson? 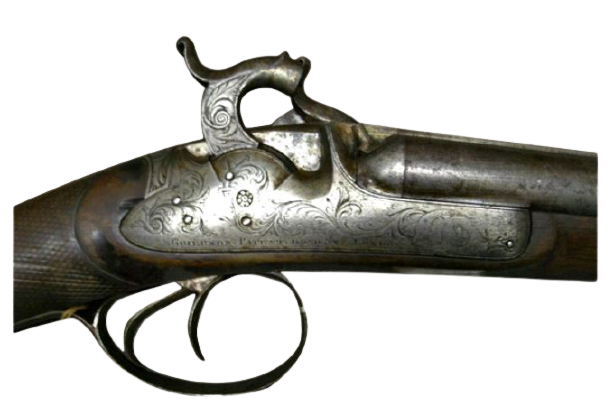 Charles Grierson took over the shop and business of London gunsmith John Tow about 1793 and remained active until 1845. Grierson was entitled to call himself “Gunmaker to His Majesty” as he succeeded John Tow as “Gentleman Armourer to His Majesty’s Stables in Ordinary.” 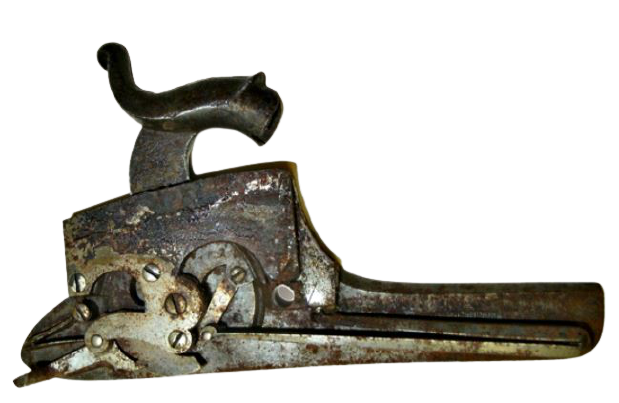 I’m printing a photo of a gun exactly like yours from the book British Gunmakers Messrs Griffin & Tow and W. Bailes, 1740–1790, by W. Keith Neal and D.H.L. Back. They say this gun was made ca. 1840. Even though the lock is marked “Patent” they were unable to find a patent covering this inside hammer placement. MFC 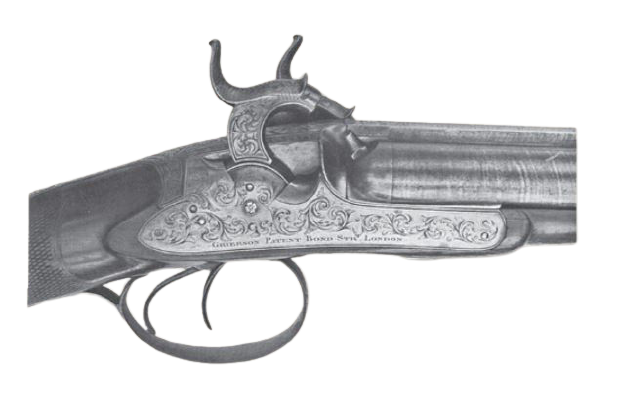 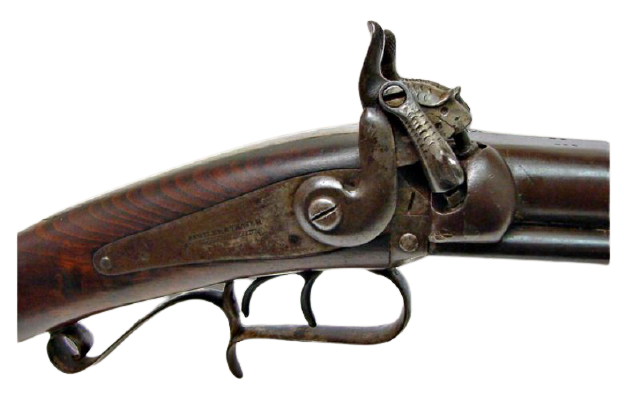 The receiver and lockplates are marked “Beutler & Traver Ann Arbor.”

I realize the three numbers on top of the receiver are the bore sizes of the three barrels. Can you tell me anything about the makers? 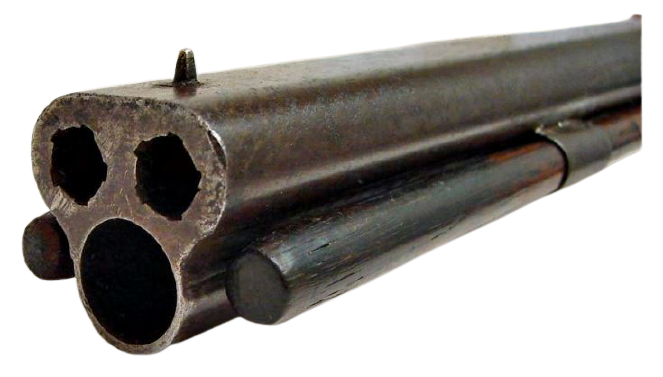 By the 1872 Directory, Beutler’s name is no longer listed, and Richard C. Traver is listed as a gunsmith and Alva Traver as a machinist. All the yearly directories were not available. The next earliest was 1860, and they were not listed. So, I assume that the gun you have was made ca. 1865-1868.

Question: from Sam Engel, via the Internet

I have a Model 1888 German Commission rifle. I know they have undergone a number of updates and alterations. Can you tell me from the markings on my rifle the meanings of the changes?

Thank you for all the photos you attached. We will use only a few to illustrate the comments. 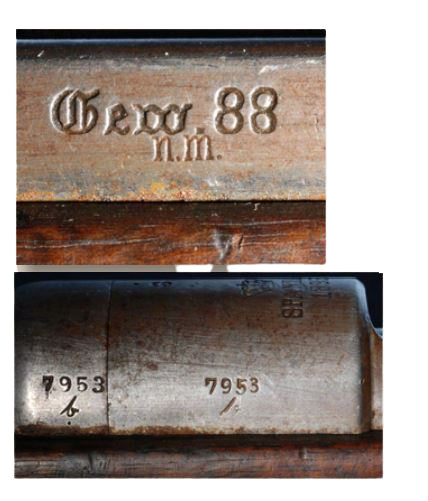 The M88 is distinctive with its metal barrel jacket giving it a bulky appearance. Contrary to popular belief, the barrel jacket was not designed for “cooling” the barrel, but rather for improving accuracy. The barrel was not encumbered in wood bedding and could resonate and vibrate along its full length—much like a “free-floating” barrel on a target rifle.

Your rifle has a letter S with a punch mark over it on top of the receiver above the maker’s name, Spandau Armory. The S indicates the chamber has been reamed out for the 8 mm Spitzer cartridge. An Imperial Decree of March 24, 1903 ordered this alteration, but it was not performed until squads of gunsmiths were sent to the arsenals and encampments in the Summer of 1905. The punch mark above the S indicates your gun has an improved barrel reinforced where it screws into the receiver. 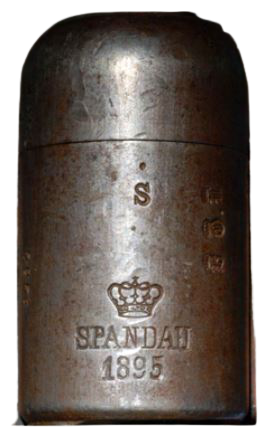 The letters N.M. under the GEW 88 on the left side of the barrel mean that you have a barrel made with “new material.” The new material is steel with a higher carbon content. GEW is an abbreviation of Gewehr (rifle) and 88 is for 1888, the Model year.

I can’t see a clear photo of your rear sight, but with all the changes mentioned above, it is very likely your rear sight has been updated with a new range of meter markings. These rather homely, and quite inexpensive, rifles are quite fascinating. Their modifications represent the rapid new developments in military small arms prior to WW1. MFC

At a recent Montreal gun show I picked up the flintlock trade musket shown in the attached photos. It looks to be untouched for a century or two. The name Davidson is on the lock, and it looks like D D on the barrel between the proof marks. There is decoration on the lock and other parts of a flower or leaf. Have you heard of this Davidson? 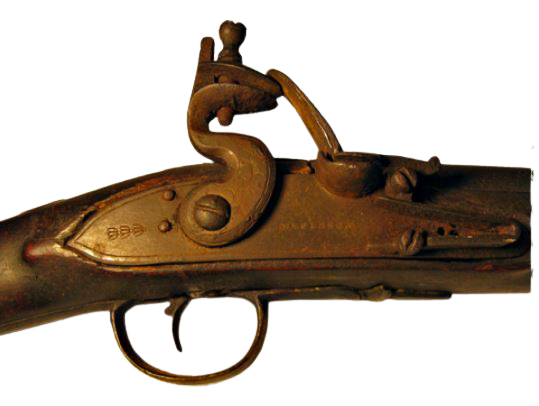 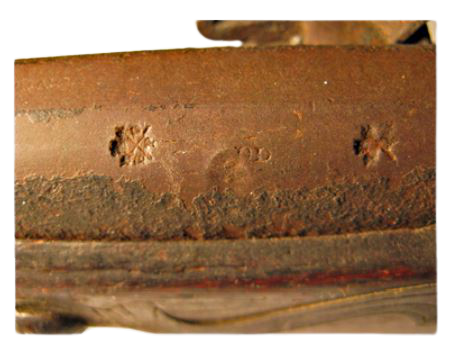 Maybe this is the maker: Duncan Davidson, Birmingham, 1811 - 1822, and then Davidson & Son 1822 - 1839.  Duncan Davidson’s initials fit with the marks between the Birmingham Proof Marks on your barrel.

I have several flintlock trade pistols (the common ones with 9” brass barrels), that have the Tulip motif, as has your musket. It seems to be a common motif on trade flintlocks of the early 1800s. Can any of our readers tell us more about this style of trade gun or about Davidson? MFC 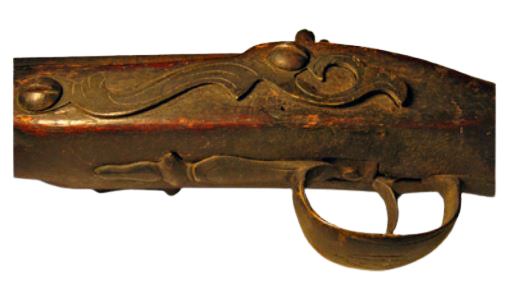 Question: from Mike Silverman via the Internet

I recently bought a large European military pistol that was converted to percussion with an unusual safety that moves over the nipple when the gun is in the half-cocked position.

What puzzles me is the gun’s country of origin since I can’t find anything on its markings. 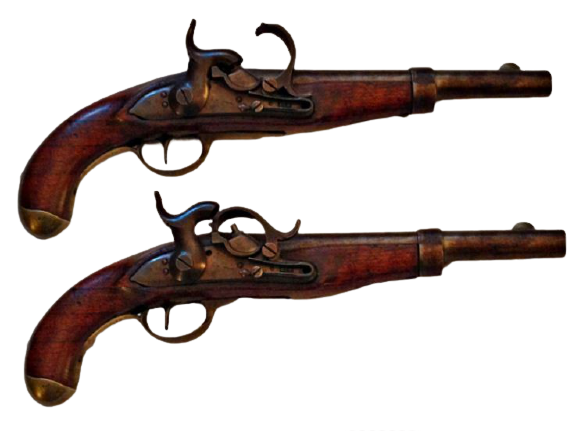 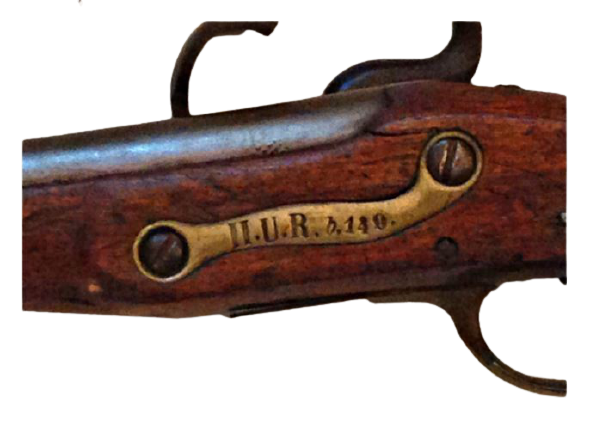 The inscription on the sideplate is definitely a military unit marking. I don’t find it in any of my reference books, but if I had to guess, I would say 2nd Regiment, Uhlan, Squadron B, pistol number 140. As you may know, the German word Uhlan is about the same as Lancer. If any of our readers can tell us the correct meaning for this military unit, please do. I do not know the meaning of the KFF mark on the gun. MFC

We have an interesting Tower 1869 British muzzle-loader that has been converted to breechloading cartridge. A block lifts up for loading the cartridge a bit like the Trapdoor Springfield, except that the release knob is on the left side of the block. You rotate it all the way to the right, and lift the block.

The following is stamped on top of the breech block: T. Mabbutt / Matthews / Patent / No. 182. What can you tell us about this gun? 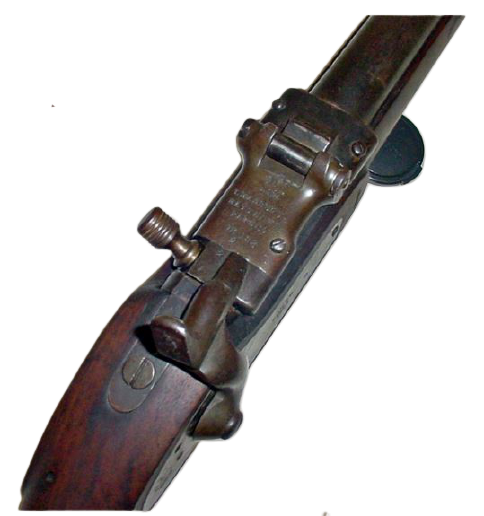 Thomas Mabbutt was in business for himself in Birmingham, England from 1867 – 1872. After that, he went to work for the Abingdon Gun Works Co. as their manager, and was still shown in the Birmingham directories as late as 1907. 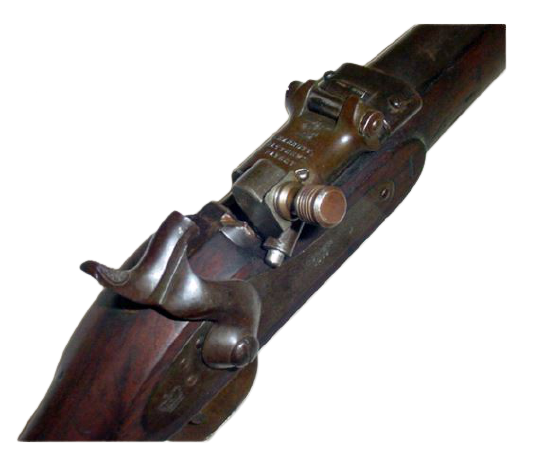 The great grandson of Thomas Mabbutt has opened a large museum of arms and related items on an 86-acre site near Stratford-upon-Avon (home of Shakespeare) in England. Among other collections is the family’s private collection of arms and armor gathered over 250 years. Check out Stratford Armouries, www. stratfordarmouries.co.uk MFC 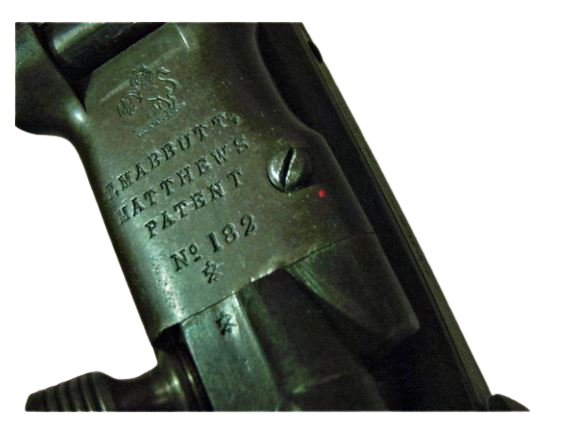