I HAVE THIS GUN issue 5

I have two German military cartridges, and I’m wondering if you can tell me the meaning of the color bands and the heads tamps.

I don’t know much about cartridges, but I have friends who do. the following is from John Moss, San Francisco.

The 8 mm (7.9 x 57JS) with the black tip is Armor-Piercing Tracer. P69 is the code for the cartridge case manufacturer Patronen-, Zündhütchen- und Metallwarenfabrik A.G., vormals Sellier & Bellot, Schönebeck ad Elbe. e S* means the case is made of 72% copper/brass. e 8 is the manufacturer’s lot number, and the 37 indicates made in 1937.

The cartridge with the large black band is known as B-Patrone, short for Beobachtung Patrone (observation cartridge). It was originally designed as a training cartridge because the bullet makes a big puff of smoke when it hits something. Some collectors incorrectly call them high-explosive.

The headstamp mark “am” is the code name for Gustloff-Werke, Otto EberhardtPatronenfabrik, Hirtenberg, Niederdonau. e S* means the case is made of 72% copper/brass. No. 21 is the manufacturer’s lot number, and 42 indicates made in 1942. e headstamp tells you nothing about who loaded the cartridges. You must have the box label to know. anks, John. MFC

I have a friend who owns the over/under gun shown in the photos attached. One barrel is 8 mm reid and the other is a 16 gauge shotgun. The name on top of the barrel is Frant. Blahout Plzen. Enclosed are photos of a great many marks on the bottoms of the barrels and on the action. See the one photo of the bottom of the gun showing a kneeling archer and the letters O.S.Z.M. What can you tell me about this gun?

The many photos of the marks on the bottom of the barrels and inside the action were too dark and blurry to reproduce, but I can make out most of the marks. ere are standard German Nitro Proof Marks, Krupp Steel barrels, 16 gauge 70 mm (2-3/4” shells), 8 mm x 57 mm (rimmed), and two Czechoslovakian Nitro Proof Marks. is indicates the gun was made in Germany, sent to retailer Frantisek Blahout in Pilsen, Czechoslovakia, and he sent it to the Czech proof house before he could sell it.

I did not know the meaning of O.S.Z.M., so again sought help from the German Gun Collectors Association (their contact information is listed in “Clubs, Contacts and Resources'' in Arms Heritage magazine). Jon Spencer tells me that the kneeling archer, Kniender Armbrustschütze in German, is a trademark of gunmaker Otto Schueller of Zella Mehlis, hence O.S.Z.M. ank you, Jon. MFC 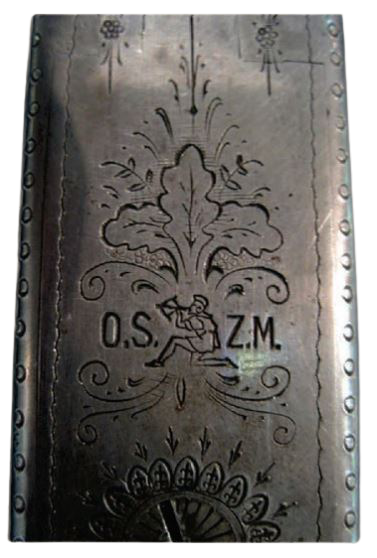 Question: from berryptch via the Internet

I see a lot of Russian Model 1895 Nagant revolvers are common these days. Cabela’s has been selling them at the stores on sale at $119. But most of them that I’ve seen are made in the 1940s. I had a chance to buy one from a private party recently that is dated 1916. Here is a photo of the marks on the le side of the frame. Can you translate them for me? 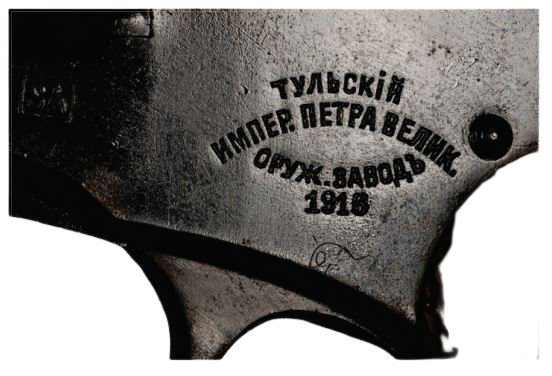 The Cyrillic writing on the side of the receiver translates to: Tula / Emperor Peter the Great / Ordnance Factory / 1916.

Tula is a famous Russian government arms factory about 90 miles from Moscow. During the pre-Soviet period, it was named aer Czar Peter the Great. You are fortunate to have found one of these revolvers dating before the Russian Revolution.

I notice there is a cartouche on the le side (perhaps not visible in our reproduced photo), just below the cylinder, of a box with SA inside the box. It is the property mark of the Army of Finland: Suomen Armeija. It first came into use aer June 1942, and was used until 1968, to mark non-Finnish-made arms. 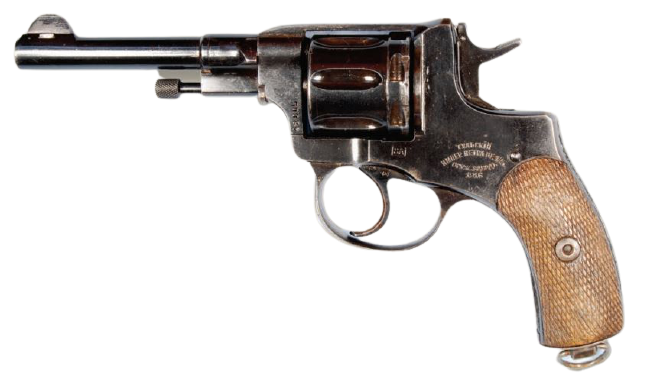 A considerable number of Russian Model 1895 revolvers fell into Finnish hands during their war of Independence with Russia in 1918. Because of the unusual cartridge, the Finns held these guns in stock rather than issue them to their army. But during WW2 a shortage of arms caused the Model 1895s to be issued to other than frontline troops, such as military police and training units. In the 1960s Interarmco imported most of the remaining revolvers into the USA. MFC.

I have read that the pistol used to assassinate Archduke Franz Ferdinand and his wife on June 28, 1914 in Sarajevo was a Browning. But I have seen references saying it was a Model 1900, a Model 1910, is missing, is in a museum, etc. Can you straighten this out for me? I have a Model 1910 in the 30,000 serial number range. Was this gun made before 1914? 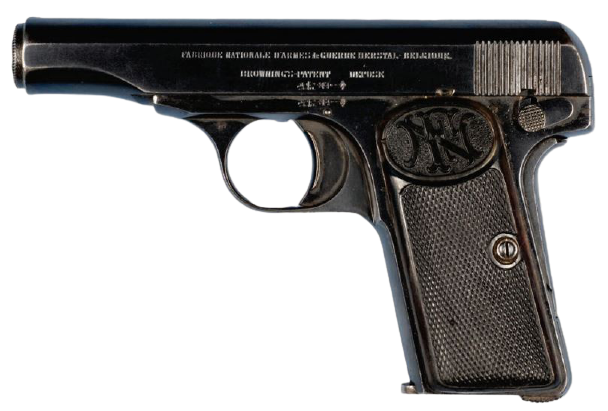 I agree, there is a lot of misinformation on this incident. In the book John M. Browning, An American Gunmaker, it states incorrectly that a .32 caliber FN Browning Model 1900 was used by Gavrilo Princip to assassinate the Archduke, and thereby start WW1.I think the most up-to-date book, and the most reliable for FN Browning pistols is FN Browning: Side-Arms that Shaped World History, by Anthony Vanderlinden.

Vanderlinden reports that the court records show the four Browning Model 1910 pistols recovered from the conspirators have serial numbers 19074, 19075, 19120, and 19126, and were part of the same shipment to FN’s agent in Belgrade on December 3, 1913. e caliber was not mentioned, but the bullets recovered from the body were 9 mm. A period photograph from the trial shows two pistols, magazines and ammunition. Since 2005, the pistols have been on display in the Austrian Museum of Military History in Vienna. Your pistol was probably made about 1913. MFC

I have a double rise in approximately 8 mm caliber. the marking on the barrel rib is STENDA-WERKE and KRUPP. You can see it has a very wide receiver and is a break-open action by lowering the lever under the trigger guard. What do I have? 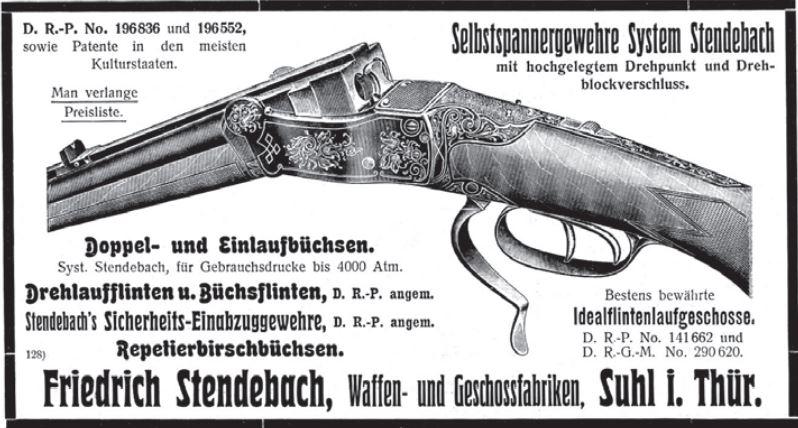 You have a very nice German double ride, and an unusual one at that. I got some preliminary help from Dick Hummel at the German Gun Collectors Association. He sent a scan of an advertisement showing a double ride just like yours from the rm Friedrich Stendebach in Suhl. e 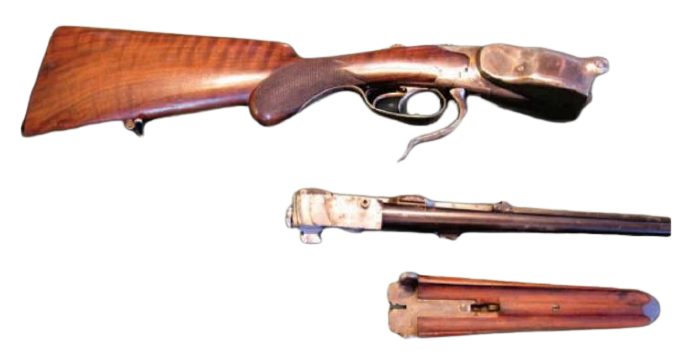 There is no doubt this is the same action as yours. Two German patents, 196836 and 196552 are mentioned in the ad. Some of the members of the GGCA are researching this, and we may have more information in a future issue. MFC

Question from Fred Johnson, via Internet

I have a Colt D.A. .38 Army revolver with odd things. the bottom of the grip strap is marked U.S. Army Model 1894 128513, and there is a lanyard ring below the 1894. the last patent date on the barrel is March 5, 1895. And most mysteriously, it has a rear sight very professionally cut into the back of the top strap. Have you seen a revolver like this? 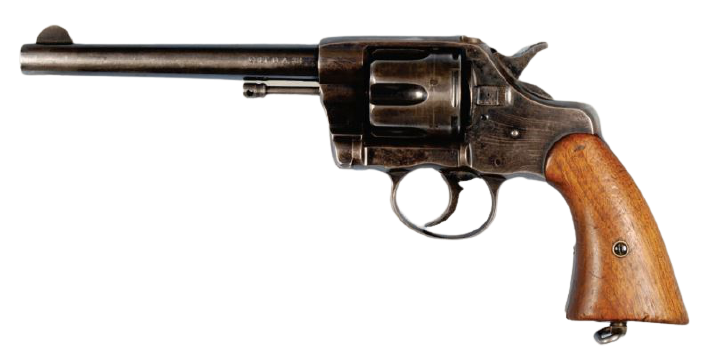 Yes, I have seen one with a sight just as you describe. at is the unusual part of your revolver. I rely on Bob Best’s book A Study of Colt’s New Army and Navy Pattern DA Revolvers: 1889–1908 when I receive questions about these Colt D.A. 38s. there have been so many modifications of these guns over the years that it is difficult to classify them. 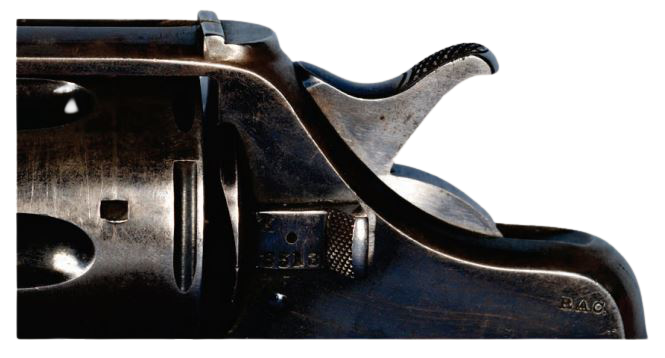 Lanyard swivels did not appear on the butt of the Army models until the Model 1901. So, yours has been retrofitted in one of the many refurbishments these guns underwent. Colt records show a large batch renished in 1901, including the installation of the lanyard rings. 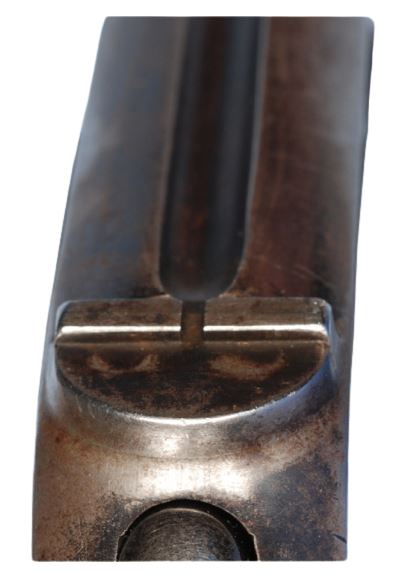 Bob Best has also seen one of these revolvers with sights like yours. He feels these sights were added by target shooters. If several are found exactly with the excellent installation as yours has, perhaps they were done by an Army ordnance tech for one of the Army’s shooting teams. MFC