I have this .30 caliber military ammo can that has some unusual features. See the photos for the hook arrangement on the bottom. Maybe a de-linker?

I consulted my friend, Robin Bartel, who is most knowledgeable on military “stuff.” Here is what he had to say: 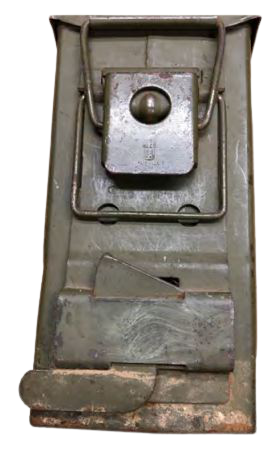 “That’s the M1A1 ammo can. A late WW2 development that was designed to be semi permanently attached to the M1917A1 tripod. The spring-loaded catch hooks under the lip of the bracket on the tripod that usually held the wooden ammo box.  It’s nothing rare just a little uncommon.” MFC 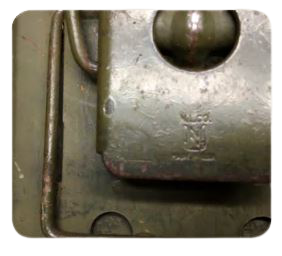 Question via the Internet from Gary Hartman

I have a vintage double barrel shotgun that is stamped T. BAILEY NEW ORLEANS, the last part not very legible, on the top barrel flat. Both barrels are approximately 16 bore. The barrels have gold inlays and platinum pressure plugs. The underside of the barrels have the Birmingham proof marks with SWINBURN’S  between the proof marks. The lock plates and most other parts are engraved with hunting dog scenes and floral designs. I would appreciate any information you may provide on the gun and barrel makers and when this gun may have been made. 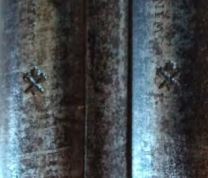 Your muzzleloading shotgun may have come to New Orleans just as you see it, and Thomas Bailey engraved his name on the rib as the retailer.

Or perhaps the Swinburn barrels were imported and Bailey built the rest of the shotgun. He certainly was capable of building a fine gun as you will see from his advertisement below. The British directories list Swinburn as a barrel maker, as well as a gun & pistol maker.

The Damascus barrels have the Birmingham, England, view marks on each barrel, and may have the proof marks a little higher up the barrel. I can’t see them in the photos. The View mark has a small V between the shafts of the crossed scepters. The Proof mark would have a P in the same place. This style of mark was in use from 1855 to 1904, so doesn’t give us a precise date.

Thomas Bailey, gunmaker from England, came to New Orleans with his family in 1840. He brought with him two sons, Thomas, Jr., and John, both of whom became gunmakers in New Orleans. Thomas Bailey, Sr., enjoyed a fine reputation as a gunmaker.

City directories show Thomas, Sr., had a shop on Chartres Street from 1846-1861. His advertisement listed him as a gun and rifle maker, re-stocker, converter of flint to percussion, a seller of accessories, and “every description of guns and pistols made on the shortest notice.” Nothing is heard of him after 1861.

In Geoffrey Boothroyd’s book, Revised Directory of British Gunsmiths, he lists Charles Swinburn & Son of Birmingham as being in business 1851–1883. He specifically notes that Swinburn had a working relationship with Thomas Bailey of New Orleans.

The engraving on the lockplates and the thick gold bands indicate this is an upscale firearm. MFC

I have this Colt revolver and want to know if having the address upside down on the barrel is a factory error, and if so, does it increase or decrease the value? Also, it has a low serial number, three digits on many places, and on the bottom of the butt are two two-digit numbers one above the other. 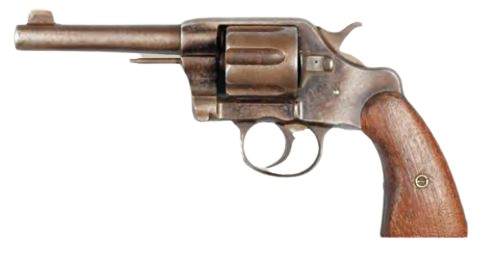 You didn’t give too many details on the gun, but from the photo, I can see that you have a civilian version of the U.S. Navy Model 1889, .38 cal Double Action revolver. The big clue is the absence of cylinder locking notches. When the gun is not cocked, the cylinder can turn freely, hence the short life of this model.

It is a civilian version because of the short barrel, and you mention only the four-digit serial number on the butt. If military, there would also be USN, an anchor, and other numbers and an inspector mark.

The three digit number on the parts, e.g., barrel, latch, frame, etc., are assembly numbers. The numbers on the bottom of the butt are Colt’s serial number. If the numbers, for example, are 24 over 46, your serial number is 2446.

The Colt address that is stamped upside down on the barrel is the address usually used on the Colt Military models, which have a 6” barrel. That stamp does not fit between the front sight and the front of the frame on the civilian 4-1/2” or the 3” barrel, so instead of making a new stamp, Colt just stamped it upside down on the right side of the barrel on the Model with the 4-1/2” barrel, and on the civilian model with the 3” barrel, they used a Colt’s address stamp as found on their Model 1877 Lightning revolver with a 3” barrel length. I guess these were the frugal years. 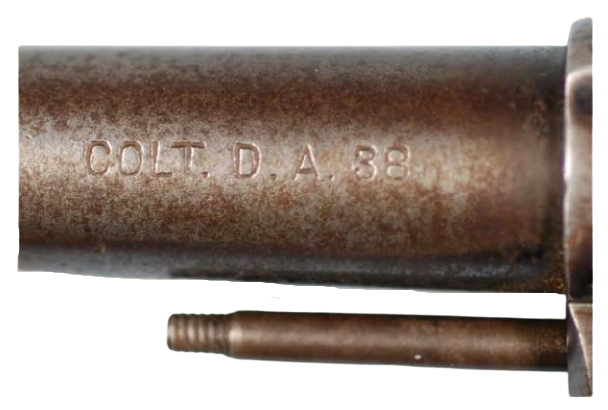 So, this is not a rare variation, but rather is an unusual example of cost-cutting by Colt. MFC

I have an early French Berthier carbine with the brass symbols shown in the photo. Can you identify them?

I sent the photos to a friend in France, General Francis Brossard. He answered immediately and enclosed several other variations of the symbol. Here are his words. 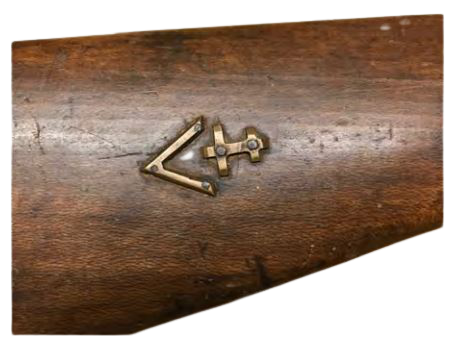 At the 1939 mobilization, the French Army was essentially equipped with old Levels and Berthiers from WW1 (the more recent MAS 36 was not available in big numbers and usually given to the best troops).

In the different “maquis”, many members of the Resistance used recovered weapons, concealed by the “Armistice Army”.

Among those, many Berthier (rifles and muskets).

It was common use to customize his rifle, often to burn the initials.

In this case, we have the classic “croix de Lorraine” and V of Victory, hand carved from metal on the stock.

Thank you, and we will publish some of the other examples you sent. 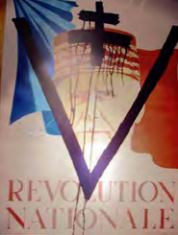 Here is a definition of Maquis from Wikipedia: The Maquis (French pronunciation:  [ma'ki]) were rural guerrilla bands of French Resistance fighters, called maquisards, during the Occupation of France in World War II. Initially, they were composed of men who had escaped into the mountains to avoid conscription into Vichy France’s Service du travail obligatoire (STO) to provide forced labor for Germany. To avert capture and deportation to Germany, they became increasingly organized into active resistance groups. MFC 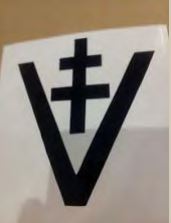 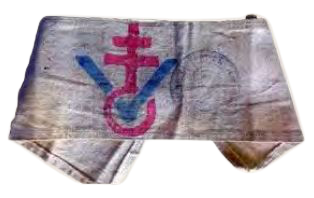 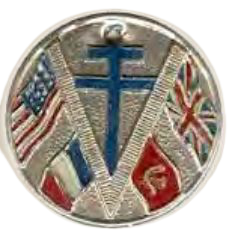 Question: via the Internet from Alan in Hood River

Here is a photo of some small marks on my Czech pistol. Can you tell me what they mean? 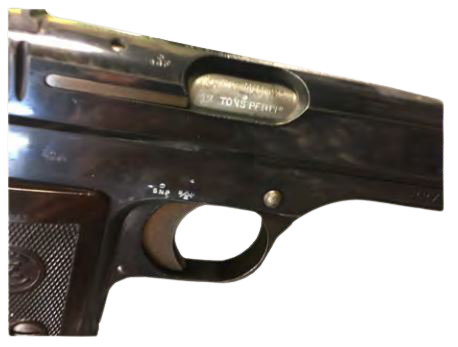 S B in the crossed scepters is the British Birmingham proof house date code for proof in 1967. The number 2 identifies the inspector. This date code system started July 18, 1950 and thereafter restarted January 1st until new date code stamps were started for Birmingham in the year 2005.

The “12 tons per square inch” started with the Proof Act of 1955. Your mark is not too clear in the photo, but the stamp includes the caliber or bore measurement in decimal parts of an inch, the nominal length of the cartridge case, and the pressure of the proof charge in long tons (2240 lbs) per square inch. For “square inch” they show a small outline of a square box with (") inch mark.

Crown/BNP also started with the Proof Act of 1955. It replaced the earlier Birmingham separate marks Crown/NP for Nitro Proof and Birmingham Crown/BP.

This information is on page 134 in Clawson’s book: “Colt .45 Government Models: Commercial Series.”  (not his big book on military 1911s) MFC

Question: via the Internet from Fred Davis

I have a Lee-Enfield Cavalry Carbine dated 1898 with severe modifications. The brass disk in the buttstock is marked 3-’04 R.I.C. 1486, so I assume this must be the model converted for the Royal Irish Constabulary. You can see from the photos that stock has been patched and a steel band has been fixed to the muzzle. Are these correct modifications?

A lot can be learned about this carbine from the changes it shows. Some of these guns were converted from Lee-Enfield rifles and some from Lee-Metford. The sling swivel in the buttstock is a quick indication the carbine had been a Lee-Enfield. 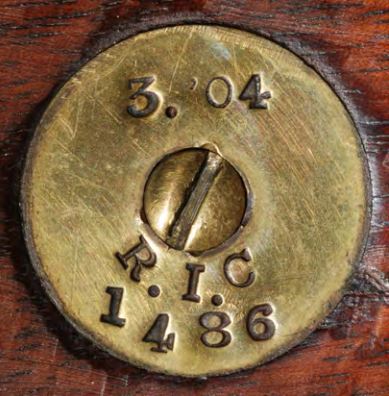 The wrist socket is marked Crown over V.R. Enfield 1898 L.E.C. I. So we know the original gun was a Lee Enfield Carbine Mk I made in 1898. The original carbine had “wings” protecting the front sight, and these were removed. The cleaning rod was removed. The nose cap was replaced with one that has a bayonet lug and a swivel. The forearm had to be shortened and reconfigured, so there will be patches of wood inlet. The screws that held the leather rear sight protector have been removed and wooden plugs in the screw holes can be seen on both sides of the stock below the rear sight. The middle barrel band was removed, and the cavity where its retaining spring was housed was patched. A steel sleeve was added to the muzzle to bring the barrel diameter up to match the British Pattern 1888 knife bayonet muzzle ring, and the proper bayonet stud was added to the new nose cap. The brass disk with the property mark of the R.I.C. was added 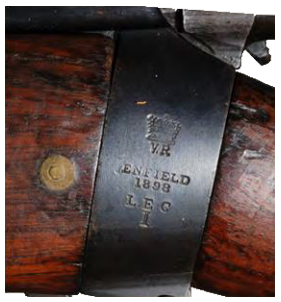 to the buttstock. The disk on this carbine is dated March 1904, indicating that this carbine was part of the first order of 10,000. In 1905 an additional 500 were converted, then 450 more in 1907, and finally, 250 in 1913. The Royal Irish Constabulary was the police force of all of Ireland from 1822 until the Irish Free State was formed in 1922. A new police force was formed, and the R.I.C. was renamed the Royal Ulster Constabulary and continued as the police force for Northern Ireland until 1998.