I have a .22 caliber Knife/Pistol combination. It is very nicely packaged in a fitted case marked C.D. Peacock, Jewelers, Chicago. Can you tell me anything about this knife—who made it, when was it made?

If you look up C.D. Peacock, Jewelers, Chicago, you will find they started their Jewelry business in 1837 in Chicago as The House of Peacock. In 1889 they changed the formal name to C.D. Peacock. In 1969, they sold to Dayton-Hudson. 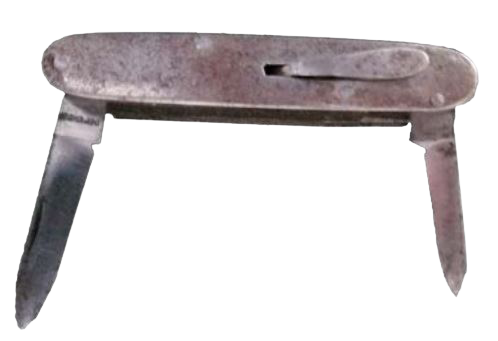 So, your knife/pistol was made by some firm and sold to C.D. Peacock to market using the Jeweler’s name—a very common practice

I can see in your photos that DEFENDER is stamped into the ricasso of your knife/pistol. That led me to a number of sources that illustrated the DEFENDER and the HUNTSMAN (a little larger than your model). These knives were made by the U.S. Small Arms Company, 38 S. Dearborn, Chicago, from about 1917 to 1934, when they were restricted by the 1934 Gun Control Act.

The “trigger” on the DEFENDER knives that I see in illustrations in the literature comes out from the back of the knife, whereas the trigger on your knife is on the side.

A knife looking just like yours is listed as having been patented February 29, 1916, by Leo Louis Rogers, patent no. 1,173,464. This one has the trigger on the side just as does yours.

Then I find that Leo Louis Rogers assigned his patent in 1917 to Edmund C. Moore, who with others, owned the U.S. Small Arms Company, and they were the manufacturers of the Defender and Huntsman knife/pistols. I assume that they started to make the knife as designed by Rogers and soon changed the trigger to come out from the backside of the knife rather than from the flat side. Perhaps they thought it was dangerous to have the trigger on the side; perhaps it was cheaper to incorporate it with the backs of the blades on the back of the knife; perhaps it was easier to manufacture that way—or perhaps they changed it for all three reasons.

So, yours is a very early variation of the DEFENDER knife, most likely having been made in 1917. MFC

I have a Mauser C96 Broomhandle pistols with very few markings. Other than the standard Waffenfabrik Mauser Oberndorf A/N on top of the receiver, it has only “DV” marked on the left side of the receiver flat below the above markings. There are no other marks that I see other than the two-digit serial number and the 1 to 10 marks on the rear sight ladder. It is a “flat side” model. This seems like a special model. 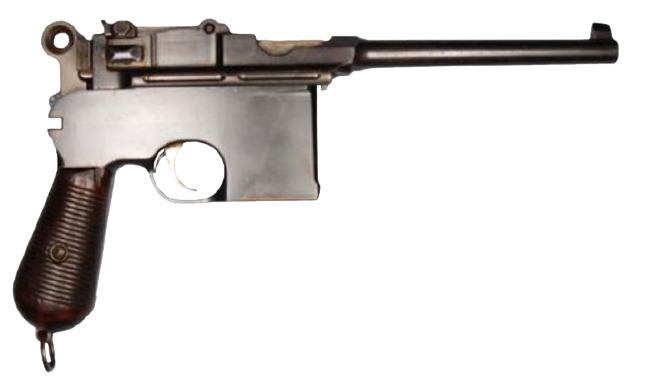 Yes, it is a special model made for the Italian Navy under an Italian Navy contract in 1899. There were approximately 5,000 produced under this contract, and many saw extensive use right up through WWII. This pistol has all the early features of Mauser pistols such as: 1) the flat side frame, 2) early large ring hammer, 3) the early style bolt with the single lug and the long extractor, 4) old style safety, and of course the two digit serial number.

These were manufactured in late 1899 or early 1900, and as noted, have an all smooth slab side flat frame with no milling marks. It has the correct “DV” firing proof on the left side of the chamber area. The underside of the barrel should have a “Crown/AV” Italian acceptance proof. It has the standard fixed front sight and an adjustable rear sight marked “1-10” (100-1,000 meters). It is fitted with a set of 23-groove walnut grips. You have an outstanding Italian Navy military pistol. Congratulations. MFC

Day’s Patent is for the rotary extractor that was installed on the Model 1902 and later Remington Rolling Block rifles. Previously, the cartridge was extracted a short distance after firing by an extractor that moved back as the hammer was pulled back. Then the shooter had to pull the fired cartridge from the chamber. Day’s improved rotary extractor actually ejected the cartridge from the gun and threw it a few feet behind the shooter. You will see from the photo that it is often difficult to read the patent date. MFC

Reading the history of the exploits of “Mad Anthony” Wayne and Wayne’s Legion in the 1790s, I see reference to an improvement he made in his men’s Charleville Muskets. I think this improvement might have only applied to his Light Infantry “shock troops.” It has something to do with “an oblique touch hole” in the muskets. What is that?

In consulting “The United States Army 1783–1811” by James Kochan, I find the following:

The improvement allowed an increased rate of fire. It consisted “of an alteration in the touch hole, i.e., by filling up the old, and drilling a new one, pretty large, in an oblique angle, in place of a right angular direction . . . which with a very fine-grained powder, will most certainly preclude the necessity of priming, the concussion of the air, in forcing down the charge, will cause each musket to prime itself . . . .”

In other words, the shooter did not have to take the extra step of putting powder into the pan. Some of the powder poured down the muzzle would pass through the enlarged, angular hole and enter into the priming pan. When the ball was rammed down, the push of air in front of the ball would push some powder out into the pan. This is a big savings of time in combat. Note below that Wayne’s men used a fine-grain powder, and that would flow better into the pan.

Wayne designed a special cartridge to use with this gun. The cartridge had a fine-grain powder and consisted of a ball and three buckshot. Wayne would never assign single-ball cartridges. The men were to carry 24 buck-and-ball cartridges each. MFC