What is the purpose of this device attached to the right side of a U.S. Krag rifle?

The only place that I could find information on this sighting device was in THE KRAG RIFLE STORY by Franklin B. Mallory with Ludwig Olson.

On page 195, there is a photo of a soldier shooting one of these guns offhand, and you can see that it is connected to a pedestal by what is described as a “Bowden cable and levers to place dots on miniature targets by remote control.” The Bowden cable is just the type of wire inside a sheath as is sometimes used in automobiles to open the hood from the inside of the car. So, the levers shown on the side of the gun must have been connected by cable to the apparatus on the tall pedestal to trigger projection. 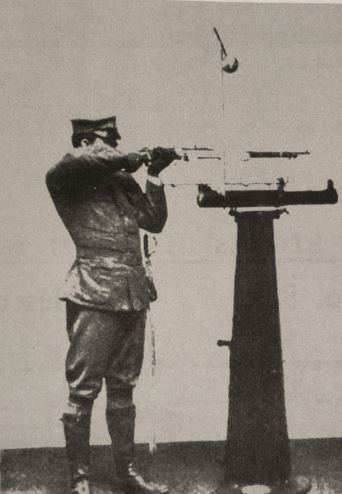 Also shown here is a photo of a schematic of the device shown on page 196 of Mallory’s book. Careful study of this illustration will enable you to completely understand the operation of this “Sub-Target Practice Machine,” as Mallory describes it. (well, maybe not “completely”) 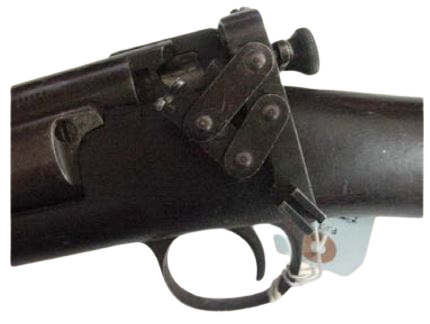 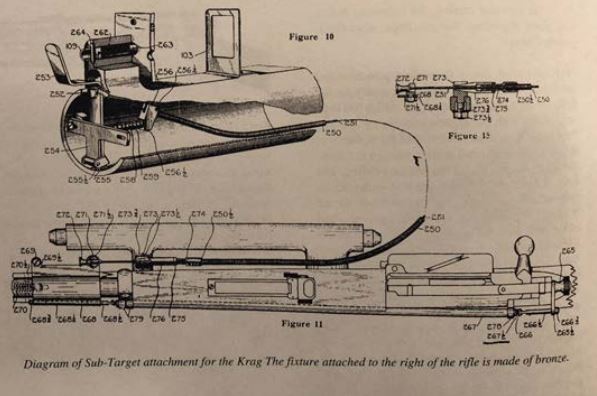 Question: from California via Internet

My father-in-law is an antique dealer in Indiana and is quite elderly. He’s pretty knowledgeable on old guns, and he told me he’s never seen another one like this. He acquired it in 1960 and was told it was made by a C. B. Turner from Grand Rapids MI in about 1835-40. One of the hammers is damaged and the front sight is missing. Someone (before my father-in-law purchased it) apparently tried cleaning the top of the barrel because it’s shinier than the rest of the gun. My father-in-law told me I could have a new hammer re-created as well as the front sight if I wanted to. These are my questions: Should I have it cleaned and the stock re-finished? Should I have a new hammer and sight made? What do you think the value is? Thanks for your help. 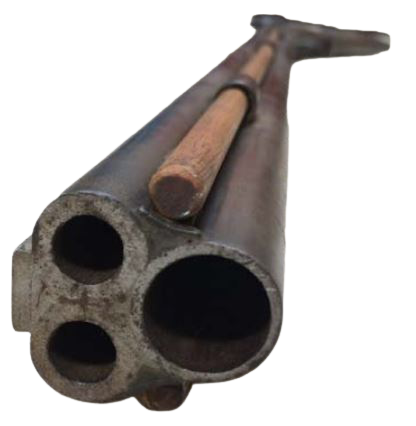 Chester B. Turner worked in Grand Rapids (on Bridge St), Michigan, ca. 1866–1871. He is known for making three-barrel guns. Sometimes he made a double shotgun with a rifle barrel underneath, and sometimes the pattern you have.

If you plan to keep the gun, I think you should have the hammer and sight repaired. Refinishing the stock will lower the value to collectors. 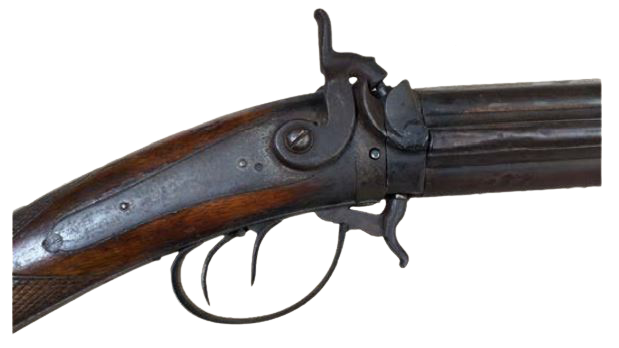 Perhaps the top of the barrel was buffed to see if a maker’s name might be engraved there.

If you plan to sell the rifle, I would do nothing to it. Serious collectors vary on how much restoration to make, so I like to offer “as is” and the buyer can decide what to do.

A value is difficult to place on a scarce gun like this. You would have a better chance for a higher price if you could sell or market it to Michigan collectors. MFC

I was at a pawn shop the other day and saw a Colt Model 1903 pistol caliber .32 acp. It differed from others that I have seen in that it had a barrel bushing around the barrel and a push button for take down just as you would see on a Colt 1911 .45 auto. Is this some rare variation? 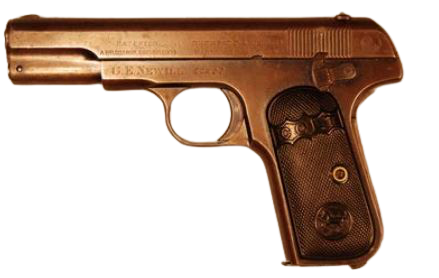 You have seen the first variation, which is found up to approximately serial number 105,051, October 10, 1910. There are some higher and lower serial numbers as Colt did not use the frames in exact serial number order. 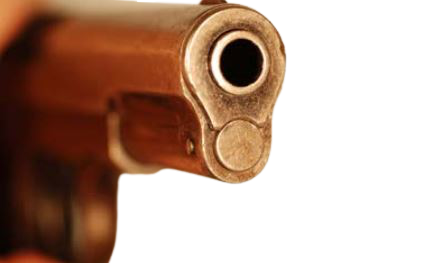 There are many variations on these Colt Model 1903 pistols. For example you can see earlier and later grips in my images. At serial number 72,000 the 4” barrel was shortened to 3-3/4”, the inscription on the slide changes, the Rampant Colt changes, and many more things. These changes make collecting this model very interesting.

Since the questioner did not supply any photos, I am showing two pistols from my collection of WW1 pistols. 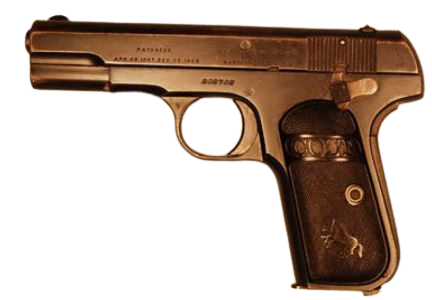 Serial no. 60,427 has the barrel bushing. This pistol was shipped to England June 26, 1907, and was carried by Commander G.E. Newill, Royal Navy. You might be able to see his name engraved forward of the serial number.

Serial no. 202,709 was shipped in 1916 to the Government of Belgium, as determined from the A in a diamond after the serial number and Belgian Government proof marks. Interestingly, this gun was shipped in a metal box with the Colt label inside.

Those interested in the many variations of Colt auto pistols should try to find a copy of “The Colt Pocket Hammerless Automatic Pistols II” by John W. Brunner. MFC

Question: From Gino in San Francisco

I have a double-barrel percussion pistol with strange hinged pieces over the nipples. Several photos are enclosed. The gun has BRIDGEWATER engraved on the left side, and LONDON on the right side. It has British proof marks, a lion’s head butt cap, and an engraved escutcheon on top of the wrist. Can you tell me about Bridgewater, and is it at all possible to learn anything about the owner from the crest? 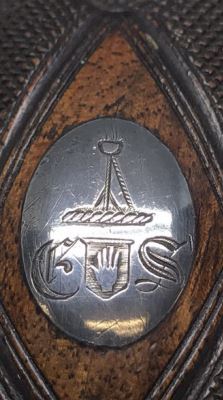 The hinged pieces over the nipples are called cap guards. Some call them Top-Hat. These were among the very first percussion guns, and the gunsmiths hadn’t yet figured out that they should hollow-out the striking face of the hammer so that it surrounds the cap when the hammer strikes. This prevents splits from the cap flying about. So, on these early percussion guns, like yours, you will see that the striking face of the hammer is flat, so the flying pieces of the cap are contained by pulling down the “cap guards” to surround the primers. You can see these look like vestiges of the frizzen on a flintlock. 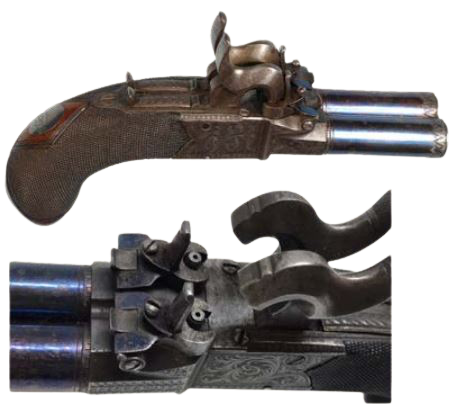 I have fired guns like these, and I have purposely left the cap guard in the up position in order to see if the cap really does split. It does, and sometimes small sections of the side of the cap fly off.

The tracing of the owner’s crest on the wrist escutcheon is almost impossible. But I sent your excellent photo to a friend who does this research as a hobby.

Here is his reply: The crest would be described this way: Initials E S around a sinister hand erect; couped at the wrist and appaume. This is the augmentation of arms for a Baronet with a crest out of a wreath of colours, a beacon fired (or inflamed).

This fits Sir Edward Dolman Scott of Hartington, Derbyshire, and of Great Barr, Staffordshire. His crest is described elsewhere as “out of a wreath of colours, on a mount vert, a beacon as fired up the ladder or” (vert, sa, ppr and or are the tinctures green, sable, proper [natural] and gold, respectively). Of course, colours cannot be determined on this escutcheon.

Sir Edward was created Baronet on April 30, 1806, and died June 1, 1828. His motto was “Regi fidelis petriaeque” Faithful to King and Country.

It is very rare to be able to connect one of these crests to a particular member of a family. My friend does this as a hobby, and he does not want any extra work. He told me that if I give his name to anyone, we are no longer friends. So, please don’t ask. MFC