Question: from Herbert J. via the Internet

I have the pistol shown in the attachments. On the right side of the slide is marked “Becker u Hollander Waffenbau Suhl.” The left side is “Selbstlade Pistole Beholla Cal. 7.65 D.R.P.” Also there is a stamping that I think must have been added later “POLITI (shield with crown) Nr. 8130.” There are some other marks you can see in the photos. What is this all about? 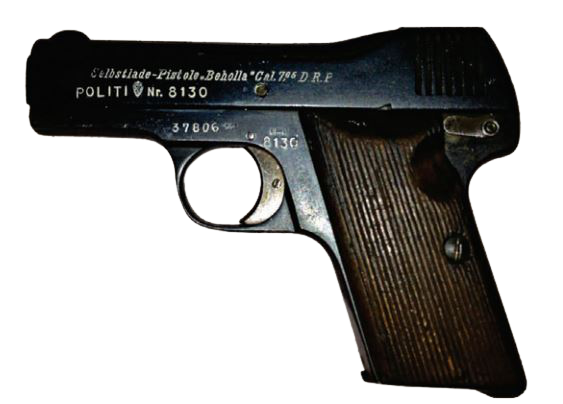 The Beholla (combination of the words Becker and Hollander) is a somewhat common German pistol of WW1. About 42,000 of these pistols went into German military service, and the proof that yours is one of those is shown by the German Fraktur letter D under a crown (lying on its side) just under the smaller number 8130 near the left grip panel. This D is a German Military acceptance stamp during WW1. The Crown over N is the standard Nitro proof mark found on both military and civilian pistols of that era. 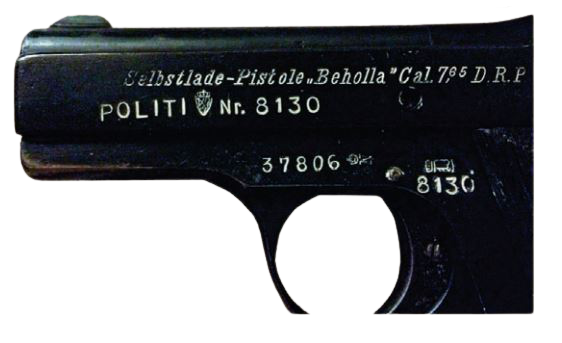 You are correct that POLITI and Nr. 8130 were added later, much later as it turns out. I called a friend, Alan Bell, very knowledgeable in this area. He explained that this marking is post-WW2 Norwegian Police.

The German Army occupied Norway from April 1940 to May 1945. After the surrender of the German Army, the Norwegian Government confiscated all of their small arms. Eventually, the weapons were sorted out, and some were re-issued to various Norwegian Government agencies. Your pistol was issued to the Norwegian Police Force and assigned a Police serial number, 8130, which they stamped on the slide and frame. There is a rampant Lion in the shield under the crown next to the word POLITI, this is the crest of Norway. So, your pistol has had a very long service life, starting with 1916-1917 until approximately 1978. MFC

I came across this weird gun in a local collection.  Wanted to see what you make of it. It is a .22 cal or 5 mm rimfire European pistol with an attachment that makes no apparent sense. 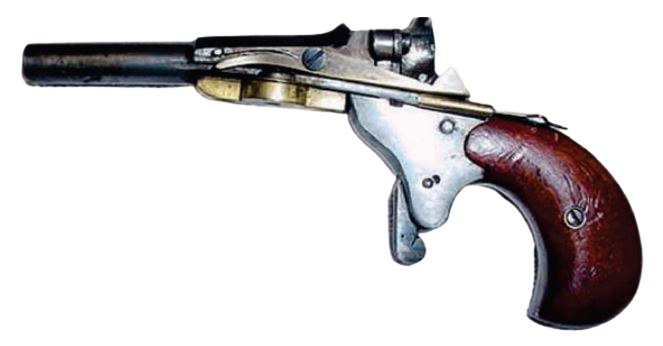 There is a side-swinging arm that pivots under the barrel.  When the gun is at full cock the arm can be swung forward and will latch in that position. Upon firing the arm snaps 180 degrees backward against the frame.  As you can see there is a wire device that looks like a retainer for something. 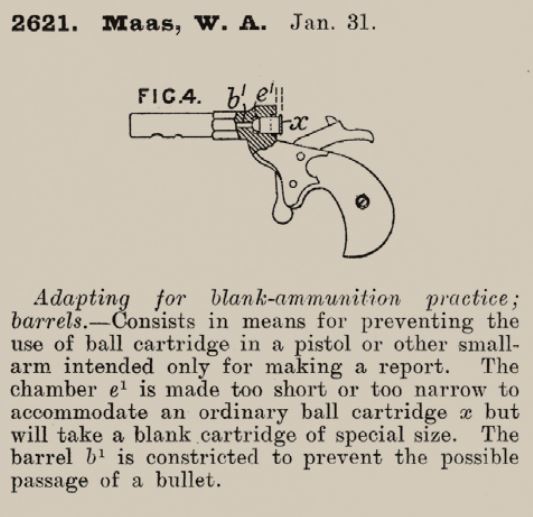 I think this must be a starting pistol or signal pistol of some kind. Consider starting a foot race, small boat race, etc., where the ambient noise in the stadium or outdoors might interfere with some of the participants hearing the report of the .22 blank cartridge. As the pistol is fired, the flag, which is set in the wire brackets, snaps back toward the shooter when the trigger is pulled.

I have attached a photo of a pistol just like this that I saw at a gunshow some years ago, and it has a small flag attached. It operated just as you describe. Also attached is a copy of British Patent 2621 of 1914 showing the design of the pistol such that a blank only can be fired, and not a cartridge with a bullet. I was not able to find a copy of British Patent 6254 of 1913. This blank fire-only supports the contention that this is a starting pistol or signal pistol. I suspect the earlier patent does not apply to the flag apparatus. This part appears to be an aftermarket add-on. 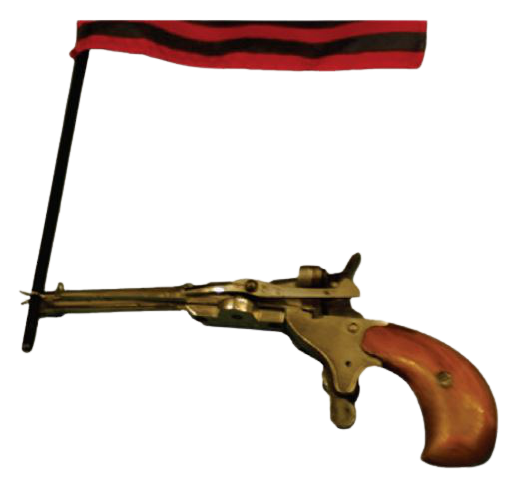 I notice that the usual hole under the barrel to relieve the force of the blank fire is plugged on your pistol. I wonder if this was done to redirect the pressure from the blank cartridge to operate or start the flag on its rearward movement? MFC

Question: from Tom in Ohio, via the Internet

Following is a brief description of the Colt New Line revolver I have. In the over 50 years I have been collecting, this is the only one I have ever seen. 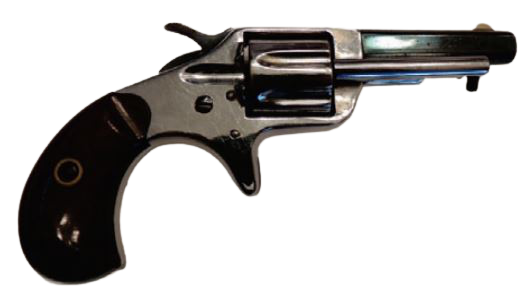 The serial number is 27603, which indicates 1877 manufacture.  I’m pretty sure it has been refinished. The odd thing about the pistol is the addition of an unloading attachment below the barrel similar to that found on the Colt Single-Action Army revolver.  The quality of the attachment would indicate that whoever is responsible for its manufacture would not have made only one. There must be other examples.

I will include some photos and will send more if needed.

I tend to think that the cartridge ejector rod mounted below the barrel could be the work of a single skilled gunsmith or machinist. I don’t think it was factory installed. The re-nickeling of the gun was undoubtedly done when the ejector rod and ejector rod housing was installed. If any of our readers has seen a similar installation, please let us know. MFC

I have this little .25 acp pistol with just one identifying mark on it. There is a triangle with a T in a circle within the triangle just above the front of the trigger guard on the left side. Maybe you can see it in the photo. The only other mark is the serial number on the left side of the slide. What is this pistol?

This pistol is the Soviet Russian Model TK 6.35 mm, where TK stands for Tula Korovin. Tula being the manufacturing arsenal and Sergei Alexandrovich Korovin the designer. Almost a half million TKs were made between 1926 and approximately 1974. The T in the triangle is one of the marks of the famous Tula Arsenal, about 120 miles south of Moscow. 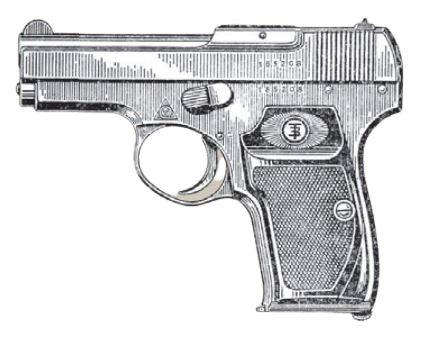 I am attaching a drawing from a Russianlanguage book by A.B. Zhuk showing your pistol with factory grips. I don’t know if the checkered wood grips on your pistol are replacements or standard on military-issue pistols. Although not officially adopted by the military, it is known that these compact pistols were issued to pilots, high-ranking officers, police, and others not in the front lines. MFC

Enclosed are photos of a “RICHARD” shotgun, 12 ga, Damascus barrels, outside hammers, 30” barrel. I don’t think this is one of the Westley Richards English shotguns, so I wonder where it was made and how old it is?

Since you have sent great photos of the marks on the breech and under the barrels, it is easy to say where this gun was made. The gun was made in Belgium, and was one of hundreds of thousands imported into the United States in the last half of the 19th century and the early 20th century. The name RICHARD was most likely used in the hope that the buyer would associate it with the higher quality English guns. We can learn a lot from the Belgian marks.

Starting from the bottom of the photo of the proof marks under the barrel: 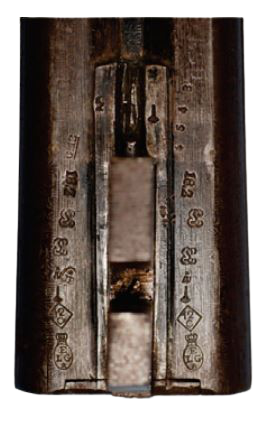 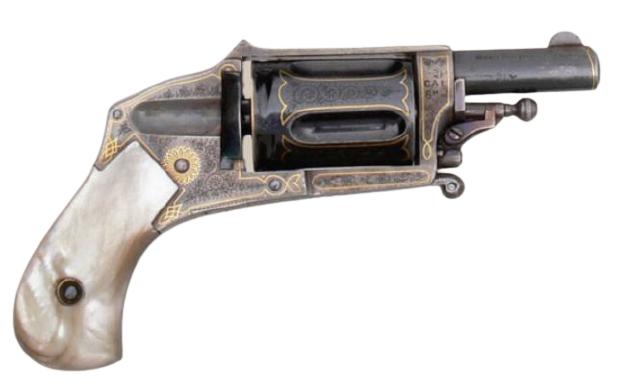 Question: from Frank in Texas, via the Internet

I have a very nice example of a European Velo Dog revolver, including a box of cartridges. It is marked “Manufacture Français d’Armes et Cycles de St. Etienne.” The long slender cartridge is 6 mm centerfire. Do you have any idea of the age of this revolver, and why these types are called Velo-Dog? 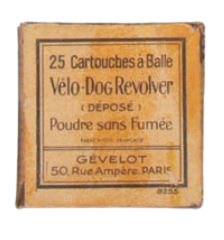 As to age, these Velo-Dog revolvers will commonly be found in Belgian, French and German arms catalogs from around 1900 to the mid-1920s. I have attached a page from a Belgian catalog of 1910. The name VeloDog was registered as a TradeMark in Belgium in 1904 by the firm of Galand, but the name was widely used in most catalogs for any gun fitting the general type. Generally speaking, a Velo-Dog revolver will chamber the long 5.5 mm to 6 mm (all the same cartridge, I think), center-fire; not as powerful as our modern .22 Long Rifle. They can be hammerless or with a hammer, will have a disproportionately long cylinder and a short barrel, will have a safety lever on the left side, will have a folding trigger, will be double-action, and usually very cheaply made. Your gun is an exception. 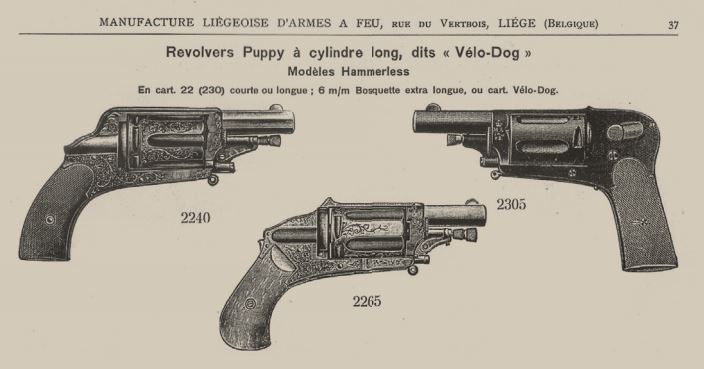 The name Velo-Dog seems to be a combination of the French Velocipéde (bicycle) and the English word Dog. Apparently, this was just what you needed to keep pesky dogs (and persons) from attacking you while pedaling for pleasure or to work. MFC