I have a British .22 Martini style single shot rifle, and it is made by the Birmingham Small Arms Company. It has their logo of three stacked rifles. Can you tell me anything about this logo? I can’t seem to get a clear photo of this tiny mark, but I’m sure you know the mark I mean. 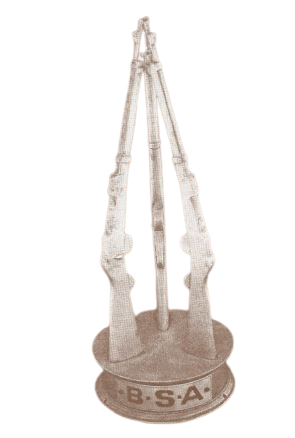 Yes, I know that famous mark. Rather than try to take a photo of one on my guns, I’ll reproduce an illustration from a 1910 BSA catalog and another from a booklet by BSA about their work during WW1. 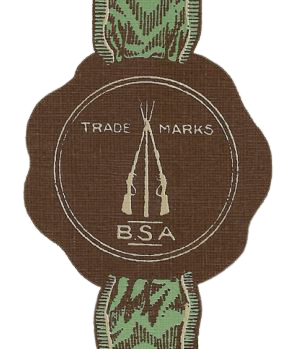 One of the illustrations is from the cover of the 1910 catalog and the other is of a statue shown in the post-WW1 booklet. A good history of BSA’s business timeline and of their logo is in Arms & Militaria Collector (Australia), Vol. 3, No. 3, Issue 11, 1997, by Barry Temple.

BSA was formed in 1861 by a consortium of Birmingham gun makers with the intention of pooling their resources to build a factory to manufacture firearms by machinery. It is not known exactly when they started using the logo of three piled rifles. The statue of the three rifles probably dates from 1897 at the earliest. Interestingly, the three guns are the Martini-Metford Rifle, Mark I pattern, a rather rare firearm. You will notice in the illustration taken from the cover of the 1910 catalog that the three rifles have their bayonets installed. This is the form usually seen stamped on firearms. MFC

Question from jerry.girard1@yahoo.com in Pennsylvania

On a visit to a long time antique gun collector, my son and I were shown this John Krider pistol. We looked at each other and at the same time said “Wow.” This pistol had the “Wow” factor, the result of its unusual construction. Its use would have been intended for accuracy, equipped with not only normal front and rear sights, but with those sights able to flip up to become long range sights, the front sight hooded and the rear sight adjustable for yardage. The muzzle was fitted with a false muzzle and bullet starter. The collector knew of no other John Krider pistol like it. He purchased the pistol many decades ago and had no background information. 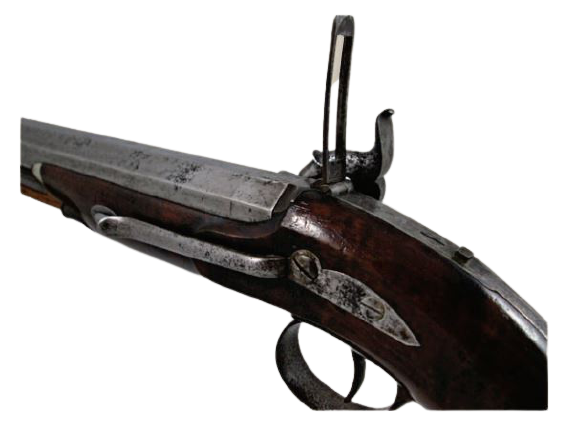 John Krider was established as a gunsmith in 1836 in Philadelphia after finishing his apprenticeship with gunsmith Prosper Valley. The Krider shop was located on the North East Corner of Second and Walnut Streets in Philadelphia’s “gunmaker’s row.” `The building was built by Edward Drinker in 1751 and is currently one of America’s finest restaurants, Old Original Bookbinders. After the Civil War, John Krider opened The Sportsman Depot selling guns, shooting supplies and fishing tackle including Krider fishing rods.

An Internet search for information on this pistol resulted in a possible lead. John Krider was listed in Philadelphia and Its Manufactures: A Hand-book of the Great Manufactories (1867). Within the report was my lead. “He made Pistols for Generals Henningsen and Walker that would hit a horse at nine hundred yards.” 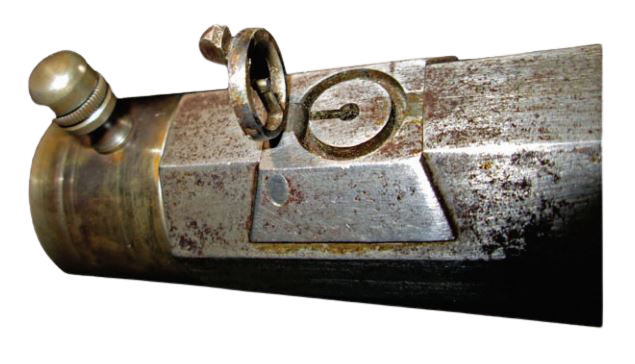 Charles Frederick Henningsen (1815-1877) was an English soldier of fortune and a U.S. citizen. He authored many books based on his experiences in Hungry, Russia and elsewhere in Europe. A trip to the Hagley Museum in Delaware where the Valley, Krider and Siner business records from 1817 to 1939 are archived indicated that Henningsen visited and purchased supplies from Krider from 1846 to early 1856. Colonel Henningsen left Philadelphia and joined General William Walker in Nicaragua where he was promoted to Major General, later returning to fight for the Confederacy in the Civil War. A June 28, 1853 entry in the shop “day book” for Col. Henningsen lists a number of items including a repair to a pistol and ball starter. While further research of the archived records is needed, perhaps that entry refers to my pistol described as follows..

Marked “Krider” on the back action lock

and “Philadelphia” on the barrel.

Photos of the pistol are provided and the reader is encouraged to contact me with any information regarding this pistol or with any knowledge of Charles Henningsen’s publications on small arms and their improvements. Jerry.girard1@yahoo.com

During several conversations with Mr. Girard, we learned a little more. It seemed to me that this long-range gun should have a shoulder stock. There is no obvious place to attach a shoulder stock, but upon careful examination, Mr. Girard found a countersunk screw in the front of the grip strap, passing through the handle, and flush with the back strap. This screw may be a plug for the place a shoulder stock would be attached. There is a photo of a similar arrangement for a shoulder stocked Morgan James pistol that is very similar to his Krider.

What we are seeking is more information about Mr. Girard’s pistol. This is an outstanding firearm, and some of our readers must have seen it before. Can anyone trace the provenance for Mr. Girard or supply any additional information on this gun or Col. Henningsen? MFC 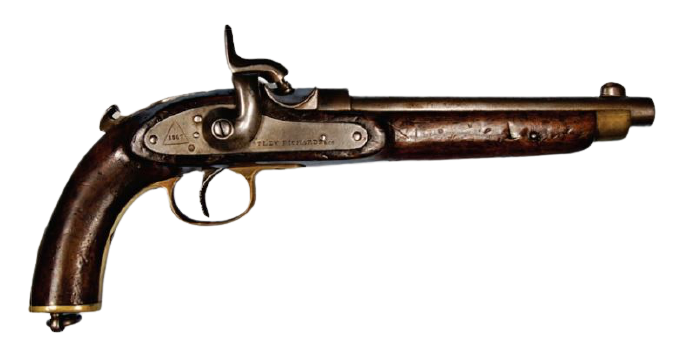 I have this large breech-loading percussion pistol and would like to know more about it. The barrel is about 8” long and about .45 caliber. A lever is raised at the rear and a paper cartridge can be inserted and then it is ignited by a percussion cap on the nipple. It is marked “Westley Richards Patent” on the lever. Whitworth Patent .451 and .475 on the barrel, and Westley Richards Co. 1867 on the lockplate. FA 1873 is stamped in the wood on the left side. On top of the receiver is “use 25 Grains.” I have heard this is called a Monkey Tail.

Yes, this system is called Monkey Tail by collectors because, when the lever is up, it somewhat resembles the upheld tail of a Monkey. This system was patented by Westley Richards Company in England in 1858. A large quantity of rifles and carbines was purchased by the British Government. 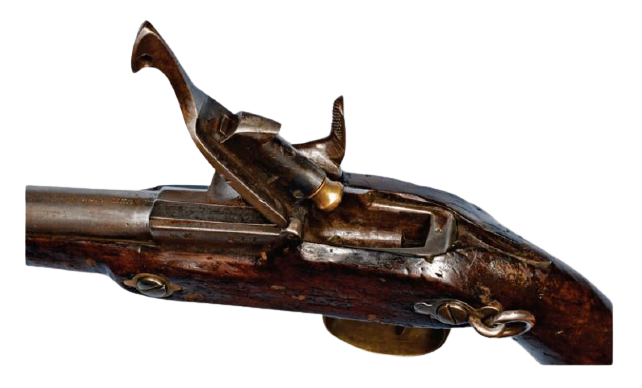 But the pistol you have is from the 1867 Contract for Portugal. The government of Portugal ordered 2000 carbines for their Cavalry, 8000 short rifles, and 1000 pistols.

The pistols are found with and without a ramrod. The pistol with the ramrod was used by the Second Cavalry Regiment, the Queen’s Lancers based in Lisbon, and the model like yours was used by the First King’s Regiment and some other units.

The .451 on the barrel is the bullet diameter and the .475 is the chamber diameter, with 25 grains being the powder charge. The FA 1873 is the national armory in Portugal, Fabrica de Armas, and 1873 is the date of a possible refurbishment.

As you mention, this system, called “capping breech loader,” is meant to be used with a paper cartridge ignited by a separate percussion cap. These guns can also be used as muzzle loaders. MFC

I have a Porter Revolving Turret rifle, and I have a question about the priming. I have seen several mentions that these rifles used a system called Pill Lock or Pill Priming. I can’t figure how this works, or even where to put the pills. Can you explain this to me?

Although many references list the Porter Rifle as using pill priming, it is not true. To quote Norm Flayderman, Flayderman’s Guide to Antique American Firearms, 9th Ed, page 716, “Porters are not pill lock ignition as invariably described.” George Moller wrote a fourteen-page article on the history and workings of the Porter Turret rifles in the August 2008 issue of The Gun Report magazine. Moller describes the prototype Porter rifles first tried by the U.S. Army as having a

canister on top to dispense the powder and balls down into the turret. The Army requested one of the guns to have a Maynard tape priming system and another to have a “pill primer.” Moller believes this pill primer would have been the Lawrence patent disk primers as used on Sharps carbines. This single example might be the source of the misunderstanding about the ignition system on the Porter.

Another cause of the misunderstanding might be that the common models encountered by collectors do not have the “normal” nipple and cap system. I have attached a photo of a Porter in my collection to show the unconventional priming method. These guns have a side hammer with a very long nose. To prime the gun, first pull the side hammer to full cock. Then rotate the circular cover down to expose a clockwork mechanism. Rotate the follower and place the percussion caps in the groove mouth upward. See photo with five caps in place.

Here is Moller’s description after inserting the caps into his rifle: “. . . when the trigger is pulled, the falling hammer’s long nose enters the percussion cap’s open end, pushes the cap through a hole in the rear of the magazine, and detonates the percussion cap against the side of the receiver. The ignition spark passes through a small vent in the side of the receiver and a corresponding vent in the cylinder wall where it enters the chamber and ignites the powder charge. The percussion cap expands on detonation and falls away as the hammer is again cocked.”

The last variation of the Porter rifles did have conventional nipples on the side of the turret.

Needless to say, this very complicated rifle was not judged suitable for use in military situations.

Other than the prototypes, the Porter rifles are believed to have been made by George Foster in his shop in Taunton, Massachusetts. He declared bankruptcy January 1, 1854. Moller thinks that all the Porter rifles were probably made during 1852 and 1853. MFC