The attached photo of a 48-shot revolver has been flying around the Internet lately, see the color photo attached. Can you tell anything about it? 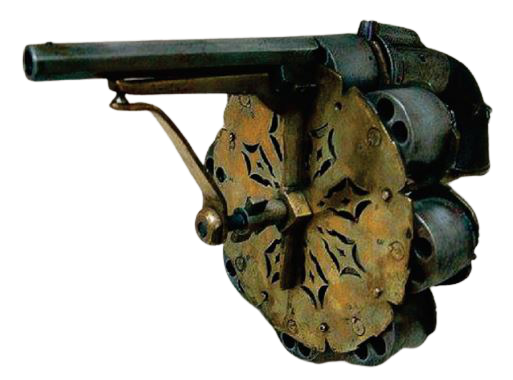 This percussion “revolver” was patented in England by Joseph Enouy on June 14, 1855. His patent specification reads “Two or more cylinders are mounted in a rotary framework and are successively brought into the operative position ready for discharge, by means of wheel gearing, acting independently of the breech action which revolves each cylinder when in place and cocks and fires the arm.” The patent illustrates a two-cylinder example: 12 shots, and a six-cylinder example: 48 shots. The revolver pictured here is the 48-shot model. The large array of cylinders was removable, so the assembly could be placed on a table and loaded and capped. Notice the stud on the back of each 6-shot cylinder. It must fit in a cavity of the receiver and be turned by cocking the trigger. I wonder how long it would take to pour a charge of powder, ram in a ball, and cap the nipples for 48 loads? Can you imagine the excitement if there were a flash-over and multiple cylinders ignited? MFC 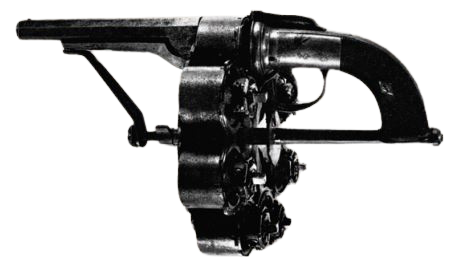 The revolver pictured here is the 48-shot model. The large array of cylinders was removable, so the assembly could be placed on a table and loaded and capped. Notice the stud on the back of each 6-shot cylinder. It must fit in a cavity of the receiver and be turned by cocking the trigger. I wonder how long it would take to pour a charge of powder, ram in a ball, and cap the nipples for 48 loads? Can you imagine the excitement if there were a flash-over and multiple cylinders ignited? MFC

Enclosed is a photo of a weapon of some kind. It has touch holes and projection holes. I think it is Chinese and maybe it is a flamethrower or torch of some kind. Have you seen any of these? 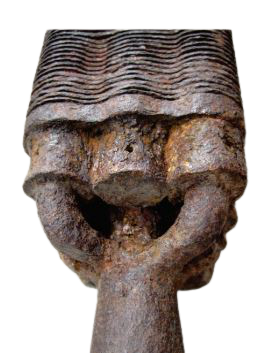 Yes, I have seen two of these last May when I visited

TO MOGHUL and ISLAMIC and NATIVE WEAPONS OF

COLONIAL AFRICA. Tony had two of these devices, and I took

a photo of them. The photos printed here show Mr. Rausch’s

mounted on a nice board. The other three photos are of the two

Mr. Tirri thinks they might be devices to shoot out flames— quite an intimidating weapon to those familiar only with swords and spears. He modified one of his to shoot BBs, but the power was very weak. 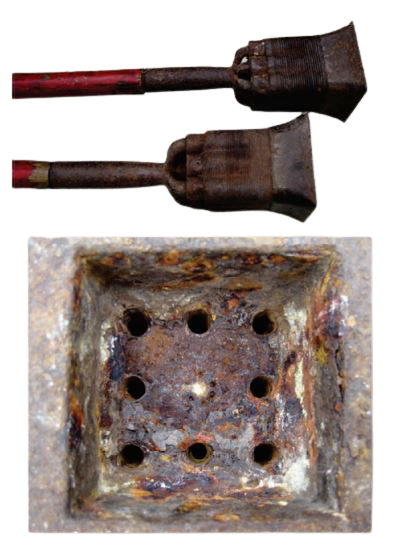 The Rock Island Auction Company's Regional Firearms Auction of June 28, 2013 had several of these in Lots 188 through 194. MFC 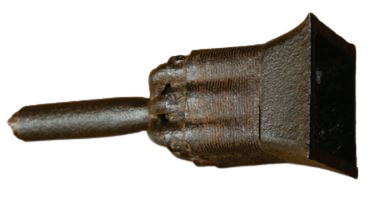 Question from: Alan Merz via the Internet

I have the pistol shown in the photos attached. There is not much information on the pistol other than the maker’s name and E7 39 with a lion between. What is this large pistol and what caliber is it? 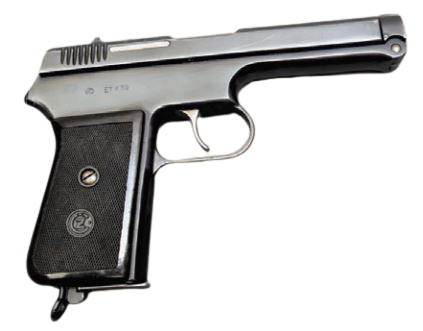 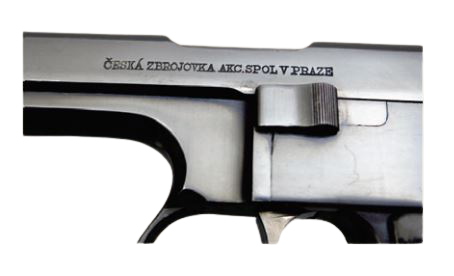 This is a Czechoslovakian CZ Model 38 that was manufactured for the Czech military just prior to the German invasion during WWII. The pistols were subsequently seized and utilized by Nazi forces. The vz. 38 is a rather unique design, first due to the fact that it is a double-action only pistol and secondly by the rather unusual hinged barrel and frame arrangement. By pushing forward on the frame-mounted latch, the slide is released from the frame and pivots upward, along with the barrel. The slide is then simply pulled off of the barrel, which remains attached to the frame at the front.

The caliber is .380 acp. The double-action trigger pull is very long and stiff, and the hammer returns to the down position after each shot, so you have the long double-action pull for each shot. 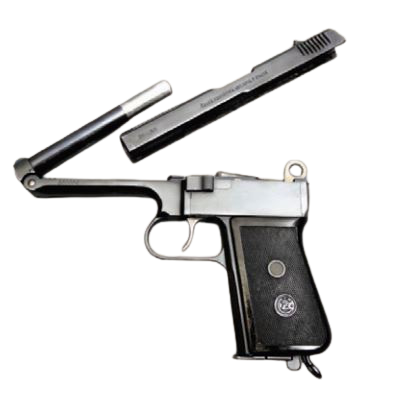 The Lion is the Czech acceptance mark and will be found in front of the rear sight, on the barrel visible through the ejection port, and on the date mark as you mentioned. Very occasionally these pistols will be found with German military marks, and sometimes the SA mark of the Army of Finland. MFC

Question: Danny from Houston via the Internet

We just received this interesting .58 caliber musket with a push-up action just as seen on the Civil War Smith Carbine. The breech is engraved “Gilbert Smiths Patent 1857 / address / Poultney & Trimble Baltimore Md.” The Civil War Smith was .50 caliber and of course, was a carbine. Maybe this was a patent model?

I don't think this can be the patent model because Gilbert Smith didn't have the push-up lever at first. In Smith's patent 17,644 of June 23, 1857, he opened the gun by pulling up the back end of the locking tab on top of the gun. When he assigned the rights to Poultney & Trimble, Thomas Poultney asked gunsmith Charles E. Sneider to work out a better way to open Smith's gun. Sneider came up with the push-up lever. He patented that on March 20, 1860, patent no. 27,600.

But in his patent of 1860, the lever was cruder than shown in this gun. The push-up lever on this gun looks just like the production run in the Civil War carbines. I have an early Smith carbine, serial 8443, and my push-lever looks exactly like this one. 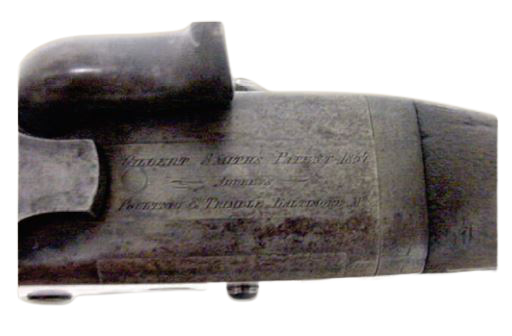 Perhaps this rifle was made for trials for the U.S. Infantry or maybe a foreign government? This is another gun that might yield more information if I could find a record of the guns submitted in the 1860 Army Trials.

An early Flayderman sales catalog had a .36 cal. Smith with a 24" octagon barrel, so there were some variations. By the way, Charles E. Sneider patented a very interesting 14-shot, .22 caliber revolver shown in Firearms Curiosa, pg. 73. MFC

I have an old double-barrel pinfire ten gauge shotgun that I enjoy shooting here in Fairbanks. It is a large gun: 40-3/4” barrels and almost 13 lbs in weight. There are some names on the gun that I cannot decipher. Enclosed are rubbings. There is a mark on the water table that appears to be a palm tree in an oval. Maybe you can make something out of them. 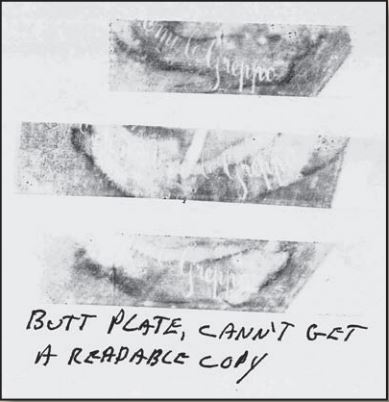 The rubbings are very good quality. The maker of your gun is Pondevaux & Jussy in St. Etienne, France. They were founded in 1837 and had patents issued in 1853 for improvements to the Lefaucheux system. 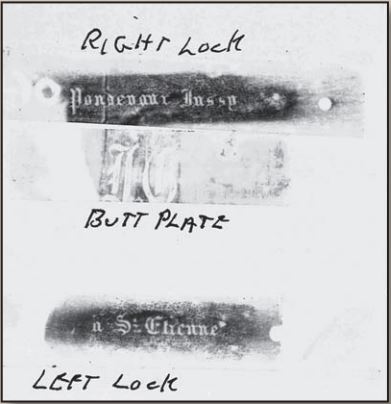 Pondevaux & Jussy exhibited their guns in the Paris Exhibition of 1855 and were awarded a medal First Class. They also exhibited in the London Exhibition of 1867. The “palm trees in an oval” is the definitive proof mark used at St. Etienne from 1856 to 1886. The name on the buttplate tang looks to be Greppo. There was a “noble” family in the late 1800s with that name. The prominent member was Jean-Antoine Greppo, but he died in 1853. Perhaps a member of this family once owned your shotgun? MFC

Question: Mike in Houston via the Internet

I recently acquired this capping breech loading rifle. You can see from the photo that it is marked W.H. Smith, Pat’d Dec 10th 1861. I have found a William H. Smith as a New York importer and another William H. Smith working for Billinghurst in New York, but this doesn’t seem to be the kind of gun associated with those names. I wouldn’t be surprised if it was a rifle made with the hope of getting a Civil War Contract. Maybe it was in the Army Trials? 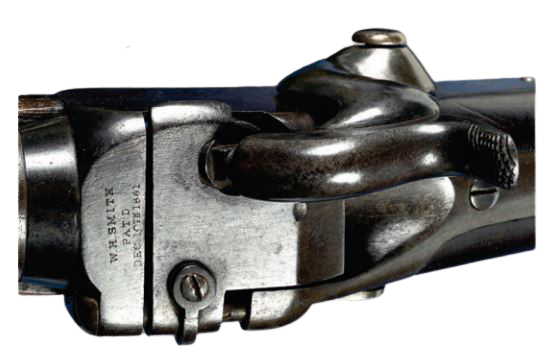 I have searched the Patent Records and found that this maker is Wilson H. Smith. He patented this rifle December 10, 1861, patent no. 33,907. He also has patent 37,260 of December 23, 1862, for an artillery projectile and patent no. 43,957 of August 23, 1864 for an improvement in breech loading firearms. Smith lists himself as being from Birmingham, County of New Haven, State of Connecticut. From the dates, it seems you must be correct that Smith was looking for business with the U.S. Government during the Civil War. In Frank Sellers’ book, AMERICAN GUNSMITHS, he says that the Sharps Rifle Company made this gun for Smith. You can see the similarities. I asked George Moller, author of a three-volume set on American Military Arms, and he replied that he doesn’t have much information on prototype or experimental arms. Ordnance Boards were apparently suspended during the early years of the Civil War, and the Boards that met in 1864 and thereafter were primarily concerned with cartridges and cartridge breech loading arms. We would like to hear from any reader who can supply additional information. MFC 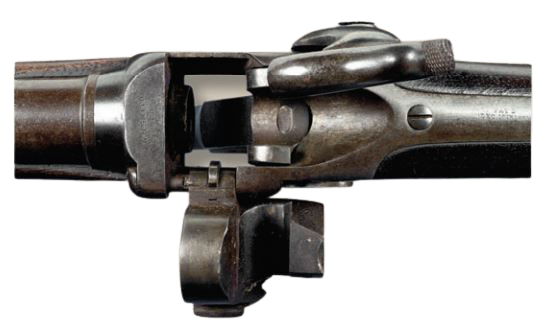