Question: via the Internet from Canada 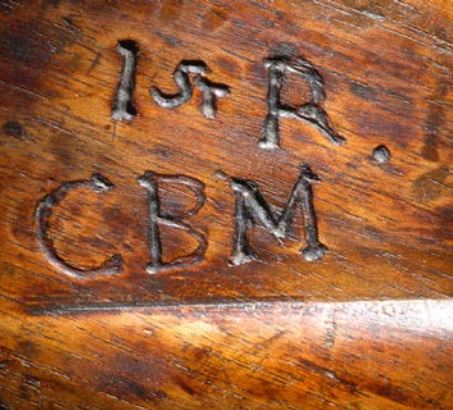 I have this musket, a Brown Bess, India Pattern, which seems to be a standard musket for British Infantry around 1800, plus or minus. The lock has TOWER and the Royal Crown over GR. What I’m interested in is the marking on the buttstock 1 st R CBM. Can you identify this mark?

Well good news, you have a musket from the Maritime Provinces of Canada. The mark is that of the 1st Regiment of Cape Breton Militia. Here is an excellent article by Dr. Ross MacInnis about these Nova Scotia muskets on page 44 of the Canadian Journal of Arms Collecting May 1995. You can buy back issues of this magazine at http://www.armscollecting.com. 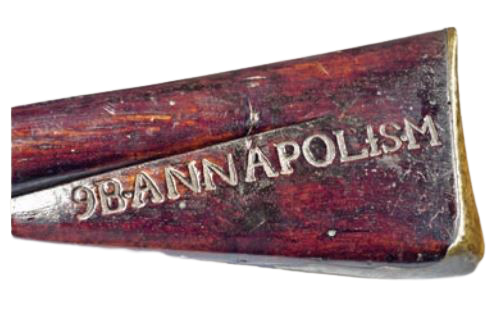 The Nova Scotia Militia Act of 1795 required all arms to be branded on the side of the buttstock with the county name and Me India Pattern muskets were issued between 1808 and 1820. Dr. MacInnis calculates that the 12,000 Militia men had about 3,000 Short Land Pattern muskets, 5,000 India Pattern, and a couple of hundred Baker ries by 1814.

In 1852 the Provincial Assembly did a survey and found 7,000 muskets and 400 ries held by the now defunct Militia. All were condemned and ordered sold at public auction, but the British Government forbade the sale. In 1855 all unserviceable arms were to be sold and those still serviceable were to be converted to percussion.

I have one of these Nova Scotia Militia muskets in my collection marked 9B ANNAPOLIS M, i.e., 9th Batt. Annapolis Militia. I’ll include a photo here. Compare how professional the stamping is on my ANNAPOLIS musket as compared to the rather crude hand-carved Cape Breton mark. Dr. MacInnis writes about Cape Breton Militia, “At one point the ocer’s mess appropriated the branding iron to mull their punch and it was not available for branding. During that period a skilled armorer carved the marks on a few stocks.” By the way, the Nova Scotia muskets from the counties of ANNAPOLIS and CUMBERLAND are occasionally misidentified as being guns from Maryland. MFC

Question: anonymous via the Internet

I have an FN Browning Model 1900 .32 acp pistol that is just a standard Belgian Model 1900 except that it has two crossed ries and an additional number above the le grip. What is the meaning of this? 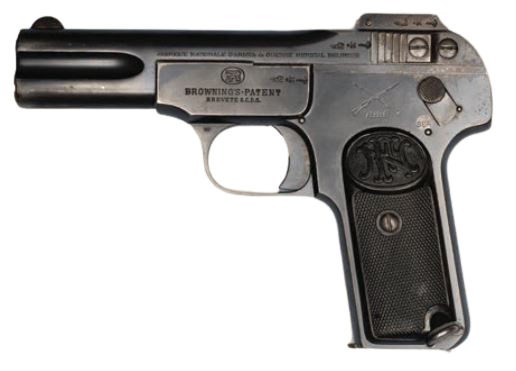 You have a pretty rare WW1 pistol made for the Императорская Николаевская военная академия, that is the Imperial Military Academy in the name of Czar Nicholas I. is was in St. Petersburg, and was one of two elite ocer’s military schools in Russia. It is sometimes called the Imperial General Star Academy

academy, established in 1832 in St.Petersburg. It was rst known as the Imperial Military

Academy (Императорская военная академия), then in 1855 it was renamed Nicholas

These pistols were for the graduates of these academies. e majority were awarded between 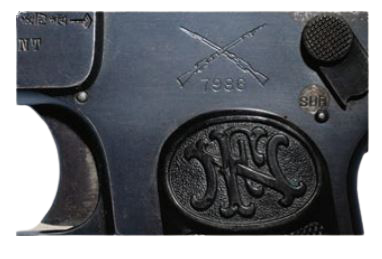 Please see the attached photos of my Jäger Pistole. It seems to be .32 acp (although I haven’t tried it). It looks pretty crudely made and kind of ugly with the slab sides. Can you tell me more about it? 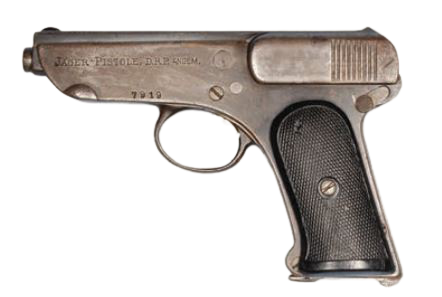 You have a German WW1 sidearm. Several makers of small semi-auto pistols churned them out, mostly to be sold to ocers for personal sidearms. As you can imagine, a great many of the small concealable pistols made it home with returning Doughboys. 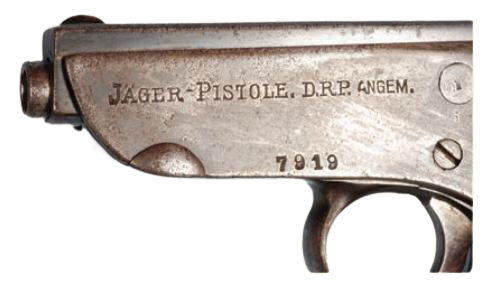 Your pistol was manufactured by Franz Jäger and Company in Suhl between 1914 and 1917. These can be identified for military usage by nding the Military Acceptance stamp. In this case, it is a crown over an M, and is stamped twice just above the screw head above the trigger on the le side. These marks are very tiny. Jan Still, in CENTRAL POWERS PISTOLS writes on page 205: “About 13,000 Jägers were manufactured and approximately 2,000 were Imperial stamped.” 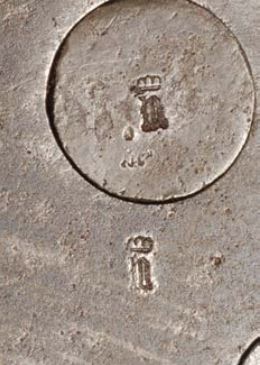 Although it looks like a cheap sheet-metal piece, it is made from steel stampings, was streamlined, and its design was ahead of its time. The Jäger factory continued aer WW1 making high quality sporting arms. It closed in 1959 with the death of Franz Jäger. His son, Paul Jaeger moved to the USA in 1927 and operated a high quality sporting arms company specializing in custom-built ries. MFC

I have seen a nipple bolster with a square sha on the outside as shown in the attached photo. Why would this nipple bolster have this long sha sticking out on the side? 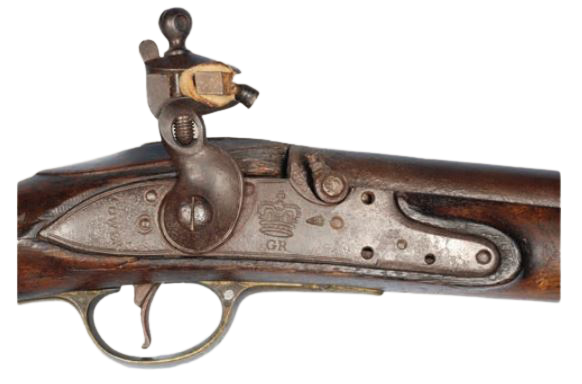 I have seen an exact duplicate of the item you sent. In fact one of the photos I use here is of the one I saw at the home of Jim Buchanan in England. Jim told me that this is the way these were constructed for use during a conversion from flintlock to percussion. A threaded hole would be bored in place of the touch hole on the barrel of the gun, and the bolster with the nipple would be screwed in to just the right depth and angle by using a wrench on the square shaft. The sha would be ground o and the outside of the bolster polished, and probably have a hole drilled through from the side and plugged with a screw, so that the ring channel could be cleaned by temporarily removing the plug screw. 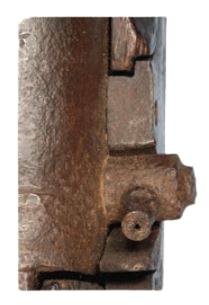 While reading ENGLISH PISTOLS AND REVOLVERS by John Nigel George, I came across a discussion of this procedure (page 116) and learned that at the beginning of conversions in the early 1820s, the idea of the clean-out screw was not yet thought of. So, the gunsmith let a nub of the sha exposed and provided a small spanner wrench with the gun to enable the owner to remove the bolster and nipple for cleaning of the ring channel. I happened to be with James Hanson of the Museum of the Fur Trade and asked if he had ever seen such a nipple bolster with a protruding sha. He has seen such guns, but only a very few. 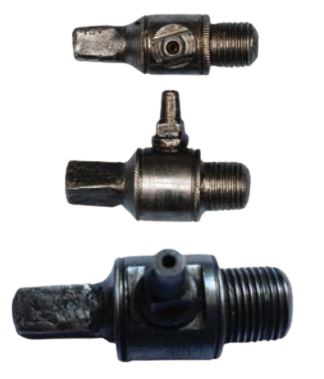 Three of these conversion nipple bolsters are shown here. One has an led on the round body and the nipple inserted there. e other two do not have this extra step. ese are different sizes to be used according to the size of the rearm. Attached is a photo of a Brown Bess I just bought from www.Denner.ca and you can see the stub of the sha crudely cut o near the bolster. It is a very primitive conversion. MFC

In the last issue of Arms Heritage Magazine you showed the rare disassembly/assembly tool for the Winchester Model 1895 Military Musket. How would you like to see a couple even more rare Winchester take-down tools? 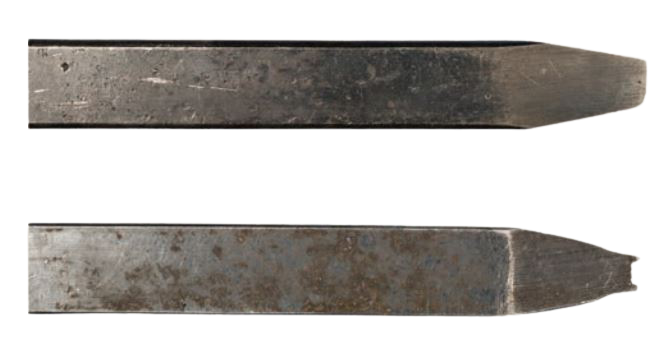 Jim Shaer is co-author of Gun Tools, Vol. 1. He has a very large collection of take down tools for military ries, and my answer to his question is “Yes.” What have you?

He sent photos of two tools with an exceedingly long arm. e tools look to be alike at rst glance, so I’m just printing one of the overall views. Here is a close-up of the tip of the long arm on each tool. You can see that one is a standard tip for a slotted-head screw. The other has two projections for a screw with two small holes in the head.

Jim thinks they are for undoing the screw inside the buttstock that holds the stock to the receiver on the Winchester Semiauto ries Models 1905, 1907, and/or 1910. the buttplate would be unscrewed and the long end of the tool would be inserted in the hole in the buttstock to unscrew the receiver screw there was some limited use of these guns in our military and especially in the French Air Corps, so maybe these tools were specified in one of the contracts. It would be interesting to know if the length of the tool is just correct to insert it into the hole in the buttstock when the two other legs are folded inwards. then the user could fold the two small screwdrivers outward and use them as a handle to unscrew the buttstock. Of course, that is assuming there is a trap door in the buttplate. You wouldn’t want your screwdriver to be under a buttplate that had to be unscrewed for access. If any of our readers has seen one of these models with a military-style, trapdoor buttplate, or has other information on these two tools, please let me know. MFC

I have this gun, a short rolling block .30-30 carbine. On top of the barrel is marked “Gun Parts Corp. / West Hurley, N.Y.” And on the left side of the action is “STAR R0550. One side of the barrel is ``.30-30 CAL.” e action looks and functions just like a typical old-style rolling block rie. I realize the Gun Parts Corp. is also known as Numrich Arms Company, but they weren’t any help in identifying this gun. 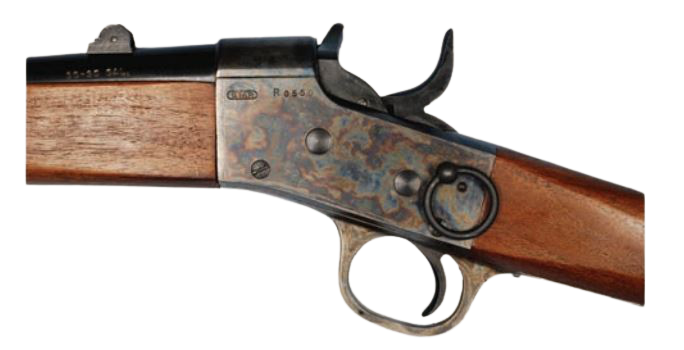 I hadn’t seen one of these before, so I called George Layman, author of Remington Rolling Block Military Rise of the World. Here is his reply: “e Star rolling block carbine’s rst appearance in the Garcia catalog appears to be in late 1970 and remained on the market until around 1975 until FIE exporters and Garcia had some sort of falling out and the carbine disappeared from view about that time.....there also was a legal question between Garcia Distributors and FIE which put all of the uncleared for-import Star carbines in New Jersey and other Garcia products into a pre-import bonded warehouse where they remained and nally sometime in the 1990s were released, but had to be stamped with import marks to conform with current laws. Apparently Numrich (Gun Parts) alone won a bid on the lot aer the US govt. released them, the earliest Gun Parts ad I recall was in 1989 or 1990.” 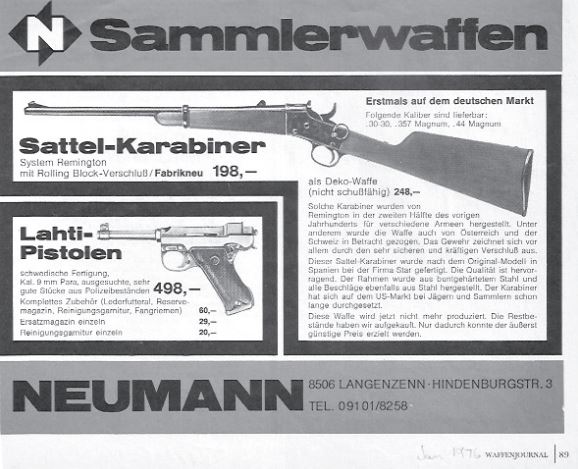 George is going on memory here, so the above is not verified. Meanwhile Jim Hayden, bookseller, found an advertisement from the January 1976 issue of the German gun collector’s publication Deutsche Waen Journal showing this gun for sale in calibers .30-30, .357 Magnum, and .44 Magnum. e ad mentions that these guns are made by the rm STAR in Spain. If any reader has additional information, please let us know. MFC