I’ve seen a lot of Dreyse needle-fire single shot pistols, but not seen a revolver like this. Can you tell me more? 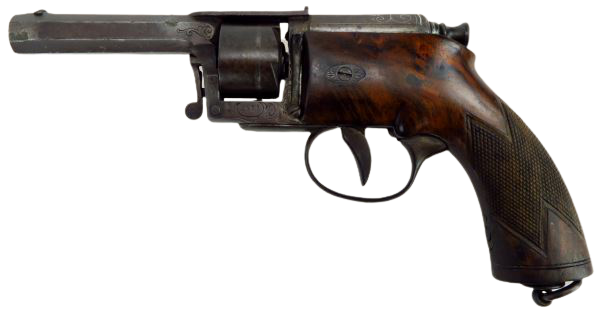 This German revolver by Nikolaus von Dreyse is a .38 caliber, double-action, front-loading, needle-fire system revolver. These were first introduced about 1860.

Paper cartridges with the priming compound fixed just below the lead bullet (and forward of the powder load) would be pushed into the cylinder from the front. Later versions of this revolver had a hinged loading lever affixed just about where you see the words “Grand Pulver” on the right side of the receiver.

When the trigger is pulled, a long pin (the needle) snaps forward and detonates the primer at the base of the bullet, and immediately returns to battery for the next shot. 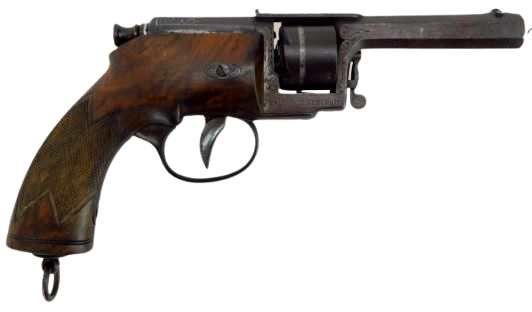 This Dreyse Zündnadelrevolver was a favorite of German Officers in the Franco-Prussian War of 1870/71. Those marked with a Crown over RC on the left side in front of the cylinder were issued to Prussian Military Police. A Prussian document of 1868 mentions these as Cavalry Officers’ Pistols. However, this gun shown is very likely a civilian version. The military revolvers were marked 0.39, roughly equivalent to .40 caliber.

These numbers, 0.35 on your revolver and 0.39 on the military revolvers are in a pre-1872 German system of measurement, the Prussian Zoll. 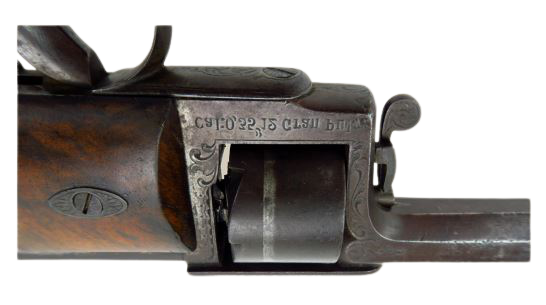 Question: from Fred Novy, via the Internet

I’ve got a German DSM 34 small bore training rifle by Mauser. I know what this gun is, but there is a stamp in the slot cut into the buttstock for the sling that is puzzling. It is stamped DRP Rgsb. Usually, the DRP mark means Deutsches Reichs Patent, but that doesn’t seem to be appropriate in this case. Have you an idea of its meaning? 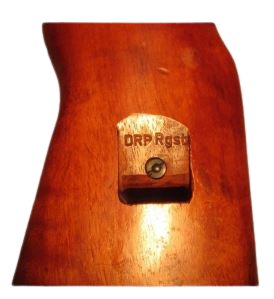 Well, I also thought it generally stood for the patent mark. And I agree, you wouldn’t expect it to be placed on the buttstock, and I don’t know the meaning of Rgsb. So, I took advantage of my membership in the German Gun Collectors Association ( www.germanguns.com ) and posed the question. 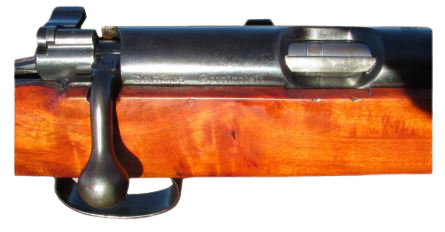 Axel Eichendorff replied that, yes DRP is a common abbreviation for the Patent mark, but in this case it stands for Deutsche ReichsPost, and in particular, the post office department in Regensburg (Rgsb), a city in Bavaria. From the 1920s the German postal service had its own armed guard service. In 1933 the standard G-98 Mauser was modified for the postal guards, and it was known as Gewehr für die Deutsche Reichspost. This DSM Mauser is a training rifle adopted in 1934. So, the DRP Rgsb is the ownership mark of that Postal Department. MFC 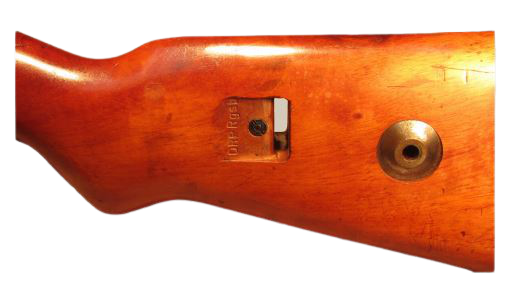 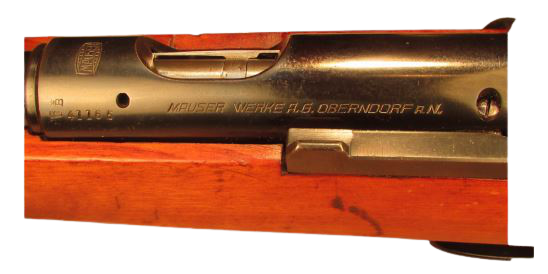 Question: From Art Pohl, via Internet

This little pistol in the attached photos belonged to my grandmother who emigrated from Germany to Spokane, Washington. The family lore is that she carried this in her hand muff. Can you tell me more about it? 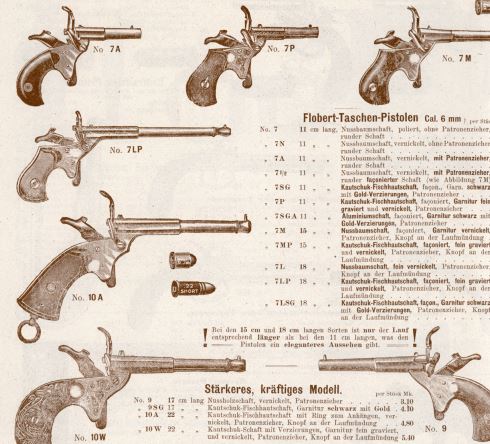 These, and other small pistols, are often called “muff pistols.” So, your family tradition is correct. These are called Flobert pistols after the inventor of the cartridge, Louis Nicholas Auguste Flobert. Flobert was born in Paris in 1819 and died near there in 1894. 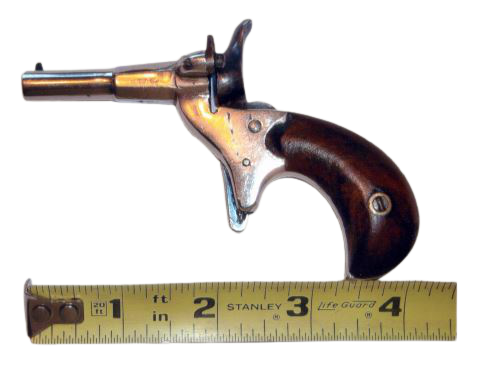 Flobert invented the small rimfire cartridge and a great variety of pistols and rifles for the many calibers. Generally, the guns were inexpensive and the cartridges were very low power. His first gun used just the weight of the hammer as the breech block. The next improvement (1855) was a rotating breech, as shown with the side-rotating breech plate on your pistol.

In 1849 he patented what can be described as a large percussion cap, some added black powder, with a round ball in the mouth. This evolved to the rimfire cartridge that is most abundant in .22 caliber today. The catalog page shown is from a 1902 German firearms dealer catalog. MFC

What can you tell me about this interesting revolver marked H. Harcourt, Sudbury?

Mike and Danny Clark certainly get some interesting guns in their Houston shop! Henry Harcourt, 2 Friars St., Sudbury, Suffolk, England, was only the retailer of this pistol made by Thomas Pennell in Birmingham, England.

This is Pennell’s Model 1853 percussion revolver, 54 bore (caliber about .44), six-shot , self-cocking (doubleaction), hammerless revolver described in his patent of April 23, 1853.

Well, it is not exactly hammerless, the hammer/striker is concealed in the shrouded part seen in the photo marked “Patent.”

Thomas Pennell’s patent No. 1038, claimed the feature of completely encasing the lock mechanism and hammer; the method of attaching the barrel by a swiveling bolt; and the detached rammer. Of the twenty

examples of this revolver that I have found in auction catalogs and in magazine articles, only two still had the detached rammer with them. I have attached a clip from the patent drawing showing how the rammer hooks under the barrel and rams the ball in the lower chamber of the cylinder. It seems that Pennell never completed the submission of this patent.

A cased set that I found with a rammer shows the pivoting rammer to be about 5” long. About half the examples had a belt hook. 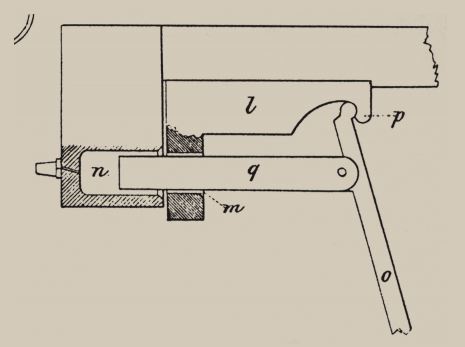 I found twenty examples of Thomas Pennell’s revolver and two examples of this system on a rifle. All twenty of these guns have a different retailer’s name engraved on them! Why no duplicates? Did Pennell have a supersalesman who sold one revolver to each gun shop? Did he give a special price on the first, but then get no reorders?

Well known British collector, Bill McCarthy, adds the following information: Pennell’s patent application was not granted. He provided a provisional specification and got a provisional patent. This was free and fixed the start date of protection. He then had 6 months protection after which he was required to provide the full specifications and pay the £50 fee.

At the end of this period he did not pay the fee and the protection lapsed. He either made all his guns in this six months period, when the ‘patent’ marking was legitimate, or more likely, he went on using it afterwards as well.  This, of course, explains why he did not number them, royalties were not payable. 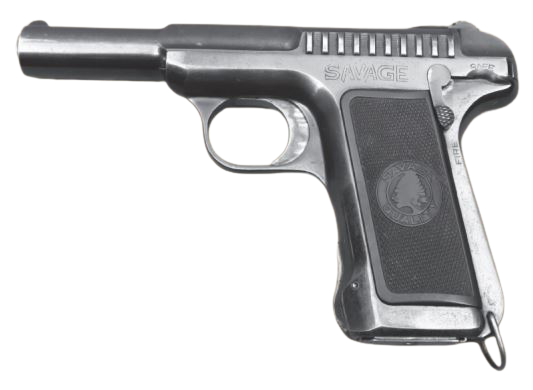 Most combatant countries in WW1 either started with a deficit of handguns, or soon exhausted their stock. France was one of the countries trying to buy handguns wherever they could.

Bailey Brower, in his book SAVAGE PISTOLS, tells us that the Government of France purchased about 30,000 to 40,000 Savage Model 1907 pistols in two batches after Savage sent a quantity of guns out of their inventory for a hurry-up order. The first batch shipped in 1915 and the second in 1917. The serial number range of the second batch was 150,000 to 166742, so your pistol is one of the last shipped in the February 1917 batch.

Other than the serial numbers, the key identifier on these contract guns is the lanyard ring at the base of the handle. Often these were removed by later owners, so watch for the two holes in the frame where the ring should be. MFC

I have a gun made by John Walker in England. The barrel is 42”, cal .76 smoothbore, bayonet lug on top, “No. 10” on top of barrel toward the proof marks. Four “proof” marks on top left of breech: crown over 4, crown over gp; star over IW, and crown over V..

What I am curious about is what is the meaning of all these stamps on the buttstock? Are they dates?

Yes, they are dates.

Another gun with almost exact markings is on page 200 of George Neumann’s “Battle Weapons of the American Revolution.” And another is on page 21 of Volume 2 of David Harding’s four volume set on the British East India Company. You can see most of the same numbers as in yours in the photographs in the books. 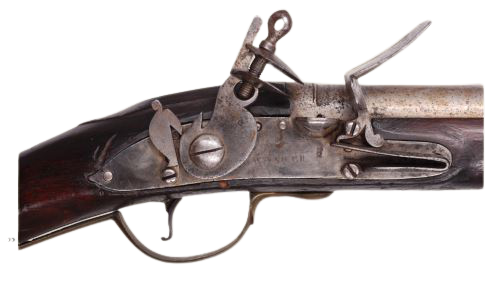 It is Harding who told me that these muskets were Ship’s Muskets on the United East India Company’s merchant ships plying the England to India trade. All of the stampings on the stocks are dates when the guns were re-inspected between trips. The gun shown in Harding’s book is serial No. 9 (these are actually numbers to match the bayonets), and has most of the same dates yours has. 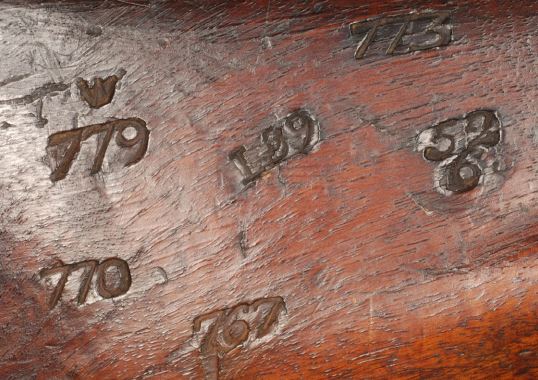 The four proof marks on the barrel are two London testing and viewing marks in the ovals. The Crown over 4 is the mark of the East India Company small arms inspector Thomas Hatcher. The star over IW is the mark of John Walker. He was apprenticed to Joseph Shorey, 1717; free of Gunmakers Company, by redemption (his master dying), and proof piece approved in 1722. Elected assistant in 1740, Master in 1744. Gunmaker to East India Company 1736–1747. He died in 1748. His shop was at the Sign of the Cross Guns & Sun, Lombard St., London.