There is a class of small pocket pistols that must have appeared on the scene just as percussion caps were first coming into use in England. They are characterized by having an L-shaped device that pivots down around the nipple and encloses it. See the photos of a pair by Hole of Bristol with the device up. These are called TopHat pistols because presumably the device holds the flanges of a top-hat percussion cap in place. I have seen an article by Peter Bower that claims this device is actually a protector. What are your thoughts on this? 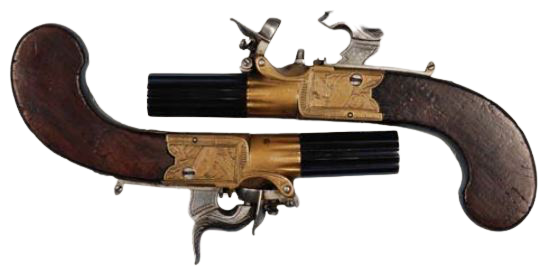 I have some cap-guard pistols, so I decided to fire one. You will see why I call them

“cap guard” when you get to the end of this note.

I chose a Davidson / London pistol from my collection. As you know, these pocket pistols are loaded by unscrewing the barrel, filling the powder cavity with powder, placing a ball on top of the powder, and screwing the barrel back on. The ball is just a bit larger than the bore, so that it does not roll down the barrel while you are carrying the gun. I used a .464 caliber ball and filled the powder cavity to the maximum with 10.5 grains of 4Fg black powder.

Here are photos of the cap as it appeared when I fired the Davidson. It split, but was contained

Then I fired four caps with the guard raised out of position. You can see the caps without the cap guard in place have shattered and pieces have flown off. The cause is the flat face on the hammer. It didn’t take too long for some gunsmith to realize he could dispense with the cap-guard apparatus if he hollowed out the face of the percussion hammer so that its cavity would enclose and shield the cap. Hence, the short life of “cap-guard” pistols. 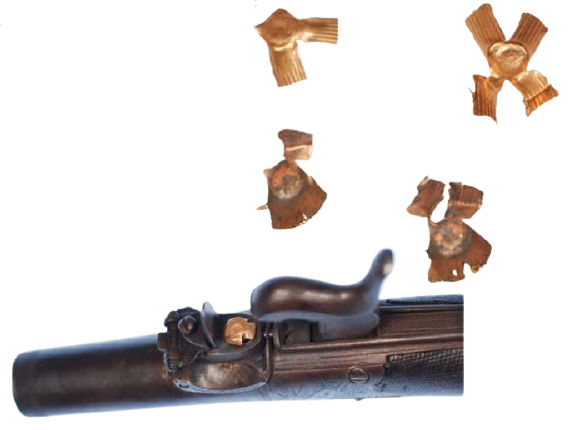 I have included a photo of a pair of Hole of Bristol pistols to show the cap guard up on one and down on the other. Notice the nipple with concentric circles on it. That is typical for these cap-guard pistols. You should be able to see the flat face of the hammer in the upper photo. MFC

I was traveling on my own during my youth in Nepal. Of course, there were Kukri knives everywhere, and I noticed the small notch on the bottom of the blade, near the handle, had various forms. I was not conversant enough in the language so didn’t ask the meaning of the various shapes of the notch. Do you know?

I had the impression that it had some sexual significance, but decided I had better do some checking before committing to print.

An excellent source for information on these knives of the Gurkhas and Nepalese is The International Kukri Research & Historical Society www.IKRHS.com.

This notch is called the kaudi or the cho. And, yes, it sometimes represents the sexual organs of the Gods. But more commonly, it may represent religious motifs, shapes of Shiva temples, eyes of Buddha, a peacock/pheasant head, cow hoof, good luck symbols, and any other shape that would ensure prowess and good fortune in combat and its life.

Most of the images shown are from the collection of Ted Fitzwater. Thank you, Ted. MFC 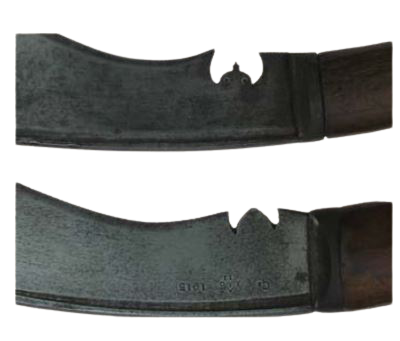 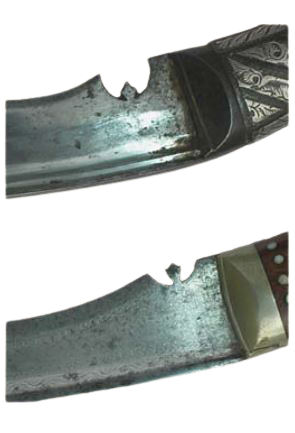 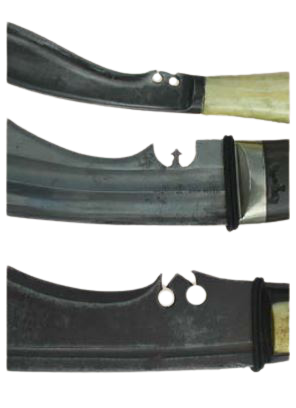 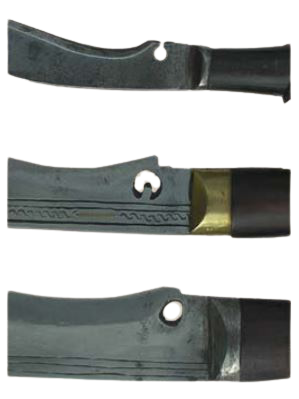 I had a very difficult time finding a photo of a rammer for this revolver. They were issued as a separate piece, i.e., they were not attached to the revolver. Over the decades most seem to have been misplaced.

Finally, Dennis Lea of Russell Vale, New South Wales, Australia, offered to send me a photo to use in this column. Thank you very much, Dennis. The purpose of this magazine is to share information worldwide, and this is a great example. MFC

Question: from Plymouth, MI via the Internet

I have a Stevens Model 20 FAVORITE in caliber .32 Shot as shown in the attached photos. Can you enlighten me on this chambering? Anywhere I might find information on this ammunition?

Here is a page from the Stevens 1898 catalog, and on the next page it describes the ammunition for yours as .32 rimfire Long Shot.

There were some small name changes 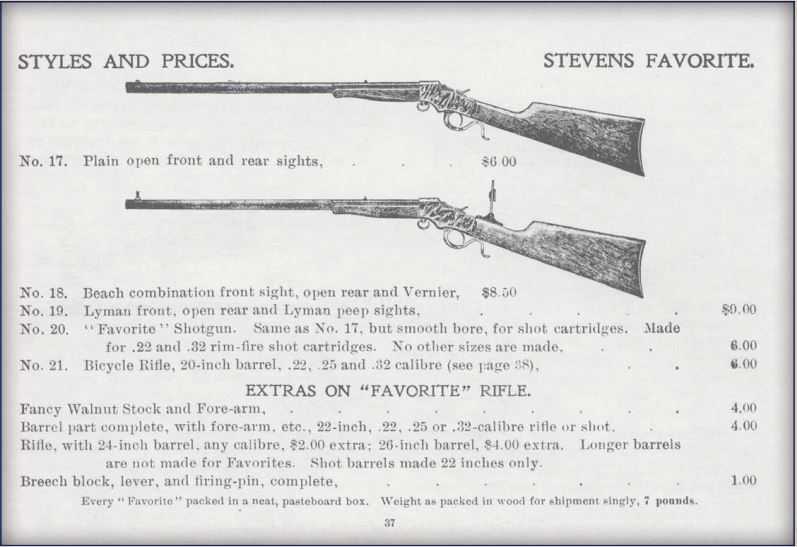 during those years, so if you can tell me the exact name on your gun, I may be able

to give you a better idea of the age.

It should be one of these:

Fjestad’s Blue Book of Gun Values lists the .22 shot and .32 shot models at the

In reading history books and even technical descriptions of cannon shooting, I often see reference to a Portfire used in igniting cannons. What exactly is this?

As it happens, I have looked into this in connection with my studies of the Expedition of Lewis & Clark. On April 2, 1806, Captain Clark was meeting with some natives near the great falls of the Columbia River. He wanted to impress them and he happened to have a portfire stick with him. He “. . . cut off a piece one inch in length and put it into the fire. . . the port fire caught and burned vehemently, which changed the colour of the fire.” Which impressed, and maybe frightened the Indians.

The portfire of L&C is described in contemporary manuals that would be familiar to artillerymen of their time period. The construction of portfires is carefully described in these two books in my library: DeSheel’s TREATISE ON ARTILLERY published in 1800 and Adrian Caruana’s BRITISH ARTILLERY AMMUNITION

1780. In addition, I subscribe to a periodical THE ARTILLERYMAN that has had several articles on the construction and use of the portfire.

Since the purpose of the portfire is to light the fuse in the vent of a cannon, a hot, relatively slow burning source is needed. Of the six formulae I reviewed, all were similar except in small details. First a paper tube is constructed to facilitate the forming of a stick of portfire approximately 12” long and about half an inch in diameter. A mixture of sulphur, potassium nitrate, and mealed blackpower is prepared. It is poured down the tube (which is supported in a mould or a metal tube) and an iron or wooden rod is inserted and pounded with a hammer to compress the powder. In two of the formulae, the resulting stick of portfire is soaked in linseed oil and allowed to dry.

The finished portfire stick is held in a wooden handle that appears to be about 24” long so that the vent of the cannon can be reached without getting dangerously close. One formula said the composition would burn about 19 seconds per inch. A U.S. Ordnance Manual stated the portfire should burn 1.75” in one minute. MFC 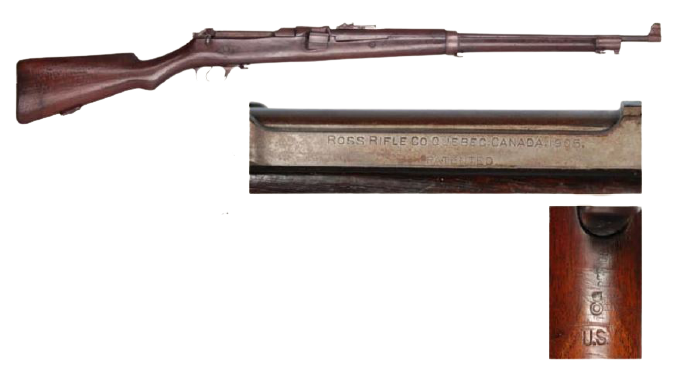 I have a Canadian Ross rifle and am having trouble figuring out just what model it is. I don’t find a lot in print that distinguishes the various Models and Marks. Additionally, this one has U.S. marks in the wood behind the trigger guard. There are all sorts of marks and numbers on the right side of the buttstock that are lined out. I presume these are various Canadian unit markings, and that the gun must have been in several Canadian units.

From what I can find in various articles and books, you have a Model 1905 Ross Military rifle Mk II*** that was eventually sold to the U.S. government to be used for training troops at home because of our shortage of rifles during WW1.

The best reference that I could find is THE ROSS RIFLE STORY, by Phillips, Dupuis, and Chadwick. On page 176 they describe the Mk II*** as one of about 20,000 sold to the United States in 1917. One of the distinguishing things on this batch is the folding rear sight by the Canada Tool & Specialty Company. These guns all had a U.S. stamp below a flaming bomb on the bottom of the grip area. In your photo of the buttstock can be seen the round stamp QUEBEC and D C around a Broad Arrow. DC is Dominion of Canada. Right next to this stamp is a large Roman numeral II and 3* indicating Mk II*** for the third iteration of the Mk II.

You may have heard that the Bolt on the Ross rifle can blow out the back if it is not assembled properly. That does not apply to the Model 1905 series of rifles. MFC 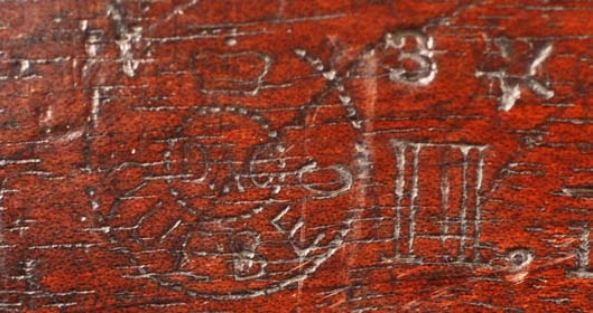 We have this strange rifle and have no idea what it is. It is a muzzle loading percussion rifle, the percussion cap sits halfway to the muzzle and is set off by the hammer hitting a rod which transfers the strike to the cap way down the barrel. At this point the barrel can be taken off by removing one screw. The caliber is about .50, and the shooting part is all forward of the takedown. The rear sight is calibrated to 1100 units---meters? The only marks are 400 on most parts, and a C.C stamp in an oval. What the heck is this?

I’m going to start a WHATZIT category for these kinds of questions. Yours will be No. 1. The gun has a military appearance, it seems to be roughly finished (file marks, etc.), made of military parts (the rear sight), and has a large military-style nipple. The mechanism of transmitting the strike by a rod to the nipple far down the barrel is reminiscent of 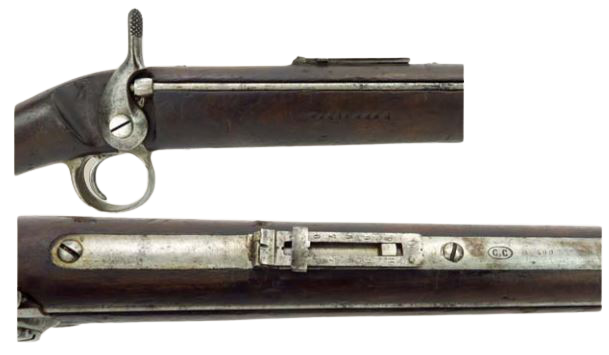 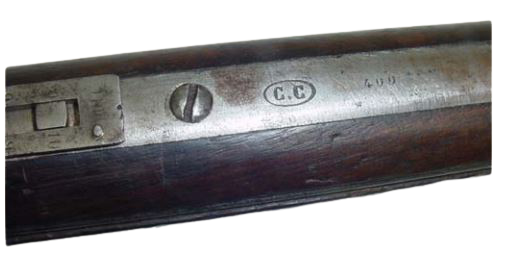 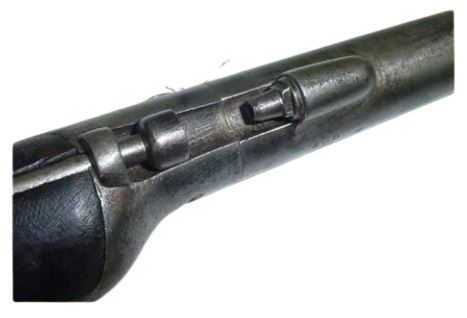 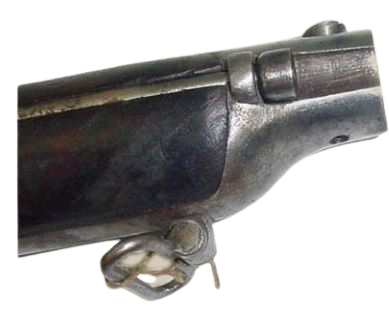 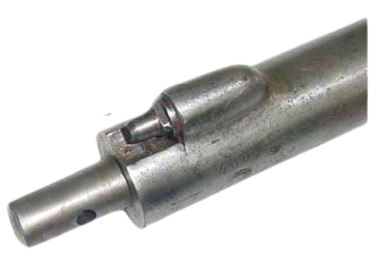 All photos by Rudolph Podrasky

a Zimmerstutzen parlor rifle. This certainly is not a parlor rifle. My guess is that this rifle was made as an experiment for a large-bore rifle that could be taken apart for concealment or transporting in difficult circumstances. Others have been made that fold or detach where the buttstock meets the back of the lock. Maybe this needed to be shorter? Maybe it is a gunmaker’s whimsical project? Let’s hear from the readers. MFC