The firm of North and Savage is well known for its percussion revolvers from the Civil War era. Lesser known are the few revolving rifles and carbines produced during those years. Many firms and gunsmiths had designed and produced revolving long arms-- they seemed a natural extension of the success of revolving handguns. Colt was clearly the most successful in this venue but even they met with limited success. Perhaps the fear of multiple discharges was a factor. At any rate, revolving rifles never really caught on and remain a bit of a curiosity to today’s collectors.

In this article we will look at a few seldom-seen examples of arms built by North and Savage as well as some of their early handguns.

A Brief History of the Firm

The firm of North and Savage was formed after Simeon North, the famous maker of U.S. single shot martial pistols, moved from Berlin, Connecticut to Middletown in 1811. To finance his new factory he took Josiah Savage into partnership. Josiah was North’s brother-in-law. In 1831, Josiah died and left half of the partnership to his son Edward. At about the same time, Simeon turned over a portion of his interest in the firm to his son James. The name of the firm was then changed to North and Savage although the single shot pistols made by them continued to be marked “S. North/Middletown, CT”. After Simeon’s death in 1852, the revolver became their product line and the markings were changed to indicate the North-Savage partnership. Upon the death of James North in 1856, Edward Savage became sole owner of the firm.

Henry S. North was the son of James North and worked for the firm. He is not known to have any ownership role but is responsible for several patents issued and assigned to North and Savage. He seems to have been the creative genius of the firm. (see below)

It was during the 1850’s that the so-called “Figure 8” revolvers were produced. They followed a steady progression of improvements throughout their production life and at least four versions of these revolvers were made. The various versions are shown in Figures 1 through 6.

1- The first of the revolvers- the brass frame Figure 8. 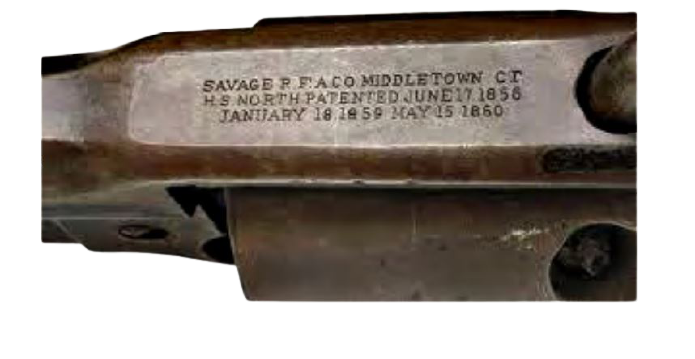 2 - The frame markings on the Savage Navy Revolver 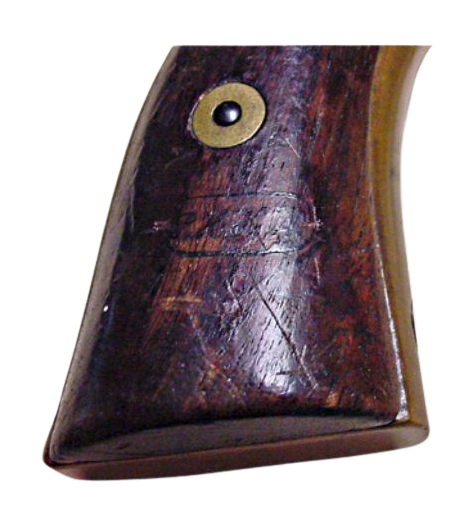 3- Some of the brass frame Figure 8’s were purchased by the Ordnance Department. The inspector cartouche on the right grip is that of Major Robert H.K. Whitley

4- The second variation of the Figure 8 revolver had an iron frame.

5- The final variation of the Figure 8 revolver had a flattened frame.

6- The ultimate Savage was sold extensively both commercially and to the Federal Government.

The firm had apparently decided to offer several features not otherwise present in competitive arms. The design of the revolvers, both handguns and long arms, featured a self-cocking mechanism coupled with a cylinder rotating device and a feature that moved the cylinder forward, effecting a closer seal with the barrel cone. They also experimented with a self-priming system somewhat similar to that used by Butterfield but no specimen is known. 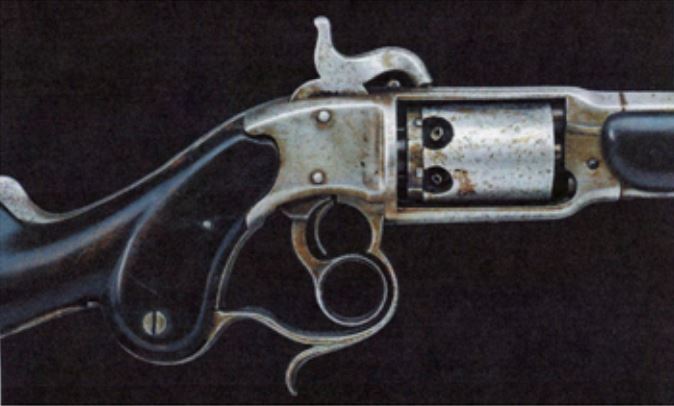 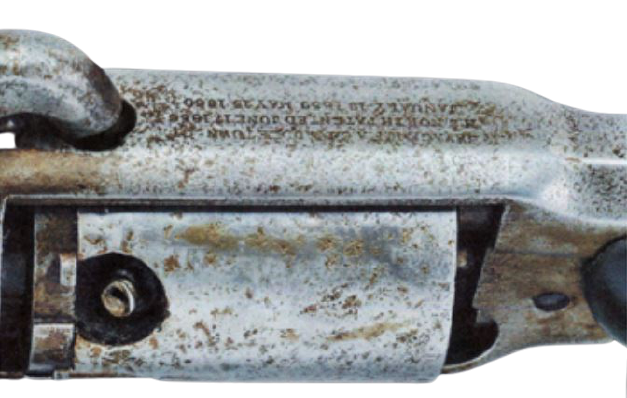 7- Whether this unusual configuration was made by Savage or adapted by a skilled gunsmith is not known. The Savage Revolving Fire-Arms Company is known to have experimented with detachable shoulder stocks. Several versions are shown in the William Locke Collection book.

Although the ideas seemed to make sense on the drawing board, in actuality they were awkward to use and never achieved the popularity of Colt or Remington.

Several patents were issued to the firm, most bore the Henry S. North name:

The story of North & Savages foray into the field of longarms is a short one. Percussion revolving rifles were made by many firms and even more gunsmiths. They were never a good concept. With all percussion revolvers there was always the danger of multiple discharges. With a pistol it was more of an inconvenience but with a rifle, if the shooter were holding it like a normal rifle, there was a danger of losing a hand. The solution was to hold the gun with one hand on the buttstock and trigger, the other just in front of the trigger guard-- a decidedly awkward arrangement.

8- These two North-Savage longarms are the subject of this article. Above is the production model, about 400 of which were manufactured. Below is the patent model, probably unique, for a design which was never put into production. (See Figure 21).

9- Henry S. North was known to submit completed arms as patent models. Although this is a fully functional action, the barrel was never rifled and the metal is riddled with tiny cracks which have been “stopped” with tiny inserted pins. The gun was never intended to fire.

10- Pulling backward on the ring in front of the trigger guard cocks the hammer and rotates the cylinder, moving it forward against the barrel cone.

11- The marking on the patent model.

12- The North and Savage Revolving Rifle was made in two versions, the loading lever being the variant feature. They were marked “THE WORLDS REVOLVER” on a barrel flat. Probably only about four hundred were made

13- The action opens. Note the wedge behind the cylinder that forces the cylinder forward upon closing, forming a good seal with the barrel cone. 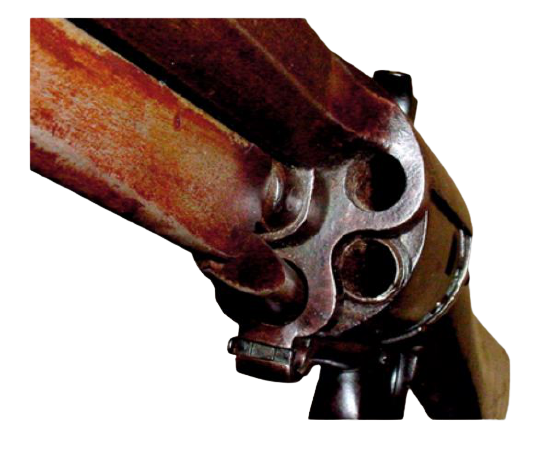 14- In the event of a multiple discharge, the area in front of the chambers was open to allow bullets to escape.

15- THE WORLDS REVOLVER lightly stamped on the barrel.

North & Savage longarms, like their pistols, focused on two improvements-- first the self -cocking feature and second, the movement of the cylinder forward to create a better seal with the barrel cone.

They apparently had high hopes for their rifle, somewhat ostentatiously naming it “The Worlds Revolver” . Clearly it never became such as only about 400 were produced. About half seem to have a loading lever with a hinged rammer, the rest used a creeping lever like the Model 1860 Colt Army revolver.

They toyed with an earlier version, shown on the cover and in Figure 9 thru 11. It is apparently a one-of a-kind patent model as the barrel was never rifled and shows tiny cracks stopped with drilled pins. The neck of the stock is reinforced with a copper plate, probably to repair a break. 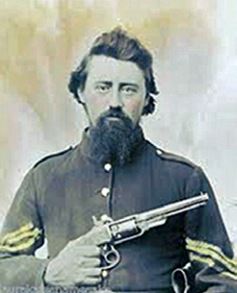 17- A soldier armed with a Savage Navy Revolver. 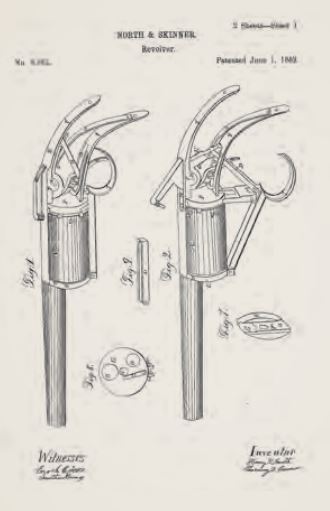 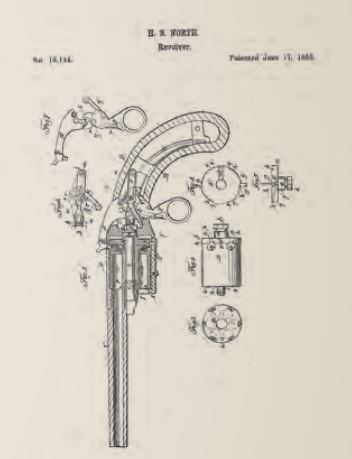 19- One of the early pistol patents 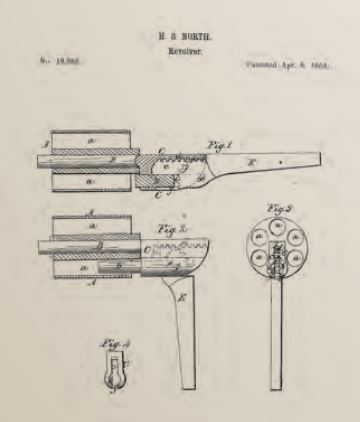 20- The creeping loading lever used on some of the rifles and pistols. 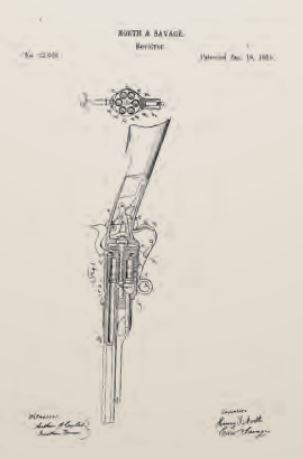 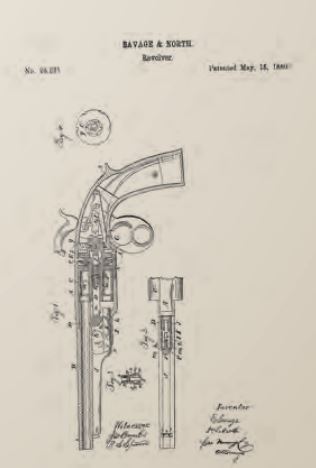