This is a trip to the outer edges of arms lore. While we were researching a forthcoming article on Civil War Torpedoes, we ran across a curious subject. It was bizarre enough that it piqued our interest such that we looked into the subject further and were quite fascinated with what we learned.

Maudlin as it sounds, there had always been a brisk business in unearthing freshly buried corpses. Sometimes to sell the bodies for anatomical study and sometimes to retrieve valuable jewelry. 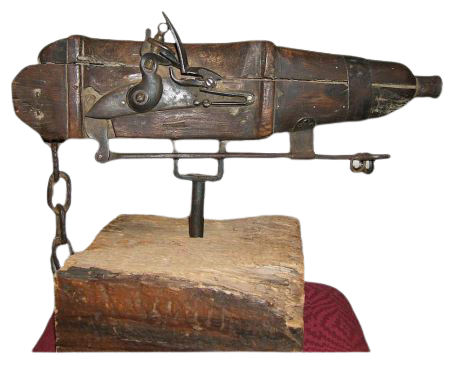 Figure 1 - A Cemetery Gun. These show up often enough that they were clearly manufactured, not home-built as the specimen shown in Figure 2. 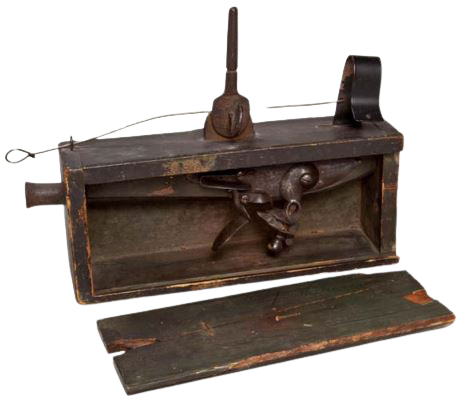 Figure 2 - A little ingenuity and an old musket produce this device.

Numerous techniques were devised to assure that the departed would rest in peace. Occasionally collectors will encounter a specimen of the “cemetery gun”. These were often used in cemeteries to foil late-night incursions. Mourners and visitors were well aware of these devices. They were removed during daylight hours and relocated at unpredictable and varied locations at night. Even if they failed to wound the would-be thief, they acted as an alarm to alert the night watchman. Figures 1 and 2 are examples of these devices.

It was just after the Civil War that the demand for fresh bodies spiked. From 1865 to 1890, the number of medical schools in the United States doubled. The schools needed fresh cadavers to train budding surgeons in anatomy and physiology. The only legitimate source of bodies were condemned criminals and those few families willing to consign their departed to medical science. This led to a burgeoning trade in fresh corpses.

As might be expected, inventive minds turned toward a solution to the problem of grave robbing. 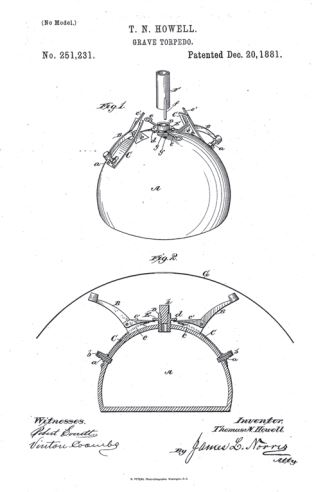 T.N. Howell developed and patented what he called a “grave torpedo”. It consisted of a container holding 3/4 pound of black powder. A triggering device using percussion caps was mounted on the top and the whole device was covered with a protective dished plate. The device would be placed atop the casket, armed and covered with earth at the burial. Any attempt to disinter the corpse would ignite a shaped-charge directed at the would-be grave robber. (See Figure 3) (Possibly providing an even fresher corpse??)

An advertisement for the device read -- 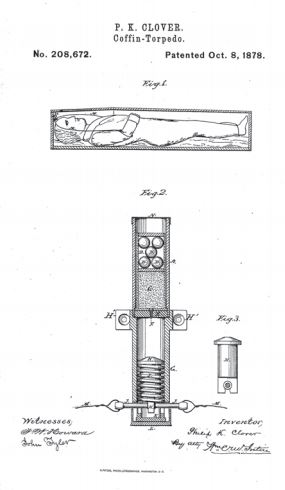 “sleep well sweet angel, let no fears of ghouls disturb thy rest, for above thy shrouded form lies a torpedo, ready to make minced meat of anyone who attempts to convey you to the pickling vat”

Yet another inventor devised a mechanism that would fire a shotgun blast of .36 caliber pellets should anyone attempt to lift the lid of a coffin after internment. P.K. Clover’s “Coffin Torpedo” was patented in 1878. (See Figure 4)

Specimens of these devices have shown up on Antique RoadShow and the PBS Show, “History Detectives”. A conversation piece for the dedicated collector of “Arms Curiosa”