As collectors we should owe a sense of gratitude to the early investigators and authors that documented their findings relating the development of the Pistole Parabellum. Given the times and methods of communication their results should be applauded. I specifically refer to Fred Datig, Harry Jones and John Walters. These gentlemen have provided us all a basis to build our appreciation of these historic technical achievements. Unfortunately there have been some early mistakes of timing and interpretations which have now been corrected. More modern investigators have added and expanded to the story.

At the end of the 19th century, world governments were modernizing their military units. This period witnessed the development of many attempts to produce a reliable semi automatic pistol. It seems like everyone familiar with the Luger knows that the Swiss were the first to adopt them. This narrative is an introduction into more details of the Swiss Parabellum development.

In 1897 the Deutsche Waffen und Munitionsfabriken (DWM) introduced Switzerland to the BorchardtLuger. George Luger represented DWM in the Swiss tests conducted on the Borchardt-Luger in 7.65 Luger caliber on November 23-26, 1898 (1:46-47). These were vigorous tests very comparable to modern US and British evaluations (1:48-49). Five automatic pistols were simultaneously tested. The competition was between Borchardt-Luger, Roth, Mannlicher, Bergmann and Mauser. First place won by a healthy margin was the Borchardt-Luger (1:51).

At the request of the “Revue Military Suisse” twenty additional Borchardt-Lugers with minor modifications were provided by DWM for testing by military schools and shooting clubs between 1899 and 1900 (1:64).

The Swiss Federal Parliament adopted the Borchardt -Luger as their ordnance weapon on April 30, 1900. The official name is “Pistole, Ordonnanz 1900, System Borchardt-Luger” (1:67).

Switzerland was the first nation to adopt the Borchardt -Luger as their ordnance weapon. With minor changes to the new pistol the DWM Model 1900 was marketed as the “Parabellum” throughout the world and as the “Luger” in the United States of America.

George Luger and DWM became extremely active in marketing their new pistol, the Parabellum, in all parts of the world. Personal demonstrations of the Parabellum were conducted by George Luger in numerous places.

The cartridge was developed by George Luger for this pistol. A bottle necked case was utilized for the 7.65x23mm cartridge. The new cartridge was the 7.65 Parabellum known around the world and the .30 Luger in the USA.

During forty seven years of military service the Swiss utilized four basic variations of the Parabellum. Collectors have created these labels for the four variations.

There were many Swiss sub-variations of each of these basic variations but they all shared the Parabellum functional mechanism and the following features.

The DWM commercial Swiss Old Model Parabellums have the crown/B, crown/U, crown/G German proof marks made for the Swiss civilian market before 1912. After 1912 these civilian pistols have the lazy crown/N proof mark.

For the military Parabellums a small Swiss Federal cross (+) was used as a proof mark on the ordnance pistols. The Swiss acceptance marks for the Directors of the Waffenkontrolle in Bern were a +/V for Major Vogelsang until1912 and +/M for Major Muhlemann after 1913 (2:552).

An additional stamped marking found on many Swiss pistols is a P. The P is a privatized stamp added to Swiss military Lugers when the officers carrying them retained these pistols for personal use when they left military service.

The Swiss Model 1900 DWM serial numbers started with 01. Serial numbers 01 to 010 were hand engraved with a Swiss Cross in sunburst over the receiver breech chamber. These first ten Parabellums were given to key Swiss individuals (2:171).

DWM supplied completed pistols as well as unfinished components. To establish national content a prior agreement with DWM provided unfinished Parabellums and components to the Bern arsenal for final assembly and finishing by the Swiss. This practice allowed the Swiss to become familiar with the manufacturing techniques required for Parabellum production. The Bern arsenal W+F not only assembled and finished pistols they also manufactured components.

The 1900 Parabellum was the first variation of the Switzerland Army Standard pistol. The receiver breech was rolled marked with the Swiss Cross in a sunburst. The center link of the toggle system was roll marked DWM. 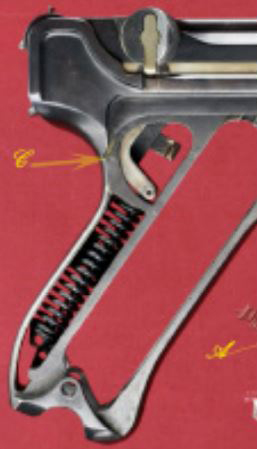 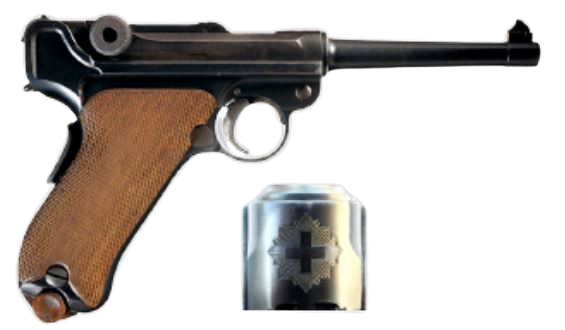 The Model 1900/06 DWM Parabellum was the second variation of the Switzerland Army Standard pistol. During the production of this variation the breech chamber marking was changed to the Swiss Cross in shield. Early collectors erroneously claimed the Swiss cross in shield was for police pistols. 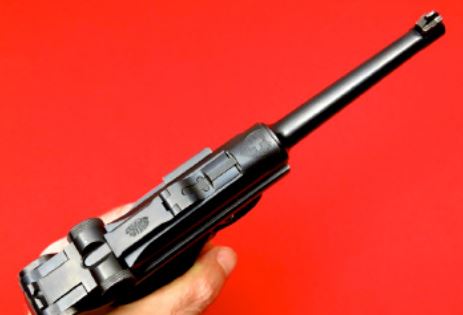 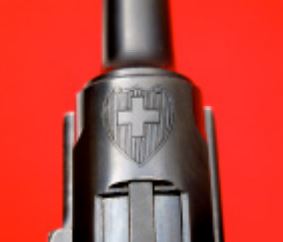 In 1914 the German war effort required the full DWM production of the Parabellum P.08. This eliminated the DWM commercial or contract sales. Switzerland’s request for new Parabellums could not be supplied. The W+F Bern arsenal had manufactured components and assembled Parabellum pistols. In 1914 Swiss started to develop plans to completely manufacture Parabellums at the Bern Arsenal.

The center toggle link is a roll marked Swiss Cross/ Waffenfabrik/ Bern. This variation is a fully functional copy of the Model 1900/06 DWM. The most striking difference is the wide border wooden grips.

Collectors had initially labeled this variation as the 06/24. Today this variation has become more First Swiss Model 1900/06 DWM acceptable referred to as W+F. 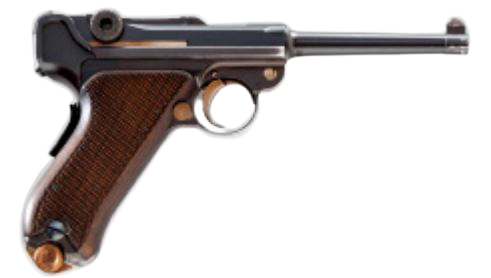 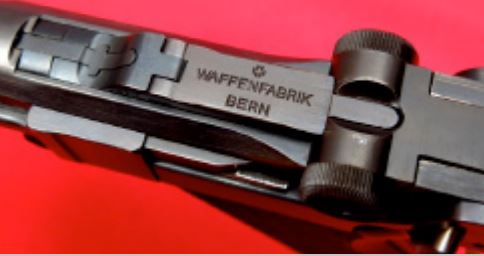 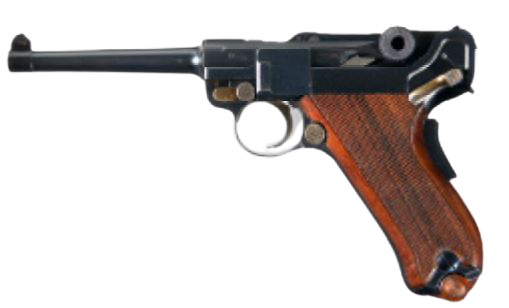 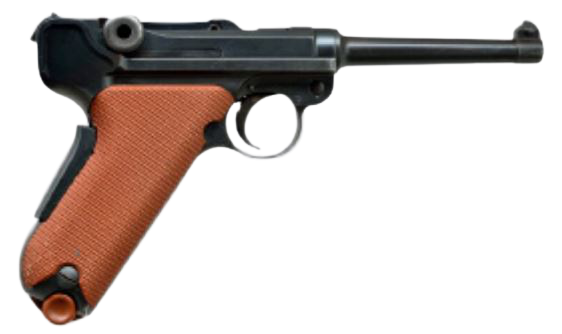 The Parabellum is a fairly complicated pistol, requiring quite a bit of precision hand-fitting to manufacture, and tight tolerances between parts. In an effort to reduce production cost the Bern arsenal made design modifications to the pistol to simplify manufacturing.

The appearance of this variation is very different. The toggle cocking knobs are not knurled for finger gripping. The center toggle link is rolled marked with the Swiss Federal Coat of Arms. The chamber end of the receiver is cylindrical matching the diameter of the barrel flange. The front grip strap is straight. The grips are an early grade of plastic. 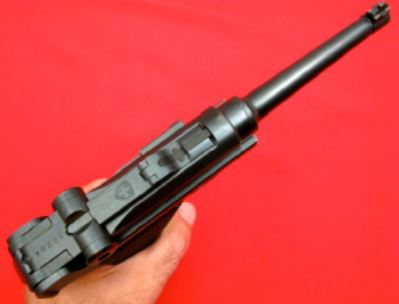 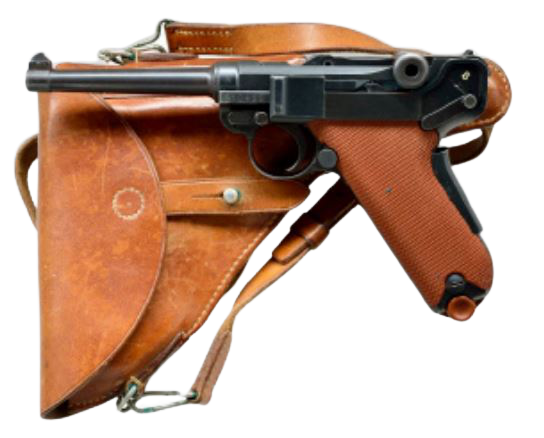 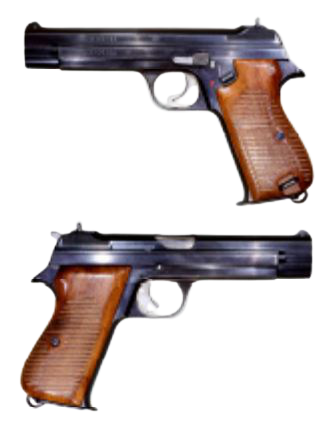 Luger pistol components were manufactured to tight tolerances. The Luger is a precision hand fitting pistol. All these things contribute to performance and accuracy. The natural feel and pointing of the Parabellum makes it an extension of the shooter's arm. Even though the Luger pistol design is over a hundred years old they are ageless and will be enjoyed by collectors and shooters for many more years.

3: “The Luger Story” by John Walters