As with other European militaries in the 1860s, Belgium decided to take a two-step approach to rearming its infantry: conversion of existing stocks of muzzle-loaders, followed by adoption of a purpose-designed breech-loading rifle. It took two different and independent commissions, however, to specify the path to be taken. After several trials of existing ammunition types, one commission laid down very basic requirements for just the cartridge: a projectile of 11mm diameter, containing 5 grams of Infantry “Wetteren'' No. 3 powder, and a metal case. And that was it. Meanwhile, influenced by developments in England, a second commission recommended the adoption of the Albini-Braendlin system for conversion of the current supply of muzzle-loading rifles. Eventually, the l'Ecole de Pyrotechnie d'Anvers (School of Pyrotechnics, Antwerp) came up with a completed design for a center-fire cartridge, using a paper-and-foil Potter Style case with a one-piece brass head, but with a disk primer designed by Louis Bachmann of Brussels.

The Model 1867 11mm Belgian cartridge, shown in Figure 1, had a number of issues. Nominally set to a case length of 50mm, sloppy manufacturing tolerances resulted in as much as a 3-millimeter variation in actual length. The thin paper covering tended to burn and clog the chamber after prolonged firing, and the relatively thin rim often resulted in extraction problems. Addressing these problems led to a bewildering series of changes in the next several years once production was handed off to Bachmann. The company effectively turned the cartridge inside out, removing the outside covering but adding an internal paper liner to prevent chemical reaction between the brass and powder. It simplified case trimming, and replaced the original Chassepot designed patched bullet with a simpler unpatched on. Known as the “Engelbert” after its designer, this bullet is easily identified by the heavy external grease groove. In 1871, the bullet was changed further to a longer, heavier design (Figure 2). While still retaining the original disk primer, the accuracy of the Model 1871 ranked among the best in the world – an important criterion to a nation with a vibrant sports-shooting community.

In addition to the 11x50r manufactured for national needs, Bachmann produced this style of cartridge in several calibers for other customers. Many, such as the 12.2x70R Montigny mitrailleuse (Figure 3, which unfortunately has a very corroded bullet) have a raised “B” headstamp (Figure 4). One very unusual variation is the .56-50 Spencer centerfire (Figure 5). A rare caliber in and of itself, this example not only does it use the Bachmann Style case and disc priming but has a raised “D” headstamp (which unfortunately proved too difficult to photograph). This may have been accidental; the upper portion of the letter is cut off by the primer pocket. It may have also been intentional, if Bachmann had been trying to disguise its origin for a military buyer.

In response to complaints about cost by Belgian civilian shooters, Bachmann took a step backwards in the next design of the 11x50r. The same year the heavier bullet was adopted, the company reintroduced a case with an external paper covering. Known officially as the “Model 1871 Commercial” (Figure 6), it suffered the same chamber-clogging residue problem as the original Model 1867. Production ended after only a few lots, but a similar pattern would be produced for the use of the Pope’s Swiss Guards. Armed with .50-70 Remingtons, these weapons apparently proved more forgiving of the external paper covering (Figure 7).

At some point the disc priming system fell out of favor, as variations with a more usual Berdan central-fire primer (Figure 8) were also made by Bachmann. Known as the Model 1882 in 11x50r caliber, the cartridge otherwise retained the characteristics of the Model 1871; Figure 9 shows both the cartridge and its original packet.

Of the various patterns of coiled-case cartridges examined so far, only the Potter and Gevelot types were early enough to have influenced Boxer’s solution for the Snider cartridge. As the head of the national ammunition factories, Boxer would logically have been familiar with developments in small arms ammunition, had he been able to devote any time to study them. As will be explored later, however, Boxer was a very busy man in 1865. The success of the Boxer design did suggest to Belgium the value of the coiled-case for inexpensive yet very serviceable ammunition, which illustrates how ideas influence each other in the development of new technology. In the next volume of AHM, we will examine the use of the coiled case in the United States, especially the patents of Silas Crispin and how they may – or may not – have contributed to Boxer’s cartridge.

Figure 4: The raised “B” headstamp, common to many Bachmann cartridges. Note the small, flush disc primer. 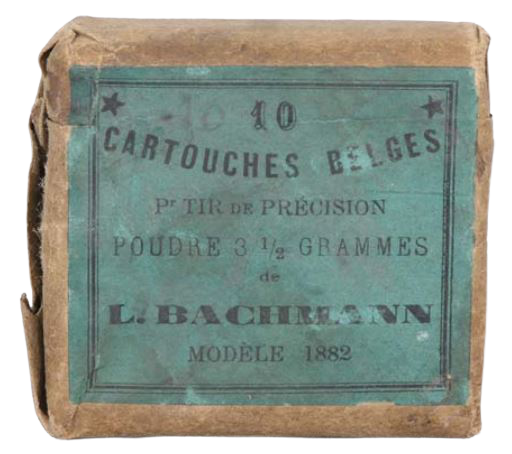 Note: All photos are from the author’s collection.