Franford Arsenal conducted an extensive series of experiments with metallic cartridges from 1860 to 1873, including the Crispin wrapped metal case. Maj. T. J. Treadwell reported that the 1867 experiments used cartridges consisting of a .002”-thick strip of brass, hand rolled with paper. Using two turns of metal and three of paper, this puts a layer of the latter inside the case to minimize corrosion from the powder. The brass head was held in place by a paper wad. Although Treadwell reported that they were “extracting easily” after firing, he considered this design as “not reliable, it being affected by time and atmospheric changes in the loosening of the case from the head.”

Shown are two different examples, both for the .50-70 Springfield. Figure 1 uses yellow paper, and has the number “38” in ink on the side (not shown); Figure 2 is mint green paper, turned to show the number “40.” Presumably these were numbers keyed to match written descriptions, possibly for the 1876 Centennial Exposition in Philadelphia. The gap suggests a third version with another color paper, but No. 39 has yet to turn up. 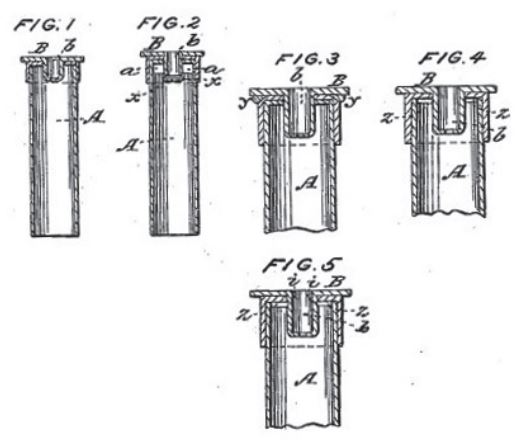 In 1870, the disastrous losses by the French army during their war with Germany led French purchasing agents to scour the world, seeking replacements for the hundreds of thousands of Chassepot rifles lost. American rifle-makers were happy to help, with whatever weaponry was available. In addition to .50-70 Springfields (already in production for the U.S. Army), an order of 100,000 Egyptian Remingtons were redirected to meet French needs as well. Cartridges for both were made using a design from Crispin’s US Patent No. 113,634 of 11 Apr 1871 (Figure 3). The patent

specified a “solid metallic disk for cartridges… and a cap and anvil chamber or receiver made in one piece, and constructed so as to admit the body of the cartridge being secured to it by means of a wad.” Alternatively, it could also consist of a one-piece head and cap chamber, combined with a “tubular cartridge case, when secured thereto by means of solder.” The case could be “made of paper, linen, or any other suitable material.” Given the lead time required in securing patents, it is likely that Crispin was experimenting with these designs as early as 1869.

C. D. Leet of Springfield, MA was contracted to make ammunition for the rifles under order, and both calibers used a tinned iron head riveted to a brass foil case via the primer pocket. Figure 4 is a loaded .50-70 cartridge, which may be found in near-new condition – suggesting that the ammunition order wasn’t completed in time to see actual combat. Figure 5 is a cutaway that shows the internal head construction. Once part of a display board, the reverse side of the cartridge has two solder-reinforced mounting holes and a rectangular portion of the case cut out. It also has the number “XI” carved into the case; this may also have been part of the 1876 Exhibition. Note that the bullets in both examples have flattened points; Figure 6, however, appears to have a heavier, pointed bullet. It also illustrates one of the major weaknesses of Crispin’s design, as the primer pocket has been pulled clear out of the case. Figure 7 is an example of the 11.43x50r Egyptian; it has two dot crimps in the neck, and a deep grease groove in the bullet. There are considerable variations in case & bullet length and crimp position in these cartridges, indicating either several different lots or sloppy tolerances on C. D. Let's party. Some examples have been noted with a smooth Chassepot bullet, using cases reloaded in France.

To wrap up the story of Crispin and his cartridge designs, Figure 8 shows an example made under the second method of his 1871 patent. Again in .50-70, this has the single-piece head attached to a case with a single coil of brass foil; Figure 9 shows a cutaway version of the same.

Frankford Arsenal must have had a supply of the coiled case tubes at hand, as the last two examples use these to illustrate two novel forms of cartridge design. Figure 10 shows an example of the Prince front-ignition cartridge. Another former board display, it also has two solder-reinforced mounting holes. Figure 11is an experimental “cast base” case, tried at Frankford in February, 1872. Treadwell wrote that “if a metal or alloy could be found that would flow into mold through small gates and…resist pressure in the gun and stiff enough to ensure extraction…such a case would be economical and could be made in an emergency with less plant and skilled labor.” His notes indicate that flanged, wrapped-foil case tubes were molded onto various lead-alloy bases, but all proved too brittle to allow extraction. As “no arrangement for casting under pressure being at hand, the trial was for the present discontinued.” It doesn’t appear to have been tried again. Personally, pouring molten metal around a live primer strikes me as being foolhardy, but Treadwell’s investigations into metallic cases were nothing if not thorough.