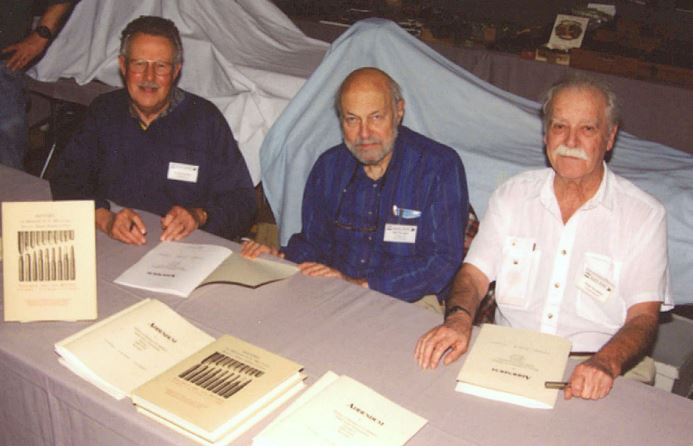 The authors- l to r - Col, Frank Hackley, Bill Woodin and the late Gene Scranton at a book signing event for previous volumes of their trilogy

While we don't usually dedicate this column to the promotion of books or other commercial items, we consider this long-awaited project to be of enough importance to break that precedent.

Arms and ammunition collectors almost always specialize, to some extent, in a particular field, with Colt and Winchester arms and ammunition perhaps being the most prominent examples. Within the field of ammunition collecting, one of the most popular specialties, at least in America, is U.S. military ammunition. The specialty is often divided into subspecialties, with some collectors seeking just Civil War cartridges, which is an area so broad it could easily occupy a lifetime; or World War II U.S. small arms ammunition. Other collectors go for artillery rounds, and some specialize in a single caliber, like the famous .45-70, .30-06, .223/5.56mm, or 7.62 NATO.

For three authors, collectors, and researchers; Col. Frank W. Hackley, USA (Ret), William H. Woodin, President, Woodin Laboratory, and the late Eugene L. Scranton, master cartridge illustrator, the chosen field is U.S. military small arms ammunition from the period beginning about 1880 (the advent of the externally primed, reloadable cartridge case) through 1977 (the year the U.S. Army’s Frankford Arsenal closed). These three gentlemen published their first book on the subject, History of Modern U.S. Military Small Arms Ammunition, Volume I, in 1967. It covered the period of 1880 through 1939, and included ammunition up to Cal. .50, plus shotshells, etc. The book was an instant success, with an addendum being published in 2002. The book is out of print, and is highly sought after.

In 1978, the trio published their second installment, History of Modern U.S. Military Small Arms Ammunition, Volume II, covering the World War II period between 1940 through 1945 with coverage of ammunition up to Cal. .60 plus shotshells and other miscellaneous rounds with a U.S. military connection. It is also now out of print. An addendum to Volume II was published in 2009.

These two volumes have become the standards against which other books on the subject are measured, mainly because of the meticulous research and documentation the authors were able to accomplish over the years. Col. Hackley was an Army ordnance officer and was the last commanding officer of Frankford Arsenal. During his career, he had access to records, drawings, technical reports, etc. not readily available to other researchers. The Woodin Laboratory in Tucson, Arizona houses the world’s greatest collection of U.S. and foreign military and police ammunition up to 34mm, and the late Gene Scranton was able to make his masterful cartridge drawings from actual specimens (some one-of-a-kind) in the Laboratory’s collection.

Since 1978, collectors worldwide have impatiently waited for the publication of History of Modern U.S. Military Small Arms Ammunition, Volume III, covering the period from 1946 to 1977, which includes the development of both .223/5.56mm and 7.62 NATO ammunition, to name just two calibers. Now, it appears that publication of Volume III is approaching steadily if not quickly, hopefully in 2013 or the first part of 2014 if all goes well. Volume III is massive, with about 600 pages total, 838 cartridge illustrations, and many rare box labels. The comprehensive Table of Contents runs 12 pages and lists every section of each of the three main parts’ 21 chapters and four appendices. To prepare for the book’s publication, a website is under development and an email book update list has been established by the book’s editor and publisher, Mel Carpenter, author and publisher of MBA Gyrojets and Other Ordnance, and whose work has appeared here in past issues. If you would like to be included on the email list and receive periodic updates on the book’s and web site’s progress, just send an email to Mel@Gyrojet.net indicating that you would like to participate. There is no obligation to buy anything.