When, in the year 1848, twenty-ve year old James Henry Dance rst traveled from Alabama to check out opportunities in Brazoria County, Texas, the last thing he could have imagined was that his name would become a staple of Texas folklore a century and a half later.

Perhaps no state more than Texas has had its history wound around the culture of the gun. Many different guns were associated with the early days of Texas – the Colt “Texas” Paterson, the Colt Walker, Colt Single Actions, the Winchester Model 1873 and many others, some of fact, others of myth. But the home-grown Dance revolver is perhaps the most iconic symbol of Texas weaponry. Here is a brief version of how it all came about.

After James Henry’s initial foray into Texas, he apparently liked what he saw. By 1852 the extended Dance family, complete with slaves, had migrated to 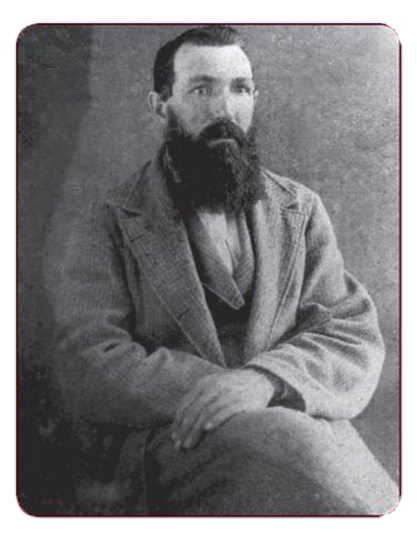 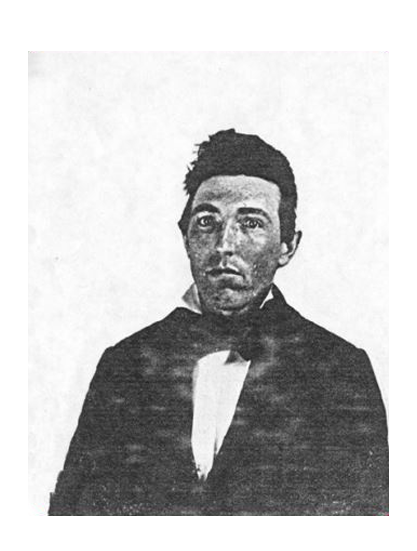 East Columbia, Texas, by then a bustling community on the Brazos River. The community had been founded in 1823 by Josiah Hughes Bell who had developed a plantation nearby, but perhaps more importantly, a landing on the Brazos River where supplies could be brought in to transport to inland settlements. The area was rst known as Bell’s Landing, but in 1824, Bell laid out a new town he intended to name Marion. e promotion was a failure and by 1831 there were only a few cabins, a country store and Bell’s own plantation house.

The area, however, was well suited to farming and as time passed, large sugar cane and cotton plantations were established, and the community blossomed. Mercantile stores, saloons, wharves, warehouses and large homes grew up around the Bell home. Bell sold the community in 1827 but the name “Bells Landing” persisted until about 1840. By 1842, when the inland prairie community called Columbia (the site of the First Congress of the Republic of Texas) was renamed West Columbia, Bell’s Landing became East Columbia.

Upon arrival in 1853, the Dance family purchased 450 acres of land in the Cedar Brake area of Brazoria County where they established a plantation. The plantation prospered and ve years later they expanded to the nearby port of East Columbia which was only a short run up the Brazos from the Gulf of Mexico, thus making it a perfect point of commerce to connect Texas to New Orleans. at asset plus the advent of a railroad link to 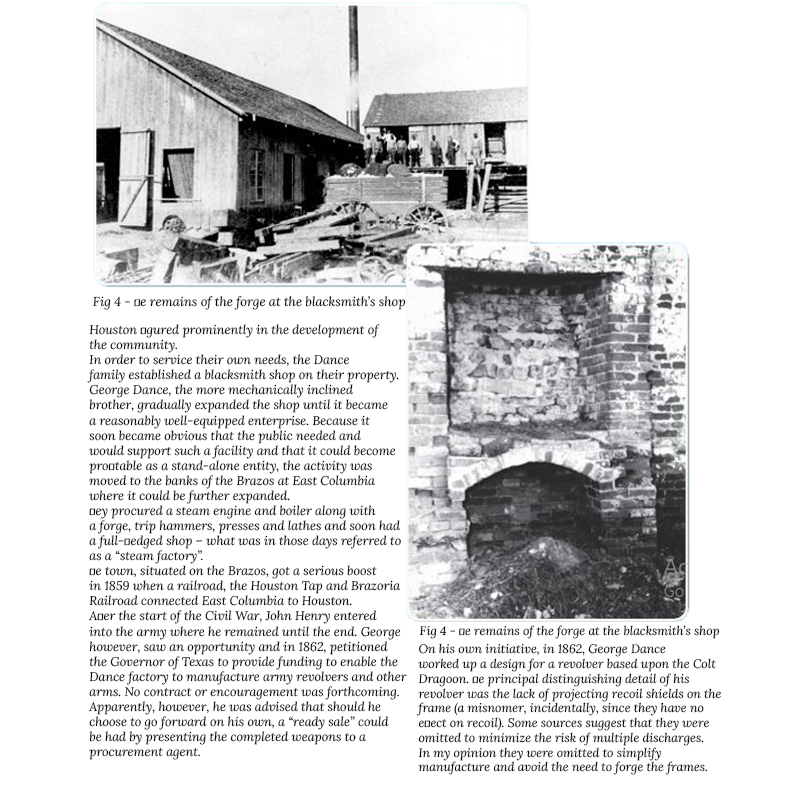 However, very few Dance Revolvers do, in fact, have Colt-like frames with recoil shields. George’s brother, David was involved in the project, but apparently the younger brother, Claudius was too sickly to participate. Most of the known surviving Dance revolvers show heavy use. Nonetheless, they are highly prized by 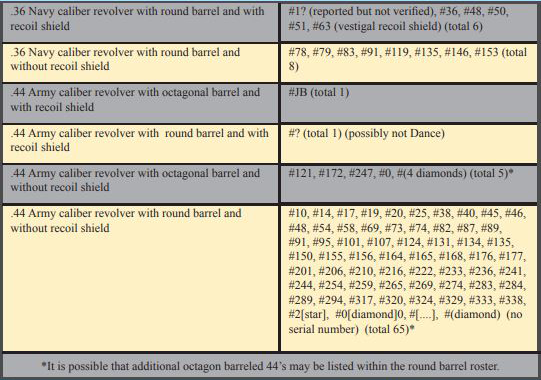 Dance revolvers are highly prized by collectors and carry significantly high prices. As such they have been frequently faked. The 36 caliber version is quite easy to replicate from a Colt Model 1851 Navy by milling on the recoil shields and turning the barrel to a round configuration. here are a few simple tests that can be made to help sort out the good from the bad. One of the hardest things to fake is the riing. A real Dance collector commands high prices on those rare occasions when they change hands.

The survival rate of Dance Revolvers seems to be about 20%. The following table gives an update of the 85 survivors known as of this writing(both .44 and .36 calibers) will have clockwise riing with no gain. e numbering stamps are the same as for the .44 caliber version and examples may be viewed in a number of the publications listed in the appendix. the shape of the trigger guard is distinctive and hard to fake. there are many other “tells”, less obvious, but known to serious students. We would suggest having any .36 caliber Dance revolver authenticated before purchase.

the .44’s are harder to fake by modifying Colt Dragoons. Because the cylinder is shorter than a dragoon, the barrel is longer. Riing is seven-groove, clockwise, again without gain. Several firms produced reproductions in the 1980’s. Uberti and Pietta , both 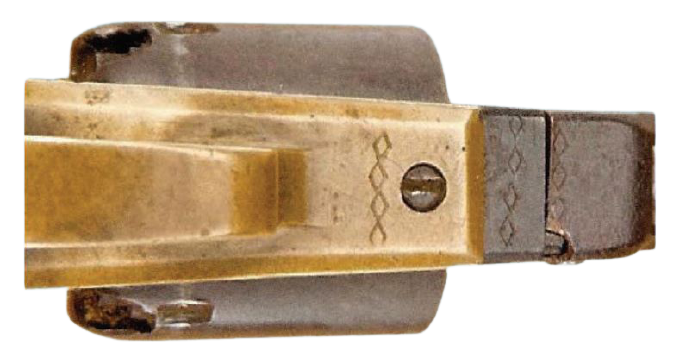 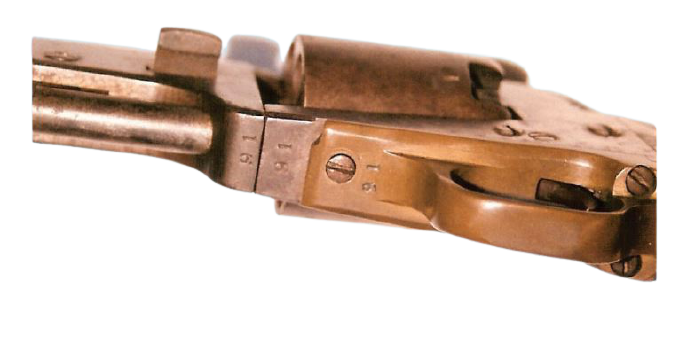 Figure 12 - e underside of Figure 11 showing the style and location of serial numbers.

Figure 14 - A typical early Dance, notice the at-bottomed trigger guard, a feature of low numbered Dances, this one is serial number 58

of Italy, specifically. Some were made with squareback trigger guards and some with rebated cylinders to discourage faking. Some, however, were quite accurate so one needs to be careful about acquisition. Fortunately there are numerous ways to authenticate real Dances of both types. We strongly advise any potential purchaser to consult an expert before purchasing any Dance revolver not previously known to the collecting fraternity.