THE FACINATING WORLD OF MINIATURES

Miniature weapons and related paraphernalia have been around for nearly as long as have the originals after which they are modeled. Incredible craftsmen, like the famous Swiss watchmakers, have been drawn to the challenge of miniaturization of firearms, blades, artillery and virtually anything else that represents the level of quality and complexity found in weaponry. In this column we will periodically look at the fine examples of this craft and the men who made them.

Tom P. Weston is one of the legendary makers of miniature firearms. His shop was in Mexico City, Mexico, and he sold all kinds of firearms and other antique weapons. Mr. Weston didn't actually make any miniatures himself, he had a small group of Mexican artisans who made the miniatures for him. Production of miniatures started probably just after World War II, and continued up until about the mid 1960's. The Weston shop produced many different miniatures including Colt Walker, dragoon, 1851 Navy, 1860 Army, and 1873 SSA revolvers. They also made a number of derringers including Sharps, Colt, Remington, and others. Some of his most sought after miniatures are the 1/2 scale Winchester 1866 carbines chambered in .22 short rimfire. Since the 1866 Winchester was chambered in .44 rimfire, this scales almost perfectly to the .22 short rimfire cartridge. Just like the fill size 1866, the miniature has twin firing pins and extractors. This is one of Mr. Weston's more ornate examples. It is an engraved and ivory stocked 1/2 scale Winchester Model 1866 saddle ring carbine with deluxe casing. Probably made in the 1950’s or 1960’s. The carbine is 100% fully functional and chambered to shoot the .22 short rim fire cartridge. 19 1/4" long overall with a 9 7/8" .22 caliber rifled barrel. Brass frame, side plates, cartridge lifter, crescent buttplate, and buttplate trapdoor. The frame, side plates, cartridge lifter, and buttplate upper tang beautifully and expertly hand engraved with scrolls & vines. The left side plate engraved with the Mexican eagle perched on a cactus, with a snake it it’s mouth. The balance of the metal parts are machined 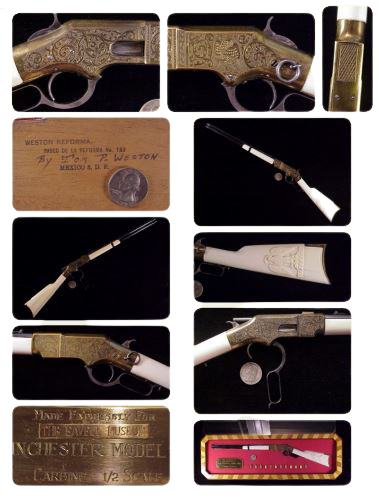