Finland was a part of the Kingdom of Sweden until 1809. At that time a vast majority of Finland was ceded to the Russian Empire. This area became the Grand Duchy of Finland. Taking advantage of the Russian Bolshevik Revolution, Finland declared independence in 1917. A few months later a civil war ensued between the Finnish Red Guards and the White Guard. The White Guard gained the upper hand during the springtime of 1918.

Finnish military weapons of this period were an assortment of old well used Russian rifles and small caliber pistols. Finland was supplied by Deutsche Waffen und Munitionsfabriken (DWM) in Germany with 100 LP.08 Artillery Lugers during 1917 or early 1918. Each Artillery Luger had a stock, holster, 2 magazines and 200 cartridges included:

The German surrender ended World War I in 1918 with the signing of the Versailles Peace Treaty. The Treaty established the “Inter Alliierte MilitarKontrollkommision” (IMKK). The IMKK established limits and restrictions for German military weapon production. The IMKK considered pistols with barrel lengths 4 inches (100mm) and caliber of 9mm to be military weapons.

In the early 1920s Finland tried to purchase Lugers from DWM in Germany. Because of the IMKK military pistol restrictions Finland was forced to purchase what collectors refer to as the 1920 Alphabet Commercial Luger variations which began production in 1921. These pistols were manufactured with a 3-3/4 inch (95mm) long barrel and chambered in 7.65mm Parabellum. The serial number system used with the 1920 Alphabet Commercial variations consists of a block of up to four numbers with an alphabet letter suffix. This variation also was commercially proof tested and stamped with the Crown Over N proof mark. The original small parts were numbered in the hidden commercial fashion.

The stamped SA within a small square border is the abbreviated property mark for Suomen Armeija, the proper ethnic name for the Finnish Army. The Army of Finland adopted a DWM Parabellum in 1923. The Finnish Army (SA) designation is the Parabellum Pistooli 23 (m/23). The Finnish m/23 Parabellum is a semi automatic pistol chambered in 7.65mm Parabellum with a 3-3/4 inch long barrel.

Finland purchased a total of 8,000 Luger’s from DWM in Germany. Pistols in the earliest shipments were delivered between 1923 and 1928 with serial number suffix ranging from k into q. Later pistols delivered between 1928 and 1930 had the serial number suffix ranging from r into t. In addition to the pistols DWM also supplied the surplus WWI flat board stocks as used on the German Army LP.08. 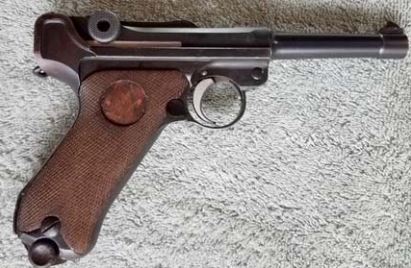 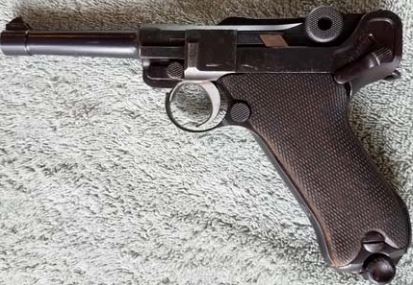 This displayed Finnish m/23 example has the commercial Crown Over N proof on the left side of the receiver adjacent to the inverted SA property marking. This m/23 frame serial number is 9276r which was probably manufactured in 1928. There is no marking over the receiver chamber. The center toggle link has the DWM logo marking. The wooden magazine knob has a SA property marking stamped above a non matching serial number. 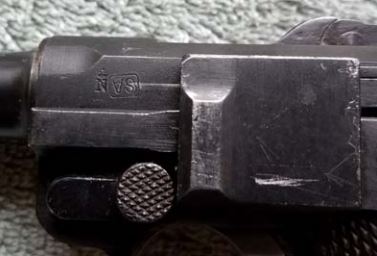 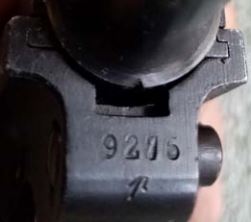 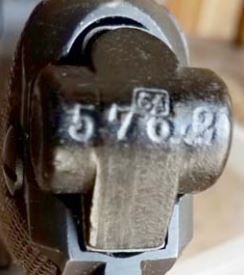 Except for the stamped SA property mark and counterbore recess on the right wood grip, the pistol is a 1920 Alphabet Commercial Luger variation. The grip counterbore recess was where a brass unit property disc was mounted. The Finnish Army (SA) initially utilized brass discs to mark their Model 23 (m/23) Luger. The brass disc located in the right grip identified a specific Finnish unit. The disc comprised the unit identifier and the company number. The discs were utilized from 1925 until 1940 when they were removed from the weapons for security reasons.

The Finnish weapons experienced hard usage and arsenal reworking. This Luger example is a typical reworked Finnish m/23 with mixed numbered parts. An additional rework feature on the underside of the breech block has an arsenal drilled hole for venting gas. Presumably the hole is to vent gas from a ruptured cartridge primer. The rear sight slot has also been machined from a sharp v to a wide u.

This Finnish Parabellum is displayed with a complete early m/23 rig. The Finnish m/23 Rig consists of a SA marked board stock, a SA marked early holster for board stock, the proper Finnish SA marked cleaning rod and a SA Sk.Y marked loading tool.

This is an unmodified original OULU holster made for the m/23 board-stock holster. The SA marked holsters manufactured in Finland by OULU are modeled after the German P.08 holsters. 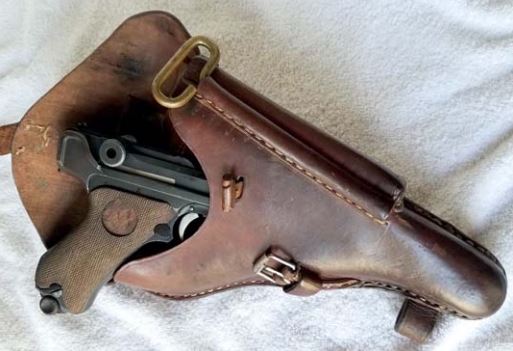 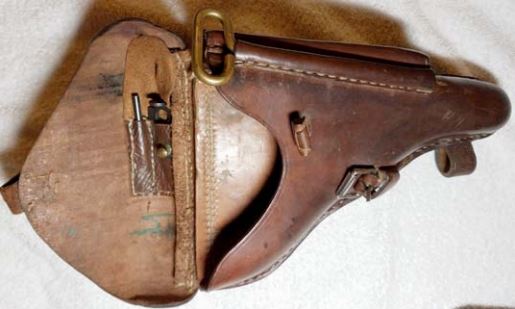 This unusual leather cradle strap configuration consists of two horizontal straps riveted to the back of the holster for restraint of the board stock and two vertical straps riveted to the horizontal straps. The holster mounting strap system is designed to be worn on a SA soldier’s waist belt. At the lower end of the holster is a leather toe strap loop for restraint of the stock attachment end. The rig arrangement allows the stock to be removed simply by lifting it out of the holster belt loop cradle and the lower toe strap for use on the m/23 Parebellum. 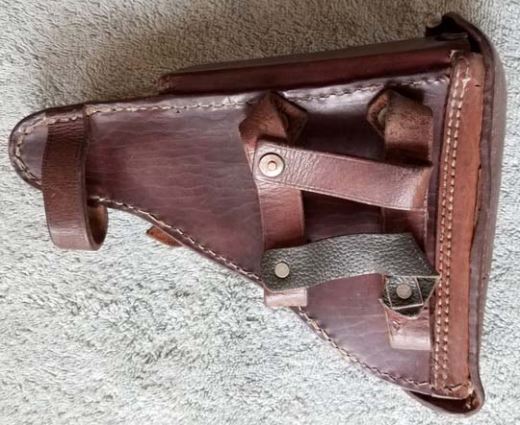 This m/23 board stock marked SA for Finnish Army and T for the Maintenance Depot. 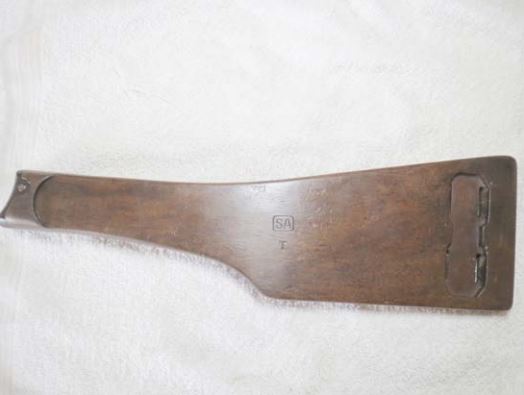 m/23 Board Stock Right Side

m/23 Board Stock Left Side

The disassembly and loading tool marked SA for Finnish Army and Sk.Y for the Civil Guard General Headquarters. 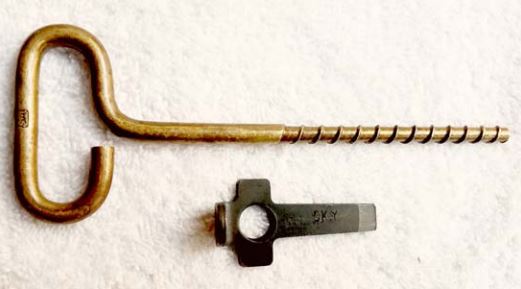 This is an example of the Finnish m/23 Parabellum complete with an early SA rig. These pistols were in service into the 1980s. While this pistol is a variation of a very common commercial Luger the Finnish application has a long history that experienced harsh usage. This application is a testament to the ruggedness and serviceability of the Luger pistol.

In the United States the National Firearms Act (NFA) defines a rifle with a barrel less than 16 inches in length as unlawful to possess. Generally Luger pistols with attached shoulder stocks fall within this rule. However the ATF has made exceptions to this rule for certain variations of Luger pistols. The ATF has listed the Finnish m/23 with the flat board stock as a proper combination and is exempt from the NFA short rifle barrel rule. This exemption was issued on Jan. 25, 2012, 903050:AG, 3311/2012-106. The exception is very specific:”Finnish m/23 Deutsche Waffen und Munitionsfabriken (DWM) manufactured Luger pistols with 95cm or 120cm barrels in 7.65mm or 9mm calibers with a German or Finnish manufactured wooden board shoulder stock.”

“The Luger Story” by John Walters