This article wraps up the series on Patent Circumventions which began with our first issue and continued throughout the first six tears of publication. If we seem obsessed with this period in arms development it is because we feel that it represents one of the truly seminal eras in arms development, albeit in a negative way. Smith and Wesson’s acquisition of the rights to Rollin Whites patent in 1855 not only stymied competition and arms development for the 17 year span of that patent restriction but it also bankrupted the inventor, Rollin White while making a fortune for Smith and Wesson.

The restrictions in pistol design imposed upon competitors of Smith and Wesson created havoc among those firms who were eager to enter the burgeoning market for revolvers. Those who chose to surreptitiously enter the market by ignoring the legal restrictions were sued and subjected to fines and/or confiscation of their wares. Poor Rollin White’s paltry commission ($.25 per gun) was overwhelmed by his legal costs in defending his patent (he should have read the fine print in his agreement with S&W).

From a collector’s point of view, the ingenious methods of avoiding the White patent, namely the feature of loading the chamber from the rear, resulted in a fascinating group of front-loading revolvers, most of which required special ammunition. Some of these systems actually became quite popular.

We have previously published several articles on these various circumventions, a list of which are appended to this article and are available to review in the “Archives” section of our website.

In this final segment, we look at some systems that were not addressed in previous issues or for which additional information had not previously been available.

Rollin White’s patent, Figure 1, shows a totally impractical design, a crude magazine hung on the side of a revolver. While the basic concept was not sound, the patent did contain a seemingly innocuous feature, the bored-through cylinder. Daniel Wesson noted this idea and contacted White to secure rights to his design. The rest is history. 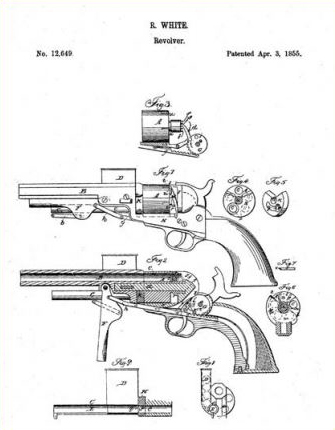 Figures 2 and 3 depict the original Rollin White Patent Model- Additional photos of this unique piece may be found in the Smith and Wesson book by Roy Jinks (see Further Reading) (Photos 2a and 2b from the Perry Hansen Collection, Photo 3 from the Texas A&M University Collection)

See the companion article in this issue by Jeff Goodson on these rare revolvers.

Silas Crispin was first and foremost a cartridge inventor. He designed, and with the help of Poultney and Trimble and the B. C. English firm manufactured separate-primed cartridges during the Civil War for the Maynard, Smith and Gallager carbines. At the end of the Civil War, he developed the peculiar cartridge which enabled Smith Carbines to be easily converted to fire metallic cartridges. 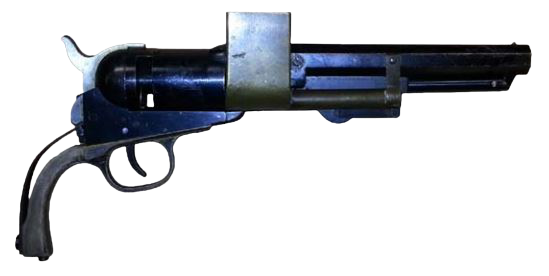 Figure 2a – The original Rollin White Patent Model, even down to the missing backstrap. (Perry Hansen Collection) 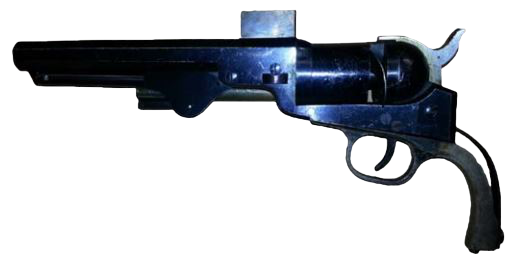 Figure 2b – The opposite side of the patent model. (Perry Hansen Collection) 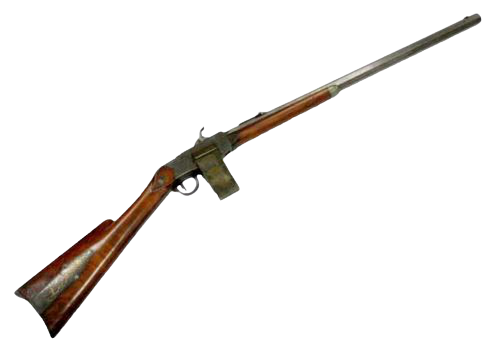 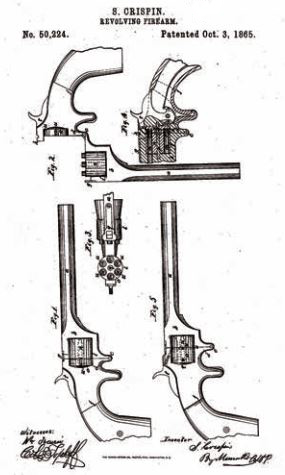 Figure 4 – Silas Crispin’s patent showing the adaptation of his unique cartridge design to revolvers. Notice how both of the versions illustrated here were actually produced as shown in the following figures. 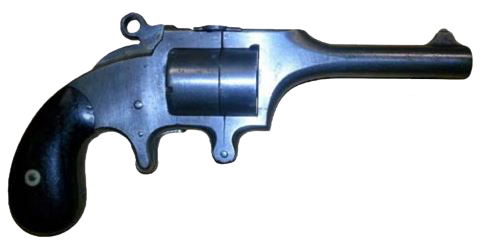 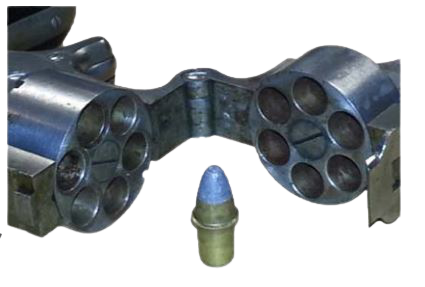 Figure 7 –The larger frame Crispin Revolver. Notice the different breakpoints of the cylinders between the small and large frame versions. (Perry Hansen Collection) 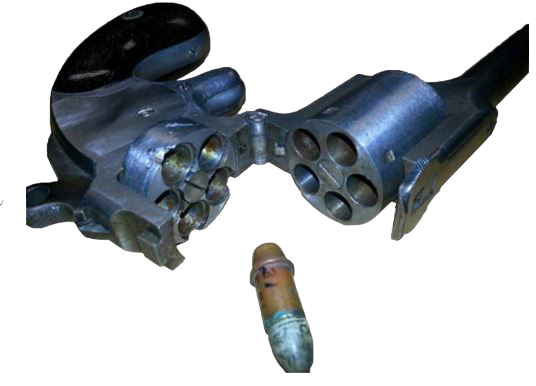 Figure 8 – The open action on the large frame Crispin Revolver with cartridge. (As a side note, from a cartridge collector’s point of view, both cartridges would rate 10 out of 10 on a rarity scale). (Perry Hansen Collection)

At some point, it apparently occurred to him that this cartridge design might be applied to revolvers, ones that wouldn’t infringe on the Rollin White patent. Possibly because of the relatively high cost and complexity of the peculiar cartridges, only a small handful were actually produced and those shown here may be the only survivors. (Photos 4 thru 9 from the Perry Hansen Collection)

Lucius Pond apparently wasn’t, at first, deterred by restrictions of the Rollin White patent. He boldly went forward with production of a rear-loading rimfire revolver that was a clear infringement on that patent. Smith and Wesson was not about to stand by and see their near-captive market be shared and took Pond to court. As a result, Pond’s unsold inventory was confiscated and turned over to Smith and Wesson. The confiscated guns were marked with the S&W stamping and were then sold by S&W. The story is told in detail in a pair of articles previously published in this magazine and referenced below.

Figure 11 – The consequence of being caught in a patent violation- many Pond revolvers were confiscated, turned over to S&W and marked as shown –“ MANUFACTURED FOR SMITH & WESSON” 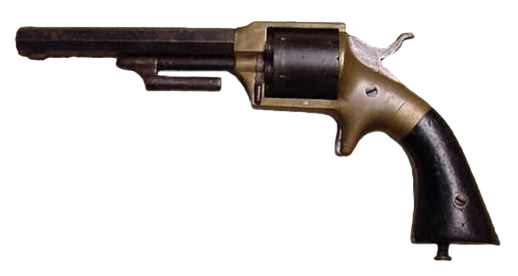 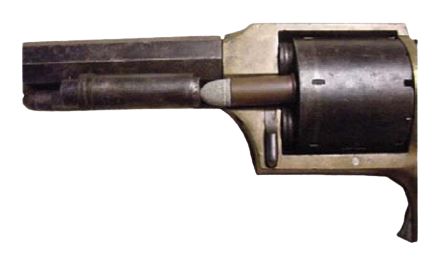 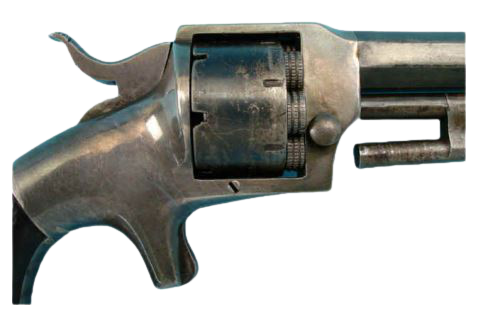 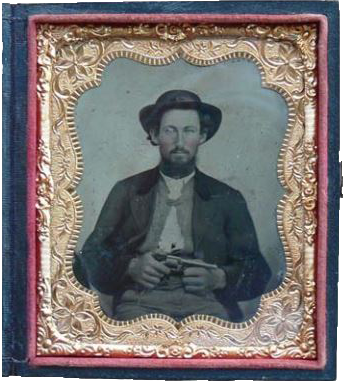 Pond then came up with a scheme to use regular .32 caliber rimfire cartridges and designed a revolver with removable sleeves that would permit loading from the front of the cylinder. Although Pond did succeed in avoiding infringement with his design, it was complicated to manufacture and difficult to load.

Another overly complicated revolver was the Stocum Revolver, individual forward-sliding chamber sleeves admitted .32 rimfire cartridges to be placed in the side cavities of the cylinder and slide backward to encase the rounds within the cylinder.

The flier, Figure 21, is a PR writers attempt to make this system sound superior, (lemons into lemonade)

A few of these revolvers were made with bores through cylinders but S&W, apparently, didn’t bother with a lawsuit.

and Infringements Cartridges for Front

Volume 6, Issue 6- Further on the Plant

CONVERSIONS AND OTHER PERCUSSION 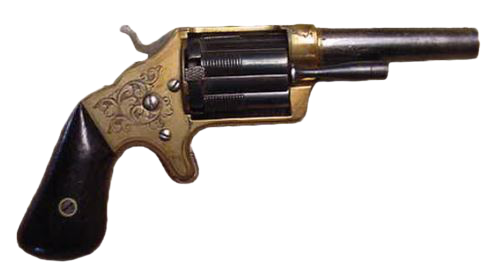 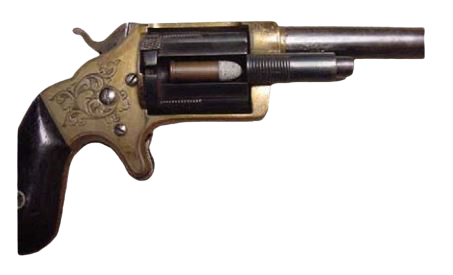 Figure 17 – Showing the method of sliding the chamber forward to accept the cartridge, (AHM Reference Collection) 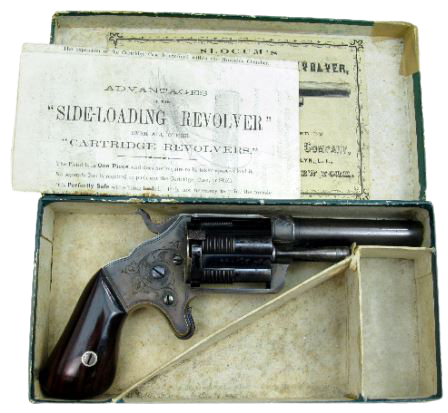 Figure 18 – Slocums were supplied in cardboard boxes – very few of which survived. The ivory grips on this specimen are unusual. 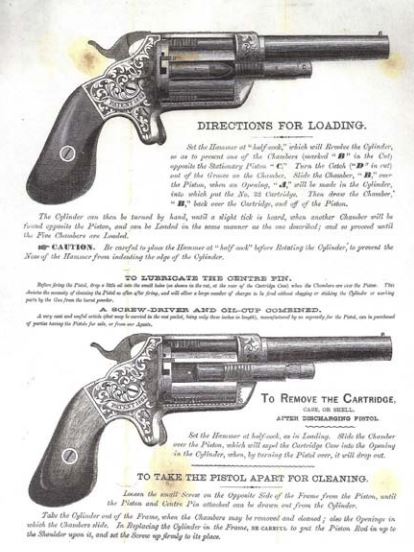 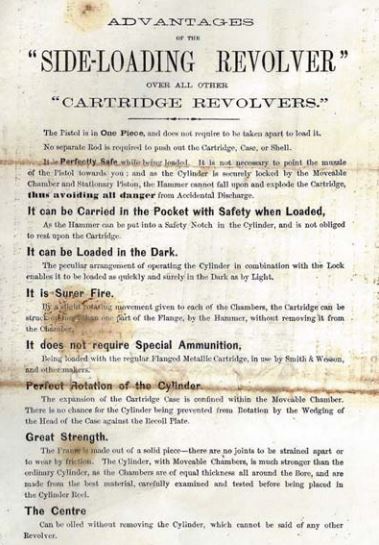 Figure 21 - In this ad promoting the “virtues” of the “SideLoading” revolver, one can’t help but think of the ad writers attempt to turn lemons into lemonade. (AHM Reference Collection)