They’re at it Again

Once again the Ivory crushers are at it. In an article in August, the Associated Press reported that two tons of ivory were crushed to dust in New York City in late July of this year. Included were priceless artifacts such as netsuke, one reportedly worth $14,000 and a pair of carved tusks with an appraised value of $850,000. Reportedly, Tiffany and Company partnered with the Wildlife Conservation Society on the “Ivory Crush”, an event proudly witnessed by Federal, State and City officials.

It makes me think of the uproar when militant Muslims destroyed ancient monuments in the Middle East.

Sort of like you getting a vasectomy because your neighbor has too many kids. 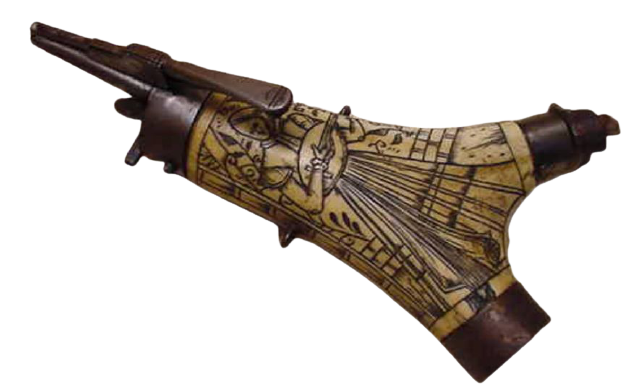 The word “Heritage” was chosen to be a part of our magazine’s name for a reason. Heritage is the unavoidable truth, whether it be our genetic heritage, that which makes us who we are, our cultural heritage, that which shapes our character and our life choices or the historical heritage which, for better or for worse, created the world we live in. It is not subject to revision and no amount of posturing, denial or ignoring it can change it.

You probably all collect arms or related items, if you didn’t, you wouldn’t be reading this. So, with the possible exception of target or hunting weapons, virtually all of the guns we collect probably have a nefarious historical connection in the eyes of some faction. Blaming inanimate objects for the sins of the past is as fruitless as destroying ivory objects. Like the ivory crushers, the removal of historical statues may give some a sense of momentary satisfaction, but once that feeling wears off, heritage is what remains.

A 16th Century Flask with a Troubadour playing a mandolin