Right off the bat, we need to acknowledge that we can and do make the occasional mistake...no, let’s say we sometimes commit the error of omission...which may come as something of a shock to some of our readers. So, in order to stifle the gasps of horror from those who found themselves making good use of grannie’s swoon couch, we offer the following...ahem...comments to right our wrongs:

Concerning our last issue, David Carroll notes the Smith and Wesson shown in Figure 2 of “Deplorable Madness” is a Model 2 Army, not a Model 1 1/2 (we should have known better); Charlie Pate tells us that the ‘61 Navy shown in Figure 1 of Tidbits is really a ‘60 Army, (again we should have known better since the Navy doesn’t have the cylinder rebate) and finally Lou Behling notes that the photo of the Warner box in Cartridge Hound which we identified as a .22 box is really a .30 short box (Lou may be the only man on earth who knows that Warner called their No. 1 cartridge a .30 short, not a .22 like everyone else, so were giving the proof reader a pass on that one). If Lou ever publishes his eagerly anticipated rimfire book, we’ll all know a lot more esoterica). Another sharp-eyed reader from the east coast noted that in Part V of “Evolution vs. Transition” (Volume 5 Issue 1) the author states that ‘After the war began, several Confederate armories and small arms factories were commissioned to make near copies of the ’60 Army and/or the ’51 Navy’ when in fact no copies of the 1860 Army are known to have been made by the Confederacy. Twenty lashes for the proof reader. 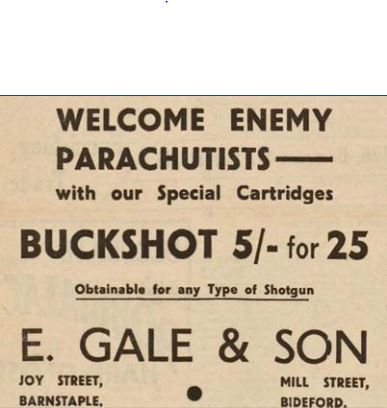 Courtesy of Jim Buchanan I’m not so sure that Nazi paratroopers would have been landing in north Devon, but who knows what Adolf Hitler was thinking in the early days of WW2. Regardless, this is a good example of British resolve at the time, although five bob for twenty five shot shells seems quite a stiff price. But then, what do I know? I was only a gleam in the old man’s eye at the time.

From Erik we received the following comments:

I always enjoy your magazine, especially those articles that give the background and history of particular arms. I purchased an old Peabody rifle manufactured by the Providence Tool Company in the late 1860s. As you probably know, the Peabody was the forerunner for the Martini-Henry and comes with quite a legacy. Your Arms Heritage is the best source for information on such firearms so I appreciate your work on behalf of collectors and historians.

...and we appreciate your comments as well as your custom, Erik; glad you find our efforts to be helpful.

It’s always gratifying to get feedback from our readers especially when they offer constructive criticism and suggestions as well as compliments. Such helpful words came from Nigel in New Zealand addressing the problem of downloading the large pdf file that AHM has become:

Just some quick feedback on the PDF version of the latest issue. Since these were first introduced (my suggestion I recall) they have been steadily growing in physical size. But this latest was a step too far at 60 MB! It was impossible to download over my iPad’s WiFi connection. I instead resorted to accessing it first on my PC (direct broadband connection) then plugging in my iPad and physically transferring it.

I’m fortunate to have software capable of ‘optimizing’ PDF files. Using that, I have reduced the file size to a more manageable 20 MB. The process of course lowers the quality, but not noticeably, and certainly not at the file’s intended tablet display size.

Hopefully, before too long we’ll have a solution to this particular problem. We’re working on it.