In a forthcoming issue, an attorney takes an indepth look at the famous Rollin White patent and the legal battles over the infringements and patents validity that roiled the arms industry for two decades. The article will also explore how Smith & Wesson used the patent to establish an empire, only to later denounce it and Rollin White himself. All of which had an impact on the development of arms during a critical period in our nation's history.

Having pored through hundreds of pages of testimony, legal opinions, minutes of Congressional committees and more, his conclusion shows that there is more to the story than has met the eye and history might well have been changed had there been different people making the critical decisions. This rather lengthy article will be provided in two parts.

We addressed the circumventions and infringements of the patent held by and fiercely protected by Smith & Wesson in our very first issue of Arms Heritage Magazine, and the proposed article will certainly add another chapter or two to the story, especially as it embraces a large element of 'what if...'.

Recently I received an email that included three rather interesting questions; questions that evoke not a little nostalgia and a lot of memory searching - not easy things for those of us with hairlines receding at about the same alarming rate that recollection of our personal history is fading.

The first of these questions is, 'I wonder if you can identify the oldest thing in your possession. I'm not talking about the most ancient, but rather the thing you've had the longest. Can you remember when and where you got it and why you've held onto it all these years?'

The next question asked is, 'What happened to all of those things you owned before that? All of those do-dads and treasures that have disappeared that represent personal nostalgia and would probably make some collector of whatever happy today if they turned up.

In response to the first question, our correspondent offered, 'For me it is an old brass buckle that I found in the attic of my old fraternity house. It has seen numerous belts over 60 years and I still wear it although there is nothing special about it.' There was no response to the second question.

So I set my mind to thinking and then to looking around this old bunkhouse to see what stuff from way back when is still in my possession. This presented no difficulty at all - I really didn't even have to search for it, as it is safely tucked away in my mother's memory box which was given to me upon her passing. Inside is my original birth certificate dated within a week of that monumental moment when I came grizzling and whining into the world ten months before the United States entered World War Two. But if I have to split hairs and admit that actually my parents were the original owners and that the piece of paper only passed to me in 1986, then the items that truly are those I have owned the longest are my General Certificates of Education (Ordinary Level) gained during my last year (1957/58) of high school in the Old Country. Pretty mundane considering the wonders I have held in my hands since.

As to what happened to everything else prior to that (and much of the stuff gathered subsequently in the decades following), it all more or less fell victim to moving from one to another of seventeen or eighteen different addresses in four countries, three marriages, two divorces and a year working on Brent Delta in the North Sea.

But since then, I have more than made up for the losses in gathering a few old guns and related paraphernalia over the past twenty or thirty years.

An when one thinks about it, such is the nature of collecting. Things come and go, one or two bits and bobs, odds and sods hang around forever. All of LThe last Word them treasures at some time in the past, a few of them bringing back memories - fond or otherwise.

But it would be interesting if our readers were to look around among their treasured (and not so treasured) possessions and tell us what it is that they have held onto the longest, and also what happened to all those other essential and must-have things that have long since disappeared.

Great News! - The Virginia Senate Committee for Courts of Justice voted 13-0 to strike the recently introduced Virginia State Ivory Ban bill, SB 1215, at the request of sponsor Senator Adam Ebbin (D-30). Ebbin made the request after an alliance of organizations opposed to the bill helped make it clear to the committee members that it was terribly problematic for honest, law-abiding Virginians, stealing millions in value from them, and that it would not save a single living elephant in Africa.

When allowed the opportunity to explain the facts involved and the reality of the illicit trade in elephant ivory, in which Americans have virtually no involvement whatsoever, we have a good chance of changing the minds of those who have been mislead by emotionally charged and politically motivated efforts to ban legal elephant ivory that's been in the country for decades and mammoth ivory that's 10,000 years old.

Light at the End of the Tunnel?

There is a pending bill, proposed by Alaskan Congressman Don Young that seeks to introduce some sanity into the ban. Please read the attached sheet and send a letter to your Congressmen supporting H.R.697

I just received an email with some positive news from the Elephant Protection Association on the 'ivory ban' situation. Rather than my attempting to paraphrase, I show the full text of the message below:

Act of 2015, HR 697, would effectively end the U.S. Fish and Wildlife Service's draconian and unilateral moratorium on the sale and trade of lawfully possessed ivory, while also making significant efforts to assist anti-poaching efforts in countries with elephant populations.

"This bill is a balanced and comprehensive approach to targeting the trade of illegal ivory without penalizing the millions of Americans who legally acquire or already own products containing ivory," said Congressman Don Young. "The U.S. Fish and Wildlife Service's ban on moving ivory across international and state borders wrongfully penalizes countless Americans and institutions who have legally obtained musical instruments, firearms, jewelry, and pianos containing elephant ivory, but does little to nothing to prevent the poaching of these animals. The impact of this ban, which affects Americans from all walks of life and destroys the value of countless family heirlooms, has already been significant. My legislation works to alleviate the pressure placed on these legal ivory owners while increasing the enforcement presence, training and anti-poaching efforts in countries where elephant populations exist."

"This legislation will help crack down on illegal poaching through proper use of the U.S. Fish and Wildlife's authority across borders, while maintaining protections for legally harvested ivory," said Congressman Collin Peterson. "This is a multipronged approach, rather than an all-out ban, which is necessary to conserving African Elephants and ensuring that countless legally obtained antiquities can be preserved."

The introduction of this bill comes in direct response to the Director of the U.S. Fish and Wildlife Service's February 25, 2014 unilateral decision to implement a ban on the importation, exportation, or interstate sale of lawfully possessed ivory. The Director's Order has destroyed the value of classical instruments, certain firearms, knives, chess and pool sets, and other items without providing any conservation value to African elephants. Congressman Young introduced similar legislation in the 113th Congress.

The bill would specifically allow:

• Lawfully possessed, raw or worked ivory to be imported or exported for museum displays and personal use;

• The Secretary of the Interior, in coordination with the Secretary of State, to place a U.S. Fish and Wildlife law enforcement officer in each African country with significant elephant populations;

• The Secretary of the Interior to certify any country found to be a significant transit or destination point under the Pelly Amendment to the Fishermen's Protective Act;

• The continued importation of Sport-hunted elephant trophies from populations listed on Appendix II of the Convention on the International Trade in Endangered Species;

• For the reauthorization of appropriations of not more than $5 million for each of the years 2016-2020, and for these funds to be prioritized for projects designed to facilitate the acquisition of equipment and training of wildlife officials in ivory producing countries for anti-poaching efforts. 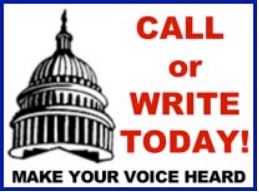 Or, you can use the Open Congress website at: https://www.opencongress.org/bill/hr697-114/

Here's a model email that you can use. We suggest you keep it simple and to the point:

I support H.R.697, the African Elephant Conservation and Legal Ivory Possession Act of 2015. I urge you to become a co-sponsor of this common sense legislation that will protect my property rights and also help protect elephants in Africa. Punishing American ivory owners by taking the value of their investments in legal ivory will not do anything to stop the slaughter of African elephants, which only feeds the illegal ivory trade in Asia.