By Frank Graves It was February 4, 1864 and the Colt factory was burning. Among those immediately thinking of the potential of sudden new business for revolving pistols was a group of gunmakers and investors from New York, headed by William J. Syms and Samuel R. Syms. Within three short weeks they would establish the firm of The Metropolitan Arms Company with five partners to capitalize on the possibility of producing revolvers for which there was a tremendous desire at that time. The Civil War was going on, but there was significant business for various arms makers, who, second only to the products of Colt, were in the business of providing. Who knows exactly what was in the minds of the principals of The Metropolitan Arms Company, but one could easily guess that the possibility of patent infringement lawsuits by Colt would be diminished as they would be devoting their entire focus to rebuilding the Colt factory. Apparently a good case for making hay while the sun is shining!

Since the late 1840s, Samuel Colt had legally pursued those producing revolving firearms that he felt violated any of his many patents. Most of the larger firms infringing on Colt’s parents during this time were successfully sued and forced to either close or alter their products to eliminate the use of Colt’s patents. The incorporators of The Metropolitan Arms Company on February 24, 1864 must have had this in mind when they decided to provide $100,000.00 of capital to finance this operation. In today’s dollars, this amount would be in the millions. As it would later turn out, this was not totally a good bet as the demise of the percussion era would soon be imminent.

The Metropolitan Arms Company was made up of five principals: William J. Syms, Samuel R. Syms, John S. McChesney, John J. Serrel and Charles B. Hart. It has long been thought that Orison Blunt, of Blunt & Syms fame, was the quiet man behind this firm. He had the experience and financial wherewithal and, with these previous associates, would have made for a very good leader for the team. And the Metropolitan factory was in a building owned by Orison Blunt that had been used for the manufacture of muskets. There is a great deal of study into the origins of The Metropolitan Arms Company by Waldo Nutter that was published in The Gun Report issues of August and September, 1967. Those interested in the history of this interesting company should read this detailed article as well as one by James B. Whisker entitled “Orison Blunt of Blunt & Syms” that we published in Volume 2, Issue 1 of this magazine as additional background. This article will attempt to describe the three models of .36 caliber revolvers manufactured during the short period of existence of the company and their variations and production figures as well as other features.

But for minor differences that were no doubt done on purpose, all of these are so close in appearance to the Colt models that one has to really study them to ascertain the difference. We will describe them as follows: when we refer to Models 1851, 1861 and 1862, we are referring to those corresponding to the models by Colt. To the knowledge of the writer, the Metropolitan did not have names for their versions of these revolvers.

As will be seen, The Metropolitan Arms Company was able to proceed with their marketing without any interference from Colt relative to patent infringement, so their bet, at least that part of it, was a good one. As will also be seen, with the expense for the amount of tooling and set up that would have to have been done, it would seem like the total relatively low production would have made any real profits unlikely.

The Metropolitan 1851 Navy was the first of the three different models to be produced. The first model of the Metropolitan 1851 Navy was totally unmarked except for serial numbers. It is almost identical in appearance to the Colt Model 1851 Navy, Third Model and the collector has to really look close to see the differences. As with the Colt, it had a 7-1/2” barrel and a cylinder of six shots. Interestingly, there are a few of Colt’s patents that were observed such as no lead ins to the cylinder stop slots on the cylinder and recesses in the rear of the cylinder to engage the hammer between the nipples as a safety instead of the Colt patented cylinder pins. There are a few features that are changed on the later second model such as a larger and thicker trigger guard bow and change in direction of the loading lever plunger screw. The First Model started at serial number 1 and went up to serial number 63, at which point 1,100 was added to the serial number, making the next serial number within this model 1164. Someone with the company apparently decided that production needed to be “boosted” for marketing purposes, so from then on all 1851 Navy revolvers had a 4-digit serial number. Within this First Model serial number range, we see a few revolvers marked by H. E. Dimick of St. Louis, Missouri. Early in gun collecting it was thought (maybe because it sounded better) that Dimick marked guns were to be considered Confederate. We now know that these revolvers were nothing more than unmarked first model 1851 Metropolitans, sold to Dimick who marked them with their name and sold them in St. Louis, Missouri. There was a study of serial numbers of these done by Sam Smith back in the 1940s and 50s that is recounted in The Gun Report Nutter article that shows a range for the three known styles of Dimick markings to occur from about serial number 1174 to 1621, but not sequentially. It is the opinion of this writer that this was a widely spread out number of guns sold to Dimick at different times and that there will probably be other numbers now known that are outside of this range. They do represent an interesting variation.

At about serial number 1800 we see the Second Model being produced which is basically the same gun except the barrel is now marked with the company name: “METROPOLITAN ARMS Co. NEW-YORK” and the cylinders now have a rolled scene, similar to the Naval battle scene of the Colt Model 1851 Navy, except this scene is of the Battle of New Orleans.

There are variations in grip shape, location of loading lever rammer screw and a few others that one would think as entirely logical due to the less than high production that would have resulted in more consistency. It had been theorized that the initial revolvers may have been unmarked to avoid easy detection that these were unauthorized Colt copies, or perhaps that they were in a hurry to produce without having to wait for a die maker to come up with the die for the barrels. The writer tends to believe the former. Total production of the Model 1851 has been estimated at slightly more than 6,000 revolvers of both types.

The Metropolitan Arms Company apparently decided that due to the popularity of the round barreled Model 1861 Colt Navy revolver, that they might as well go ahead and copy that one too, so they did that for a curiously short amount of time. These were produced during the production of the Second Model 1851, due to the barrel mark and the cylinder markings. These are very rare with only an estimated 50 revolvers being made between serial numbers of about 2300 and 2350 of which only 2 surviving examples are known by the writer, but likely a few more must exist. As there are no known Model 1851 revolvers in this serial number range, the factory apparently changed gears for a short time to produce this round barreled model before

resuming production of the octagonal barreled Model 1851. These 1861 Metropolitans are very similar to the corresponding Colt Model 1861 Navy with the most prominent exception being the loading lever. The Colt had the patented creeping rack and pinion loading lever while the Metropolitan had a hinged lever that is held by a screw through the barrel lug. Maybe easier to produce and avoids the patent, but one would think that with continued use, a burr would rise internally and the operation of the lever would have been impaired. This model, again like the Colt, had a 7-1/2” barrel. 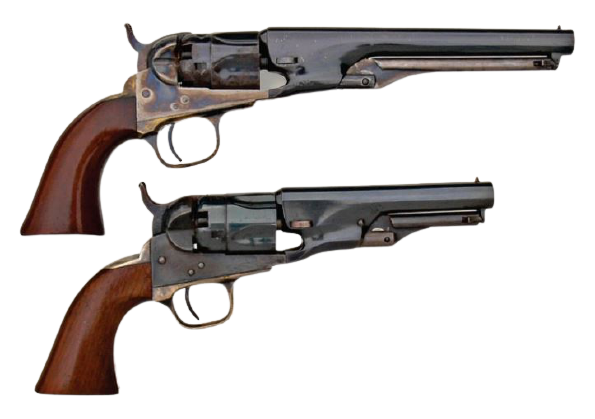 It is thought that the Model 1862 was produced about the same time as the production of the First Model 1851 due to the similar lack of markings initially. The serial numbers for this model start at 1100, with no earlier or one or two digits numbers known, so the higher production appearance had already been decided on when this revolver was produced. The unmarked variation appears between serial numbers 1100 and 1800 and then again between about 1950 and 2400. There are Metropolitan marked 1862 revolvers between serial numbers 1800 and 1950, then again at 2400 to 3850. It is thought that perhaps the die broke at number 1950 or so to about 2400 and then a new die used for the balance of production. It is estimated that there were a total of approximately 2,750 revolvers of this pattern produced by the Metropolitan Arms Company.

As with the corresponding Colt Model 1862 Police, caliber was .36 and the same three barrel lengths were offered: 4-1/2”, 5-1/2” and 6-1/2”. And as seen in the round barreled 1861 Navy by Metropolitan, the lever is secured with a screw through the barrel lug. Some of these were sold to the Union Arms Company of New York who reportedly marked the barrels as such. 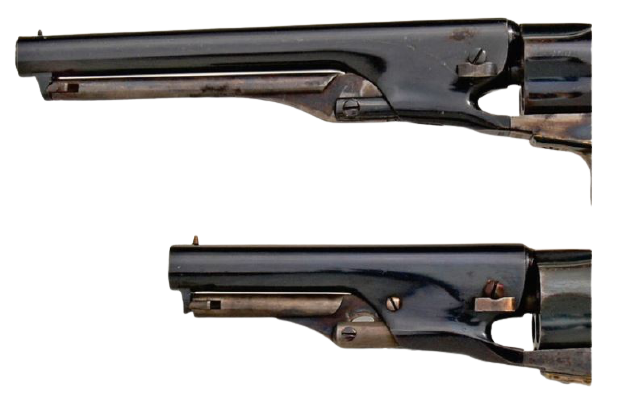 Comparison of barrel lugs and loading levers. Colt 1862 on top and Metropolitan 1862 below.

One would think that the company would have offered knock offs of other currently manufactured and popular revolvers such as the Model 1849 Pocket in .31 caliber as well as the Model 1860 Army in .44 caliber, but there has been no evidence of either having been produced. 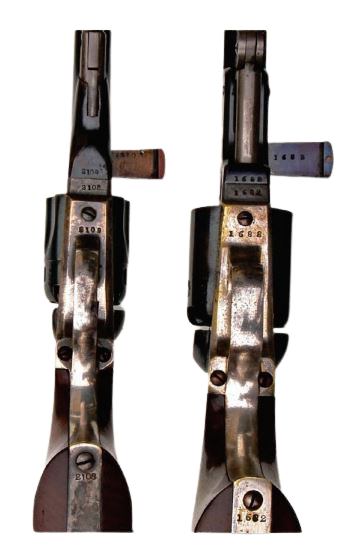 As seen with the Colt revolvers of the day, the standard finish of the Metropolitan revolvers was blued cylinder and barrel, case hardened loading lever and frame and silver plated brass backstrap and trigger guard. Of the few engraved examples of the 1851 and 1862 models that are known, they are usually silver plated, but some are also nickel plated. There is also an engraved example of the Model 1862 (serial number 2121) that is blued and case hardened. From the two unfired examples shown here, a First Model 1851 Navy and a First Model 1862 Police, the quality of finish is apparent, but the blue is thinner and will tend to wear off much more quickly than the blue on a Colt revolver made at the same time. 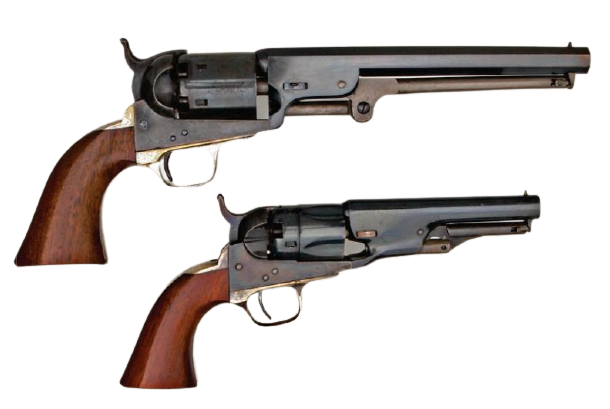 There are known examples of engraving on Models 1851 and 1862, but none known on the Model 1861 round barreled Navy. The engraved examples usually have a front sight of a german silver blade in a dovetailed base as opposed to the usual pin front sight. It appears that the engraving of the Metropolitan revolvers was executed by Gustave Young or other New York engravers as the treatment of them is virtually identical to that seen on the corresponding Colt revolvers. 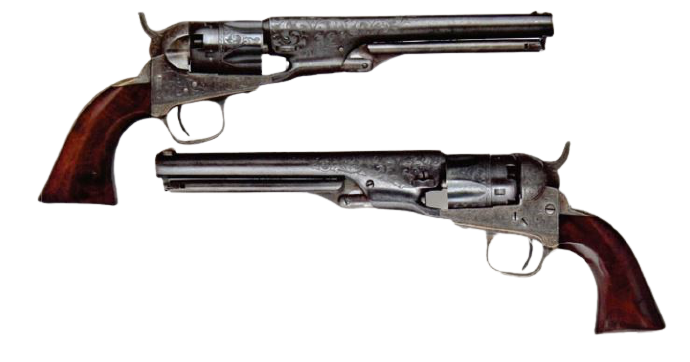 There are a few known cased Metropolitan revolvers in New York mahogany cases. As there were casemakers there in New York and since it would be very unlikely that Metropolitan would have produced their own, one of these cases would certainly be considered as proper for the Metropolitan as well as the corresponding Colt. 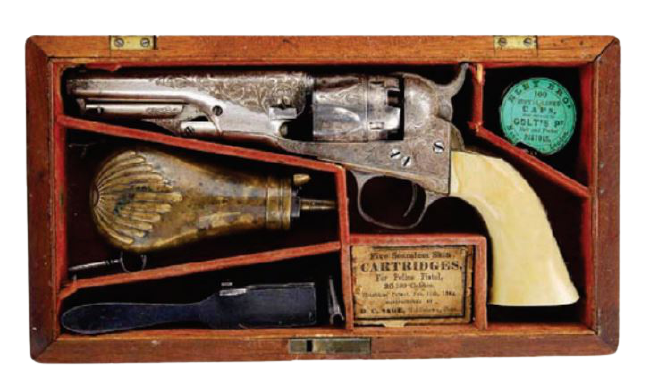 As with the Colt products, some of these were sent to England for sale and show the typical proofs seen on Colt products. 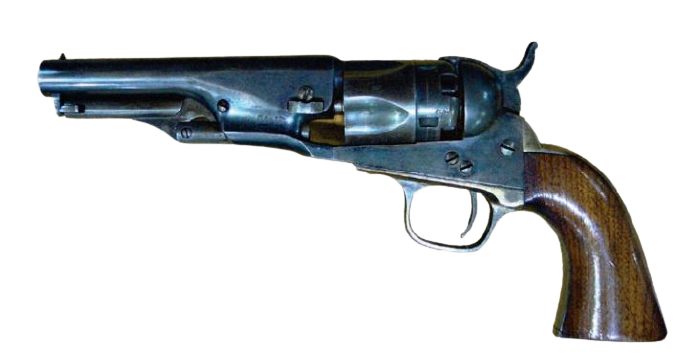 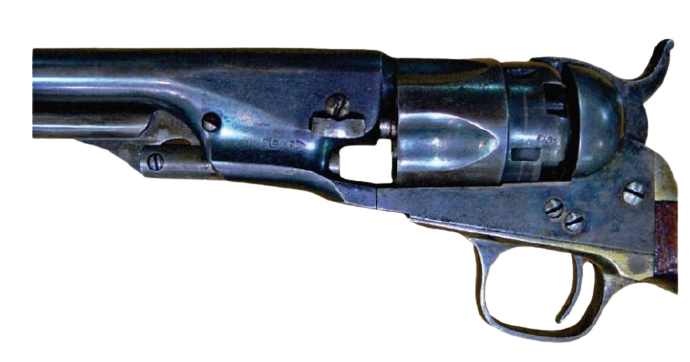 All revolvers owned by the writer except as noted.

Many thanks to the following: