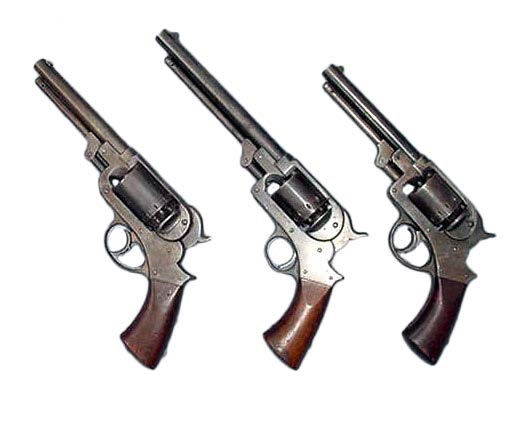 Just prior to the American Civil War, many innovations in firearms, especially revolvers, took place by reason of the intense competition in America of many gunmakers to satisfy the need for better and better firearms, and because some people sensed the growing possibility of a civil war which would make for a quick market for such firearms. The established and prominent revolving pistol makers of the time, Colt and Remington, had not only innovated manufacturing techniques with much success, but were constantly improving their products to keep up with and ahead of the competition from the myriad of other contemporary makers as well as new makers.

In anticipation of the expiration of Colt’s patent in 1857, numerous hopeful inventors were devising their own ideas of what a military percussion revolver should look like.  Some designs were practical, some plain bizarre.  Eventually, no matter how impractical, many were purchased by the federal government (much to the delight of today’s collectors).

Eben T. Starr, possibly to distance himself from Colt and Remington, opted for a self-cocking design.  Although more complex and therefore more costly, this design seems to have worked, as will be seen from the testing reports and subsequent purchases.

The Starrs were among some of the most interesting percussion revolvers of the Civil War period. There are two variations of the Army Revolver in .44 caliber, and a single variation of the Navy Revolver in .36 caliber.

Eben T. Starr of New York, New York envisioned and received two patents for his “self-cocking” percussion revolver on January 15, 1856 (U.S. Patent #14,118) and December 4, 1860 (U.S. Patent #30,843).  Interestingly, the first patent of 1856 showed an operating mechanism for a pepperbox type of pistol.  It has to be remembered that at this time, the multiple barreled revolving pistol known as the “pepperbox”, because of its general resemblance to a kitchen-used pepperbox in the same period of time, was a very popular and inexpensive firearm that was favored by many.  The pepperbox pistols made by such prominent makers as Ethan Allen and many others were cheaper and more widely used than revolvers such as those made by Samuel Colt, etc., so it is entirely logical that Eben Starr first envisioned an improvement that could compete with the more popular pepperbox pistols that were being made by those other companies.

This first patent of January 15, 1856 showed a pepperbox type barrel group attached to a frame that had two operating triggers which would cock the revolver and rotate the barrel group.  The front trigger served to cock the hammer and rotate the barrel group, and the rear trigger released the hammer, causing it to strike the percussion cap on the nipple, thus discharging the pistol.  Although no examples of a Starr pepperbox are known to exist with this “improvement” (it has been hypothesized that there were a few produced and submitted for trial by the U.S. Navy in 1857), the mechanism would serve the action for a standard revolver, i.e. a rotating cylinder, in the first produced revolvers of the Starr Arms Company of New York City in the form of the Model 1858 Self-Cocking Army and Navy Revolvers where this same two trigger concept was used.  This patent date was marked on all three variations of the Starr revolvers.  For the sake of simplicity, we will refer to this model as the Model 1858 Double Action Army Revolver.

The second patent date of December 4, 1860 covered the typical revolver with a revolving cylinder detailing such other improvements as the forked topstrap that hooks over the top of the frame forward of the hammer, allowing the barrel to be tipped down for cleaning and access to the cylinder.  There were other features of this patent that dealt with spring arrangement, cylinder locking and other internal features not visible outside of the revolver.  This patent is significant as it noted the caliber as .36 in the improvements.  This later patent date was never stamped on any of the three variations of the Starr percussion revolver.

The first type of revolver produced by Starr Arms was probably the Model 1858 Army revolver in .36 caliber discussed above, followed very shortly thereafter by the .44 caliber version. Some collectors disagree as to which came first, but all agree that they did arrive in rapid succession.  Both types, with six inch barrels, were six shot revolvers equipped for double action and self-cocking use that had as a part of the forward trigger a sliding portion that would either allow this trigger to completely cycle the revolver to the point of firing, or selected otherwise, cock the revolver thus holding it at full cock.  This necessitated the shooter to then move his finger to the rear trigger where pressing it would release the hammer to fire the revolver.  Even though there is a standard spur on the hammer, the revolver cannot be cocked by pulling back on this spur.  Its sole purpose is for the shooter to be able to safely return the hammer down without firing the revolver.

It has been estimated that approximately 3,000 Double Action Model 1858 Navy Revolvers and 23,000 Double Action Model 1858 Army Revolvers were manufactured from about 1858 to about 1863.  Most were to satisfy a contract to the United States Government after the Civil War had begun.  Most of the .36 Navy Starr revolvers seen today are not government inspected while most of the .44 Starrs seen show inspection marks.  Although superficially they appear identical, they are actually quite different; the most obvious difference being the area in front of the cylinder where the part of the lug where the ball would be put to allow the rammer to seat it into the cylinder.  The Navy revolver has a pronounced and more rounded look to the barrel lug.  Compare below: 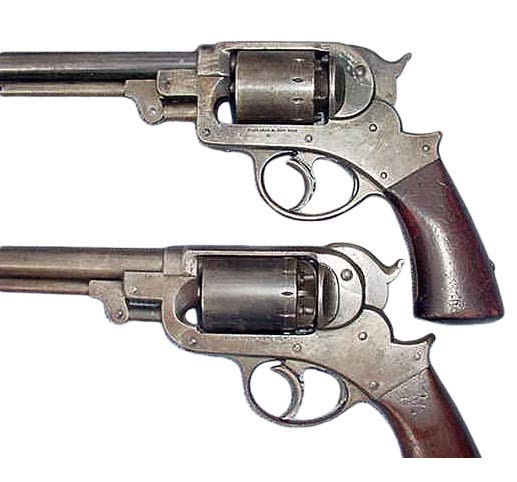 A comparison of the .44 double action Army (above) with the .36 double action Navy.  Notice the difference in cylinder and frame design.

In about 1862 the Army’s procurement department was concerned about the disparity of price between the Starr Army at $25.00 each against the unit

prices for Colt and Remington at about half of that amount.  After approximately 3,000 of the Double Action Army contract guns were delivered by March of 1862, the Starr Arms Company was asked to lower the price.  According to Ordnance Contracts and Records, another 13,000 were delivered at $20.00 each. Sometime before this, after many attempts by the Starr Company to avoid it, they were forced to begin retooling in order to deliver a much simpler Single Action Model, which ultimately did happen with a unit cost of $12.00.  This redesigned revolver is known as the Model 1863 Single Action Army revolver.  All were in .44 caliber, had 8 inch barrels and employed the simpler single action, as we know it today.  According to Ordnance Contracts and Records, 25,000 of these Single Action Army revolvers were delivered between December of 1863 and December of 1864 and there were also some sold into the civilian market.

All types have a hinged frame that once a thumb-screw is unscrewed and removed allows the frame to pivot downwards, releasing the cylinder for cleaning as well as the accessing the barrel for the same purpose. 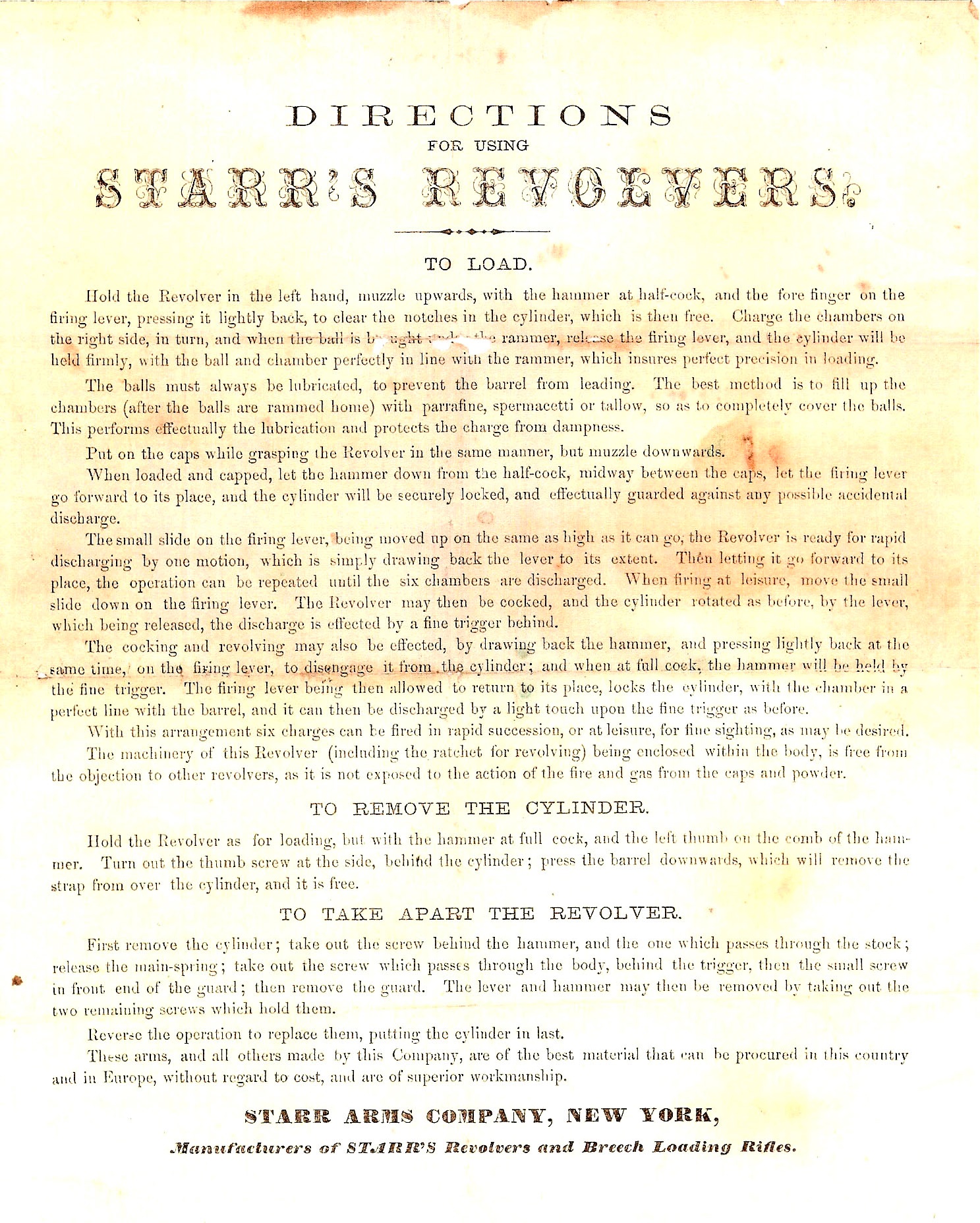 The cylinder does not have a cylinder pin, but a small projection in front that turns within a hole in the barrel and the rear of the cylinder is similarly is supported in the frame where the ratchet to revolve the cylinder is.

Certainly, the Starr Arms Company would much rather have their higher priced contract stay in place with their existing tooling, and must have resisted making a change of this expensive retooling with a lower unit cost to the government.  There are several glowing testimonials from military figures as to the advantages of the Double Action revolver.  One interesting testimonial was from Lt. Colonel Alexander Shaler who wrote to Everett Clapp, Treasurer of the Starr Arms Company on July 8, 1861 that the Starr Double Action was:

“…the best weapon of the kind, I have ever practiced with.  For the extent of range and accuracy of fire, it certainly has no equal.

The mechanism to my mind is perfect, and I have looked in vain for some place where an improvement might be suggested.  Satisfied that you have presented to the public the Ne plus ultra of small fire arms, I trust that you receive from that public, such evidences of appreciation, as will ensure a liberal remuneration for your most valuable invention.”

The .44 caliber single action Army, by far the most popular with the troops 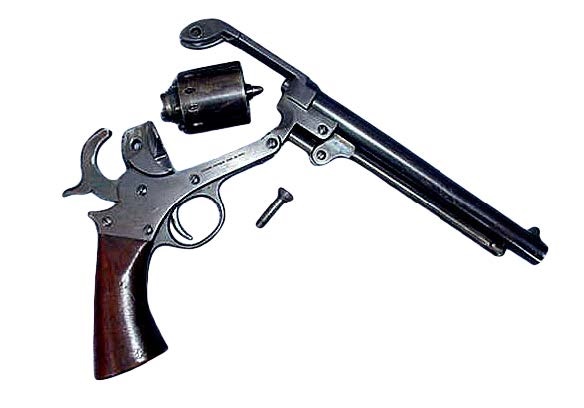 The Starr Arms Company also provided breechloading carbines, both percussion and cartridge, to the Union government towards the end of the Civil War and went on later to make cartridge derringers including a four-shot version in .32 caliber rimfire, and a  single shot version in.41 caliber, examples of which are shown in the picture below. 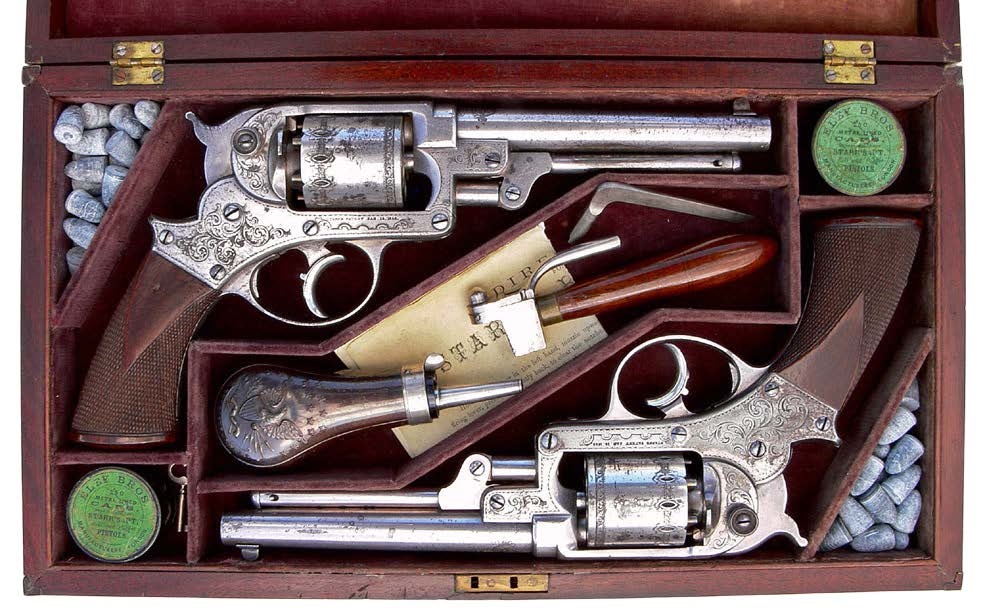 At the end of the Civil War, most Starr revolvers were sold to firms like Stokes-Kirk, etc.  Here are two that weren’t. 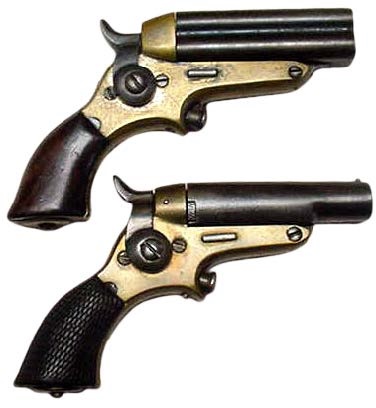 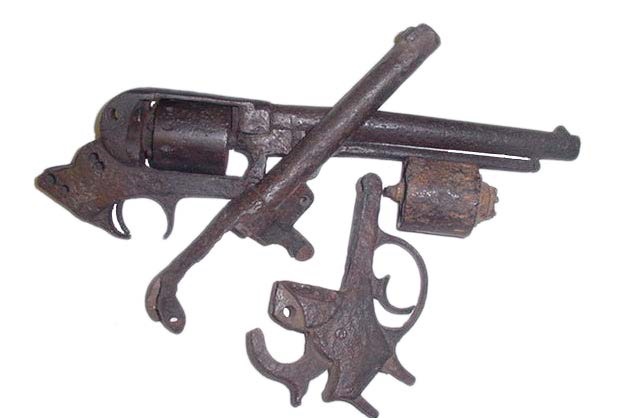