THE “WHEEL OF CARBINES” PHOTOGRAPH 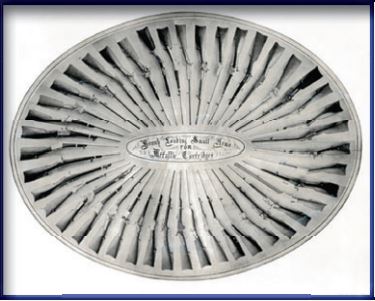 Collectors of U.S. military arms are familiar with the photograph, oval in shape, of the carbines supposedly tested by the Army Ordnance Board of 1865 (called the “Laidley Board” from it’s chairman’s name). Titled in its center “Breech Loading Small Arms for Metallic Cartridges,” it pictures 44 carbines arranged around its periphery with the muzzles pointing inward. The history of this photograph is discussed here.

As expected, the original photograph dates from 1865. The following article from the Springfield Republican newspaper, dated June 18, 1865, explains the photograph’s origin:

“The government has had a photographer employed at the armory for several months, who has made some excellent pictures of the houses, shops, grounds, &c. All the breech-loading muskets presented for the inspection of the military commission, lately in session in this city, were photographed, and the pictures make a very nice oval picture, a dozen duplicates of which Major Laidley has sent to the Chicago sanitary fair. Everything connected with the breech-loading of each of the guns has been photographed in its parts, and copies preserved here, while duplicates have been sent to Washington.”

Thus, it appears that Major Laidley had the dual purpose for the photography: recording the details of the breech loaders that were tested and also of providing Ordnance Department “advertising” to the Chicago fair participants. At that time, holding a “sanitary fair” was a popular way of raising funds for the support and relief of Union soldiers. Chicago held such fairs starting in 1863. At the 1865 fair, after the war’s end, the objective was to raise funds for hospital support, hospitality supply and helping soldiers get back pay and pensions.

The oval was made by assembling individual photographs into the wheel motif. In the 1960s, well known arms dealer Norm Flayderman accessed an original photograph assembly and published the famous “Wheel of Carbines” on the cover and frontispiece of his reprint of Fuller’s “The BreechLoader in the Service 1816-1917.” This is the image with which we are most familiar today.

Interestingly, the photograph includes two carbines which were not tested by the 1865 Ordnance Board; these carbines must have been available at the Springfield Armory after the Board’s conclusion on April 6 but before mid June. The Johnson (Armstrong & Taylor) carbine is not mentioned in the report. The Miller carbine is not mentioned but a similar musket was tested. Further, there were several unique rifle muskets tested by the board, photographs of which would have been to big for the “carbine” oval. These include metallic cartridge arms by Berdan, Chabot, Geiger, Gray and Hayden.

Knowing the publication date of the “Wheel of Carbines” allows researchers to better understand the timeline of breech loader development in the post Civil War period. 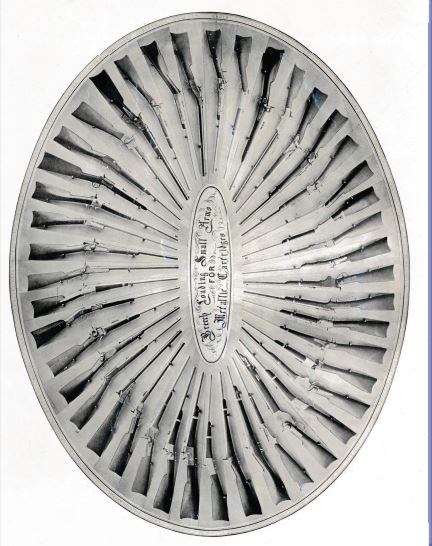