Collectors have adopted the term “campfire mismatch” to describe a military firearm with mismatched serial numbers where the numbers are relatively close to each other. Most often this term is used by those who have such a weapon for sale, undoubtedly in the hope of making a quicker sale since the implication is that such weapons are somewhat more “original'' than ones where the numbers are far apart. But intuitively there is some merit to this position. While we know that Civil War arms were not delivered to the U.S. military in serial number order, or issued in that fashion, in some cases where we know the serial numbers that were issued to a unit those numbers are often concentrated in a fairly narrow range. This is especially true where the records containing the serial numbers reflect the initial issue of arms to the unit. Unless they were previously used, when a large number of arms were issued to a unit they often were issued still in the original shipping boxes, just as they had been when they left the factory.1 Therefore, it is easy to imagine soldiers sitting side by-side around a campfire cleaning their weapons and possibly mixing parts in reassembling their arms. But proving this happened is a different matter entirely. Less than 5% of Civil War arms with serial numbers can be documented to the units that used them and probably only 10-20% of Civil War firearms have survived at all. Just finding a weapon with a single documented serial number is hard enough, so finding two serial numbers of a mismatched weapon that are documented to the same unit has to be an extraordinarily rare event. This article discusses two such arms.

Colt Model 1860 Army number 112465 was issued to Private Daniel Babcock of Company K, 9th Michigan Volunteer Cavalry, during the Civil War. Babcock was an interesting character. When he enlisted on 29 April 1863 in Coldwater, MI, he was an 18 years old farmer. His descriptive card in his service record says he was born in Canada and was 5’ 5” tall with blue eyes, light hair and a light complexion. Babcock was consistently present for duty until 4 June 1864, when he deserted. This was after having been tried in a regimental court martial on 10 March 1864 for some unspecified offence for which he was fined $13.00. He apparently was soon arrested and spent the rest of his enlistment imprisoned in Lexington, KY. This is unusual since at this time most deserters were returned to their regiments for punishment and then returned to duty if their commanders thought they would serve satisfactorily. In many cases this punishment was little more than loss of pay for the period absent and perhaps some brief confinement in the regiment. Whatever Babcock did must have been serious but so far we have not found records that explain why his confinement continued. He was mustered out of service on 21 July 1865, probably with a dishonorable discharge. 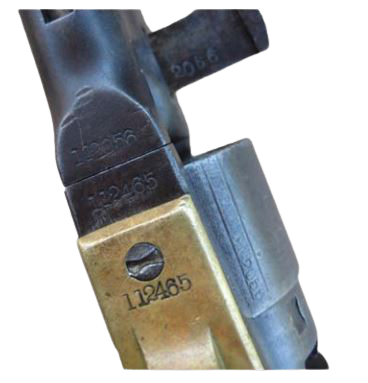 Number 112465 now has the barrel, wedge and cylinder from pistol number 112056 and they match the rest of the pistol perfectly in appearance. Number 112056 is also in regimental records as a “K” Company 9th Michigan pistol. Both of these factors strongly suggest this pistol is a campfire mismatch that occurred during the time both pistols were in “K” Company.

Colt number 112056 was issued to Sergeant William L. Keys, another interesting character but one with a dramatically different history. Keys enlisted in “E” Company on 22 January 1863 and transferred to “K” Company on 1 May 1863. He was 38 years old at the time of his enlistment. His record includes a regimental order dated 6 March 1863, before his transfer to “K” Company, showing he also had been tried and convicted in regimental courts martial for drunkenness. However, the order shows that in his case the unstated sentence for his offence was remitted due to his past good performance and his exhibited bravery. Unfortunately, Sgt. Keys was wounded in action on 7 September 1863 in an engagement at Cumberland Gap and died the following day.

I don’t have the specific shipping date of either of these serial numbers but guns in the 112000 range were shipped in the April-May 1863 period. The 9th Michigan was mustered into federal service in mid May 1863 and left the state for Kentucky shortly thereafter. The inventory list is not dated but appears to have been made in mid-1863, so these two Colts were in the initial issues of arms to the company.

Unfortunately it is impossible to say when and how this mixing of parts occurred. Both soldiers were in the company together from May until September 1863. There was little bloodshed in the Union capture of the Confederate garrison at Cumberland Gap and given the Union victory and the fact that Keys was mortally wounded, but not killed in action, it is not likely that his arms were lost in the engagement. His Colt most likely would have been retained in the company, since they were highly regarded and in short supply, and probably was issued to another soldier in the company.2 Likewise, Babcock’s absence from the company was short lived and his record does not indicate loss of his revolver. His revolver, assuming it was recovered, was probably issued to another soldier in the company also, so the mixing of parts could have occurred at any time after May 1863 and before 30 July 1865 when the company was mustered out of service. Assuming both revolvers continued in service until the company mustered out and were then turned in, there is a remote possibility that the parts were later exchanged at some Ordnance Department repair facility, but given the mixing of arms from many different regiments this is obviously unlikely. A post-war mismatch is even less likely with the second revolver to be discussed here.

Remington New Model Army revolver number 38651 was used by two soldiers of “M” Company, 2nd Maine Cavalry, Lendell C. Marston and Isaac Gough. In the case of this company, there are two surviving inventory lists, neither of which is dated. But based on the histories of the soldiers on the lists, the first of the two was made out sometime between February 1864, when the arms were first issued, and 8 April 1864 when one of the soldiers deserted, never to return. The other list is much shorter and can’t be accurately dated but was made sometime before 10 April 1865.

Remington number 38651 has a cylinder numbered “9130” and is almost certainly a “campfire mismatch.” As shown in the summary table below, a soldier named R. G. Bean had Remington number 39130 in the earlier list and Marston had that pistol in the second list. As with the above Colt, the cylinder finish and wear matches the rest of the pistol perfectly. Only the last four digits of the serial number were stamped onto the cylinder but, significantly, of the 101 documented “M” Company Remington serial numbers, the lowest was 28256 and the highest was 39998, but only two were below 30000 and neither included the number on this cylinder. So “9130” almost certainly is an abbreviation for “39130.”

The 2nd Maine Cavalry was organized in late-1863 to early-1864. The Ordnance Department sent 800 Remington revolvers and 800 Burnside carbines to Augusta to arm the regiment in December 1863. The regiment left the State for service in the Department of the Gulf in April 1864. Three companies participated in the Red River Campaign before the regiment was reassigned to west Florida in October, but most of the regiment’s actions were in small engagements in Florida and south Alabama. The most significant aspect of the regiment’s history as far as this article is concerned is the regimental casualty statistics, which actually may have led to number 38651 being mismatched. The regiment had ten men killed in action or mortally wounded but an incredible 334 men died of disease. The regimental history notes that many of those who did not die of dysentery, malaria or some other disease were often left sick in camp when the few who were healthy went on patrols.

This dug, fully loaded Colt Model 1860 Army cylinder confirms that some men carried a spare cylinder to speed the reloading process. However, the practice was not mentioned in any official records the author has seen. (Photo courtesy Dean Thomas)

Consequently, there were plenty of arms available for those healthy enough to use them. The author of the regimental history notes that some soldiers chose to take extra loaded cylinders for their revolvers when they went on patrols. Although we cannot confirm “M” Company soldiers did this, perhaps that is how the cylinder for number 38651 was switched, for note in the above table that Marston used both of these revolvers.

Lendell (also spelled “Lendall”) C. Marston was a 19 years old farmer when he enrolled in “M” Company, 2nd Maine Cavalry, on 31 December1863. He was 5’ 10” tall with blue eyes, light hair and light complexion. Marston was present for duty from munster in until February1865 although he was sick in quarters sometime in July-August 1864 and “absent in field since March 13” (on detached duty) in the April 1865 muster. He was still on that duty for the MayJune 1865 muster but was back with the company from July to October 1865. He was mustered out on 6 December 1865, at which time he bought his saber and Remington revolver for $11. In 1870 he and his wife Miranda lived in Farmington and he worked as a railroad brakeman. He died in1890.

Isaac Gough was born in England and was a 24 years old ironworker when he enlisted in Pembroke, Maine, on 14 March 1864. He was assigned as a recruit to “M'' Company in New Orleans on 1 May, which was probably when he was first armed.5 He was 5’ 10'' tall with blue eyes, light hair and a light complexion. Gough was listed as present for duty for the July 1864 through October 1865 musters and was promoted to corporal 1 April 1865. His record notes “July 1865, absent left at Barrancas July 28th/65” – probably meaning he was sick then and left in camp. He was mustered out at Barrancas on 6 December 1865. Gough died in 1893 and was buried in the Saint John Cemetery, Pembroke, Washington County, Maine.

The very few inventory lists that have survived give us the only insight we have into what specific arms a soldier used, when they were issued to him and how long he had them. But, as noted above, the dates are often ambiguous. I don’t see any way to determine more specifically when the cylinder of 38651 was changed but it most likely happened before the two pistols left the company, for Marston took his revolver (presumably 39130) home with him.

I would like to thank Tyler Anderson for the photos of Colt number 112465.

1 For example, in an early 1862 inventory of the Colt revolvers in

one company of the 12th Illinois Cavalry, the 70 revolvers in the

company included all 50 revolvers from one Colt shipping box.

one firearm, a pistol or a carbine, to cavalrymen. Some companies

were equipped as light cavalry (with pistols) while others were armed

with carbines. Other regiments chose to arm some men of each

company with each of the arms. But when the arms were available

company commanders would issue both firearms to their soldiers.

4 The regimental history mentioned is “The 2nd Maine Cavalry

In the Civil War, A History and Roster,” by Ned Smith,

on patrols is on page 41. However, Mr. Smith cites only a

secondary source of unknown validity for this assertion.

5 Gough is out of the alphabetical sequence in the first list. He

is listed in a small group of names at the end, which almost

recruit – after the list was first made. These lists were typically

and adding others, as with Gough’s entry, as the need arose.