In addition to reviewing recently issued books, we also take a retro look at some of the old classics from time to time.  Although most are out of print, copies are not hard to find at gun shows or from the book search sites noted in the Clubs, Organizations and Resources section of this magazine.  If all else fails, please contact us, we have access to a substantial source of used arms books.

Next to the arms themselves, books are the best investment a collector can make.  During the “golden age” of collecting in the 1930’s and 40’s, when great finds could still be made, the adage “buy a book for every gun” was coined.  At the time only a small fraction of today’s books were available.  Today’s offerings plus the internet allow us all to become expert in our areas of interest. 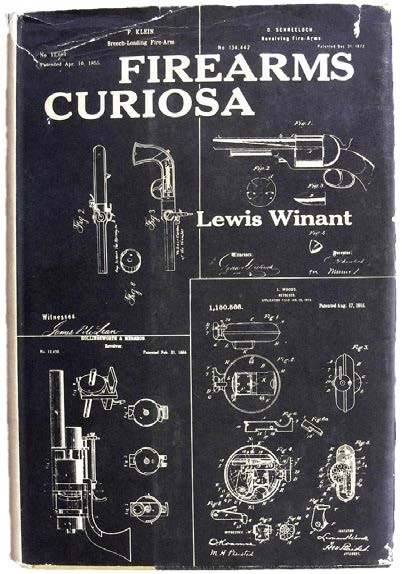 Even though this book is fifty-five years old, it is still the first reference I reach for in my firearms library of 4,000 books when I need information on Curiosa, or as Winant defines the subject “. . . strange and freakish gun fabrications. . . .”

The author describes over 300 firearms that are as unusual as pistols in knives and canes; pistols in flashlights, purses, ploughs, whips, bicycle handlebars, stirrups, keys, pipes, belts, sundials, and other very curious contraptions.

The first photo in the book shows an early collector wearing a metal vest with nineteen pistols attached. Later in the book a patent for a helmet with a semi-auto pistol embedded is described by the inventor as follows: The gun is automatically aimed to the turning of the head in the direction of the target, leaving the hands and feet free to further defend himself.

Those are some of the real curious curiosa. But much of the book is devoted to the less offbeat. There are chapters on two-barrel revolvers; two-cylinder revolvers; knuckledusters; squeeze pistols; belt buckle pistols; trap and alarm guns; knife pistols; chain guns; and various combination weapons.

This well written book is fun to just browse or to read through from first to last page. Much information on weapons curiosa is still available only in this book.

It is available for purchase here.

The French Trade Gun in North America, 1662  By Kevin Gladysz. 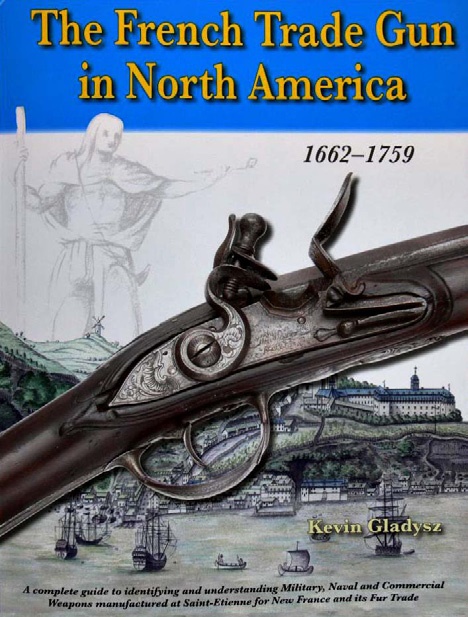 This book is currently out of print, but can be purchased on Ebay or through various resellers.

The content statement by the Author pretty much says it all about this very interesting and detailed book: “A complete guide to identifying and understanding Military, Naval and Commercial Weapons manufactured at Saint - Etienne for New France and its Fur Trade”.

The author has done an outstanding job of detailing and picturing this very important group of firearms that were provided by the French to the native population of French North America as well as citizens and soldiers.  It begins with a very complete history of the Saint-Etienne Manufactory showing production figures and pricing of the various types of arms and accessories along with very interesting of the period engravings of maps, facilities, forts and catalogs and very clear black and white photographs of rifles, fusils and fowling pieces that are discussed.

The following chapter of Saint-Etienne Firearms in New France discusses the decision to allow friendly Native nations to have these firearms as well as discussions of these same types of firearms being provided to French colonists and soldiers.  These include matchlocks, wheellocks and flintlock arms.  There are discussions of unserviceable arms as well as higher grade types.  As they had such value, they were often traded for numerous goods, most often for furs and pelts.  There are also discussions of arms for civilian use and interesting things such as the ordinance that in 1686 all colonists were ordered to have enough firearms to arms themselves as well as their servants and children of more than 14 years of age.

Throughout the book are examples of parts of these guns that were unearthed at various North American sites that support the author’s statements as to their configurations and markings that match those of known complete weapons.  Various arms throughout the period of interest are shown from several collections.  Shown also are examples of both actual and period engravings of the evolution of various parts such as lockplates, buttplates and sideplates with decorations and how those evolved.

There is a section on the marks and inscriptions that will help the reader understand the significance of arms with these various markings having never been discussed with such detail before.  The endnotes and Bibliography are particularly complete and helpful.  The research by the author is truly phenomenal.

Anyone interested in this period in our history will find this book to be extremely useful.

An Introduction to MBA Gyrojets and Other Ordnance By Mel Carpenter

This book must be ordered directly from  the author- the order form can be found here. 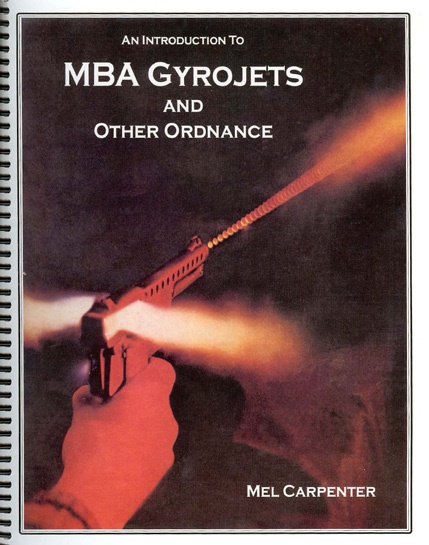 This is one of the most fascinating arms-related books I’ve ever read.  To those of us who recall the “James Bond” years, it will be particularly so.  The Gyrojets that many of us had a nodding acquaintance with are only a small part of the story.    (Gyrojets are actually used in the Bond movie “You Only Live Twice”)

MBAssociates (named for the Robert Mainhardt and Dr. Arthur T. Biehl) was formed by two disgruntled Aerojet-General employees.  They believed that solid fuel rockets could be scaled down for military purposes.  With funding from the research arms of the Government, they proceeded to develop a family of sinister miniature weapons that would have made Bond’s ordnance supplier,”Q” proud.

The Gyrojets were the only products that were marketed commercially.  They were sold as pistols, carbines and survival flares.  They never caught on commercially and were ultimately packaged and sold to collectors as curiosa.  Although these and other products used rocket technology, the term “jet” was used in many of their product names, probably because it had a better “ring”.

In addition to providing a thorough presentation on the guns and on the cartridges themselves, the proposed and experimental applications make wonderful reading for gun collectors, cartridge collectors, espionage enthusiasts and ordnance historians.

Besides a thorough presentation on the Gyrojets, much of the book is devoted to lethal and non-lethal gadgets for the CIA and the military.  Photographs and diagrams abound throughout this book.

Finjets were tiny, inexpensive fin-stabilized rockets that could be mass-fired in salvos to blanket a battlefield with millions of high velocity projectiles simultaneously.  Unlike normal gun-fired projectiles, rockets increase in velocity as they approach their targets.  Launchers could be as simple as hand-held cardboard tubes.  One photograph shows a cigarette pack set up as a finjet launcher.